Almost two months ago I anxiously ordered the new M1 13” iPad Pro and after a long wait it finally arrived two weeks ago. I’ve been using it exclusively together with the beta version of the iPad OS 15. Today I’m going to share my initial impressions, shared by someone who’s iPad is the main computer and who has been using the smaller, 11” version of the iPad Pro for the last 3 years. Here goes:

Back with the big iPad!

When the original, big 12.9” iPad Pro was announced in 2015, I immediately got it. However, after a while I started having doubts about having such a gigantic iPad in my life. Eventually I went back to the smaller iPad Pro. In 2017 I upgraded to the 10.5” iPad Pro and in 2018 to the 11” iPad Pro.

When the 11” iPad Pro was announced with a newer design, thinner bezels and without the home button, I thought it was the coolest looking iPad ever. At the same time the bigger 12.9” iPad Pro got the same design treatment and it became less bulky. I was tempted to get the bigger iPad, but finally I decided against it.

Last year, when the iPad Pro line got a refresh, I got the 11” again (in Space Grey color) and gave the silver 11” to my wife. I didn’t even consider the bigger size.

However, when Apple announced the new M1 iPad Pro with the cool almost-black-mini-led display for the bigger model, I was finally tempted to reconsider the bigger iPad size. Anxiously, I ordered it.

Today I’m typing on it.

I’ll do that for them. I’ll be calling this bigger iPad Pro 13”.

When the Magic Keyboard for the iPad Pro launched last year, I was one of the first people on the planet to get it and I found it to be the best accessory for the iPad yet.

I enjoyed the backlit keyboard and the way it magnetically mounts the iPad floating above it.

With the new iPad Pro I had to order the new Magic Keyboard and I went in line with Apple’s marketing materials and got the silver iPad Pro with the white Magic Keyboard.

Yes, the iPad is my main machine so I’m going to use this keyboard on all kinds of surfaces. It’s going to get filthy quickly. Or not. Time will tell.

Size difference? No problem for my typing experience. In the beginning I got a few keystrokes wrong but I quickly got used to the bigger size. When typing on a keyboard bigger is obviously better. Even for someone with tiny fingers. 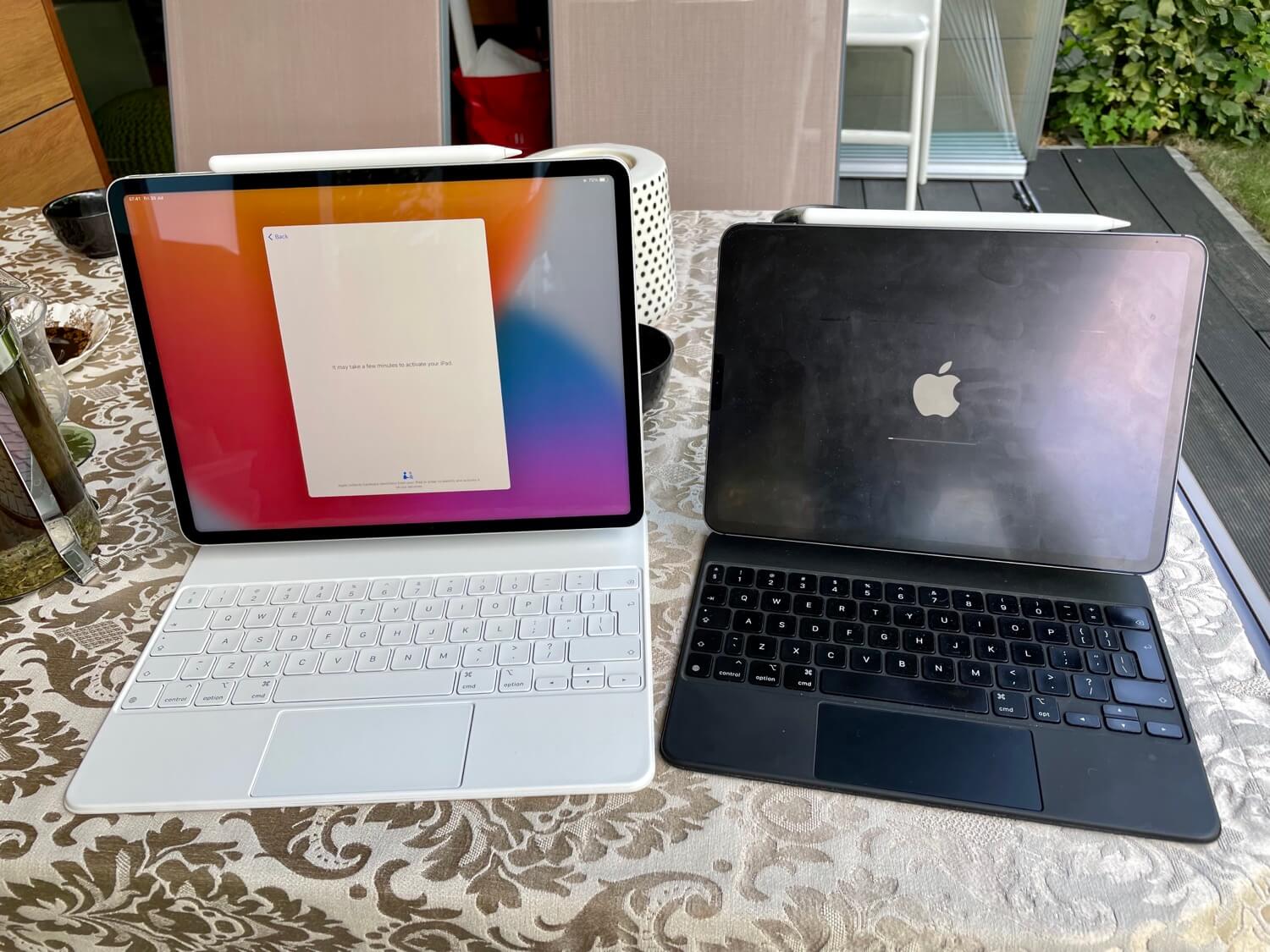 Bulk is almost the same! Weight is barely noticeable.

The one big drawback of the otherwise-amazing Magic Keyboard is it’s weight. It’s heavy. Together with the iPad Pro it makes the whole package pretty heavy. More than 1 kg for both iPad sizes. The 11” package weights 1072 grams and the 13” almost 300 grams more for a total of 1362 grams. The bigger iPad Pro weights the same as the 13” MacBook Pro.

Yes, when I compare the two, holding the smaller in one hand and the bigger in the other, the smaller one is lighter. Duh! However, it’s not that much lighter.

In practice, as both weigh more than 1kg, my perception is that they weigh almost the same. I haven’t noticed much of a difference in day-to-day use over the last two weeks. That’s good.

One-handed use is still possible and I do enjoy it!

My biggest concern about the bigger iPad was its portability. Especially taking it out of the Magic Keyboard for casual tablet use when reading articles, scrolling through Twitter or watching YouTube videos.

It turns out it’s all good.

I’m still using this bigger iPad the same way I was using the smaller one - mainly in Magic Keyboard when writing and working, but taking it out for tablet use when reading and browsing. I can hold it with one hand easily and jot down notes with the Apple Pencil ✏️. 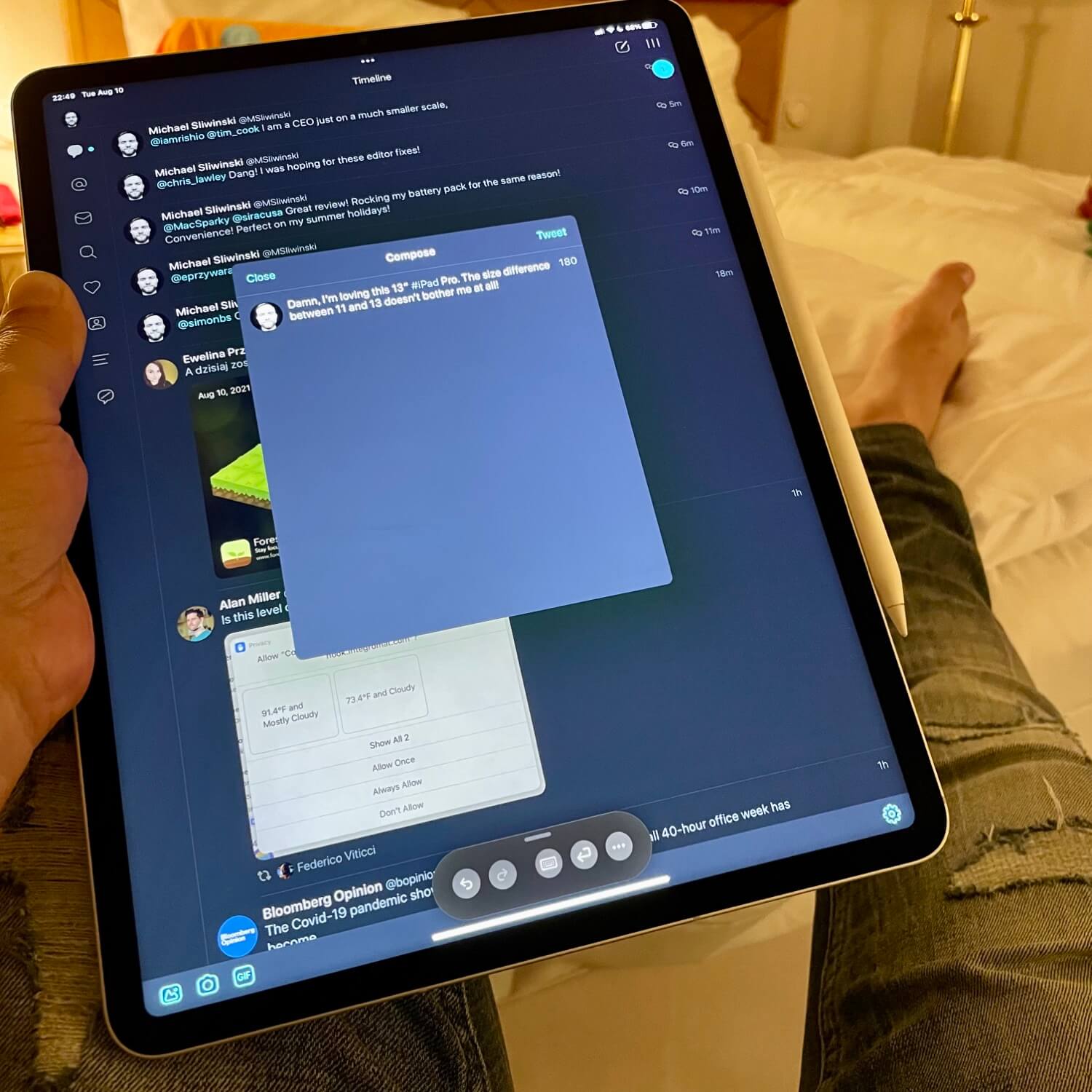 The mini-led screen is a mixed bag, but I enjoy the screen real estate!

Having more screen real estate is great. Together with new multitasking features of the iPadOS 15 working on this machine is a bliss. I keep having several sessions/windows of my favorite apps ready to rock. I’m typing this article in split view on iA Writer at 3/4 and Safari at 1/4 open with all my articles about the iPad for reference.

The mini-led display is great for a dark mode person like myself. I do appreciate the darker blacks of this screen.

However when watching something at night, I do notice some blooming around white objects in the apps. Here’s an overblown version of this: 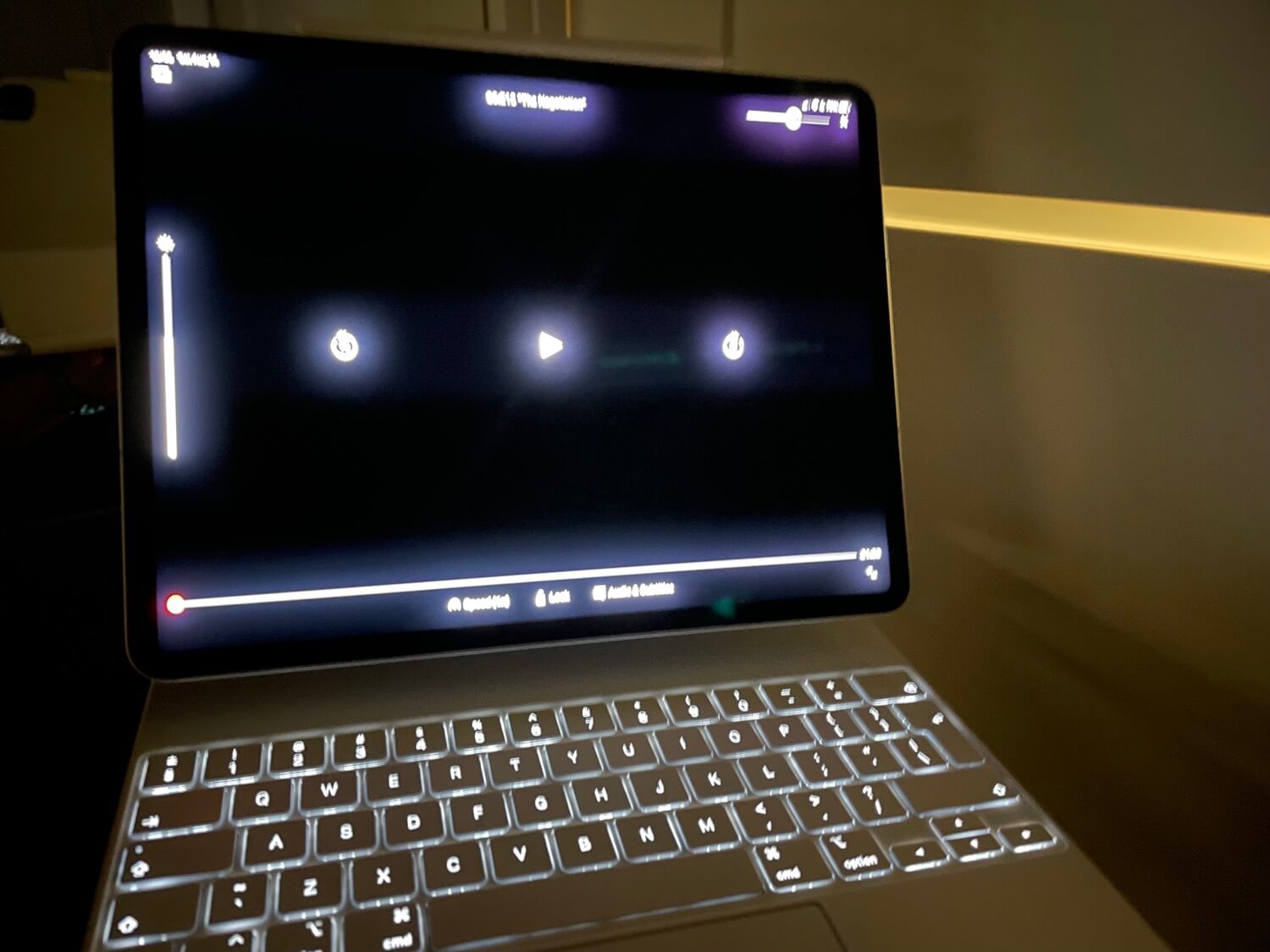 Please note that the night mode of the iPhone really blew the blurs out of proportion. Normally they’re not that visible, but they are there, definitely. Again, it’s only noticeable in a very dark environment.

I wasn’t sure about upgrading to the bigger iPad. I asked around. I talked to people. I interviewed my buddy, Augusto, who’s been using bigger iPads for a while. 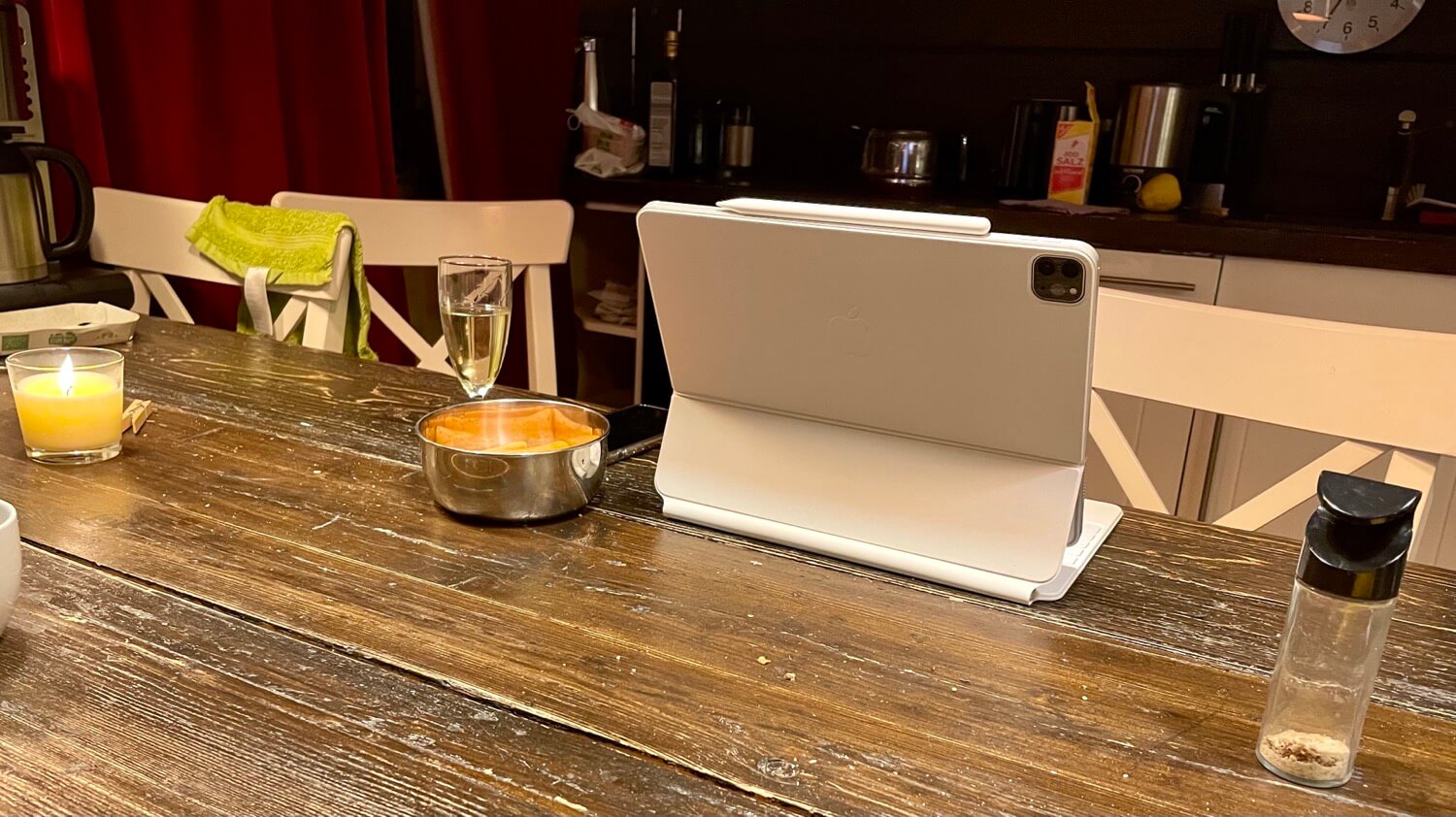 Anyway, I don’t regret the decision. Quite the contrary. I’m actually very happy with the new, bigger iPad. As always, your mileage may vary.

P.S. Listen to the No Office podcast for more!

For more of my thoughts on the new 13” iPad Pro, check out episode #26 of the No Office podcast, which I recorded on this very iPad: 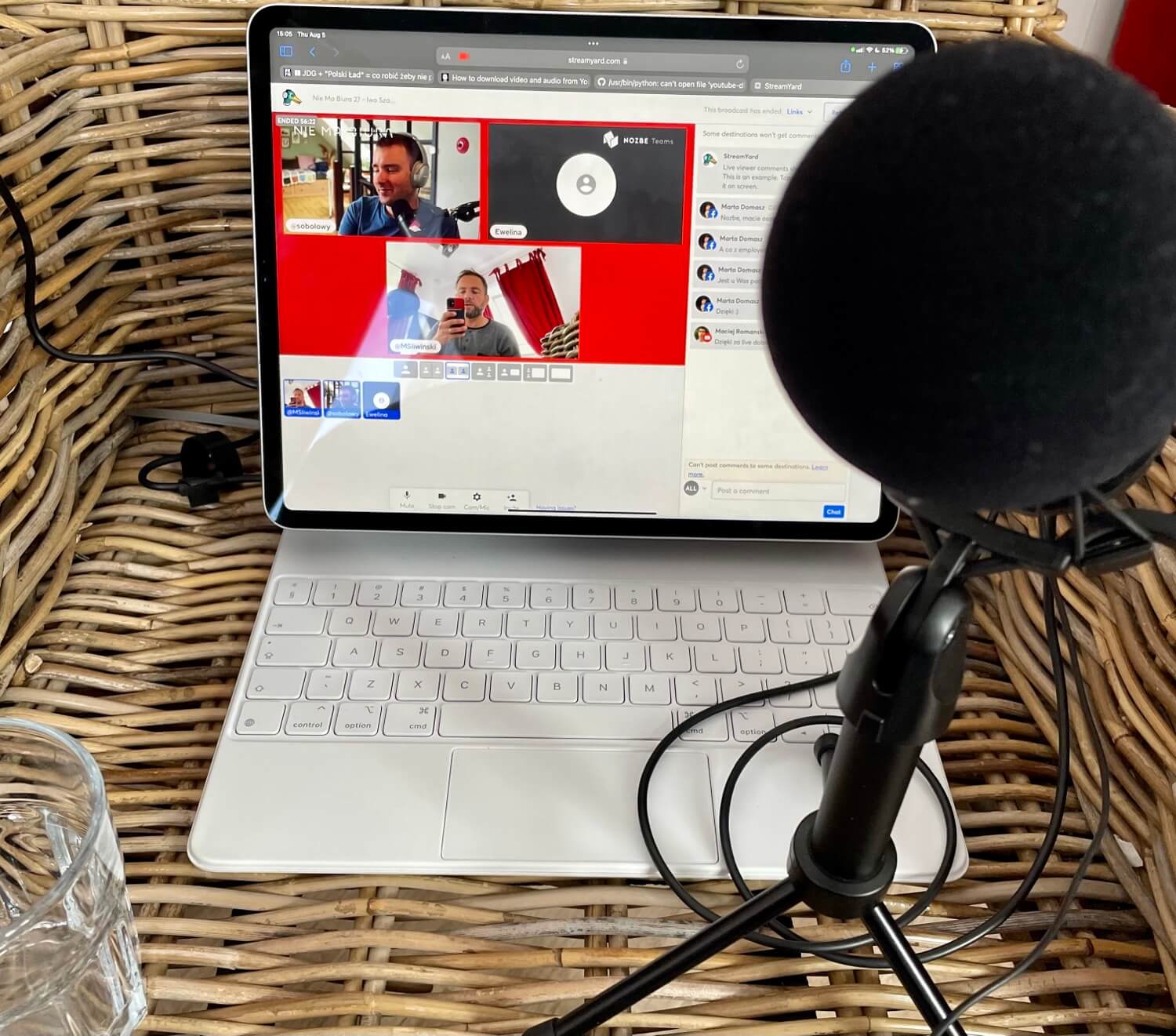