While the title of this article might be phrased as a question, those who know me already know my answer, which is: “Of course, the iPad is already being used for work!” I’m unique that way because I’ve been using my iPad for work for more than five years now – since iOS6… Meanwhile, many people still don’t consider the iPad to be a “serious” machine for work. This article is dedicated to them. 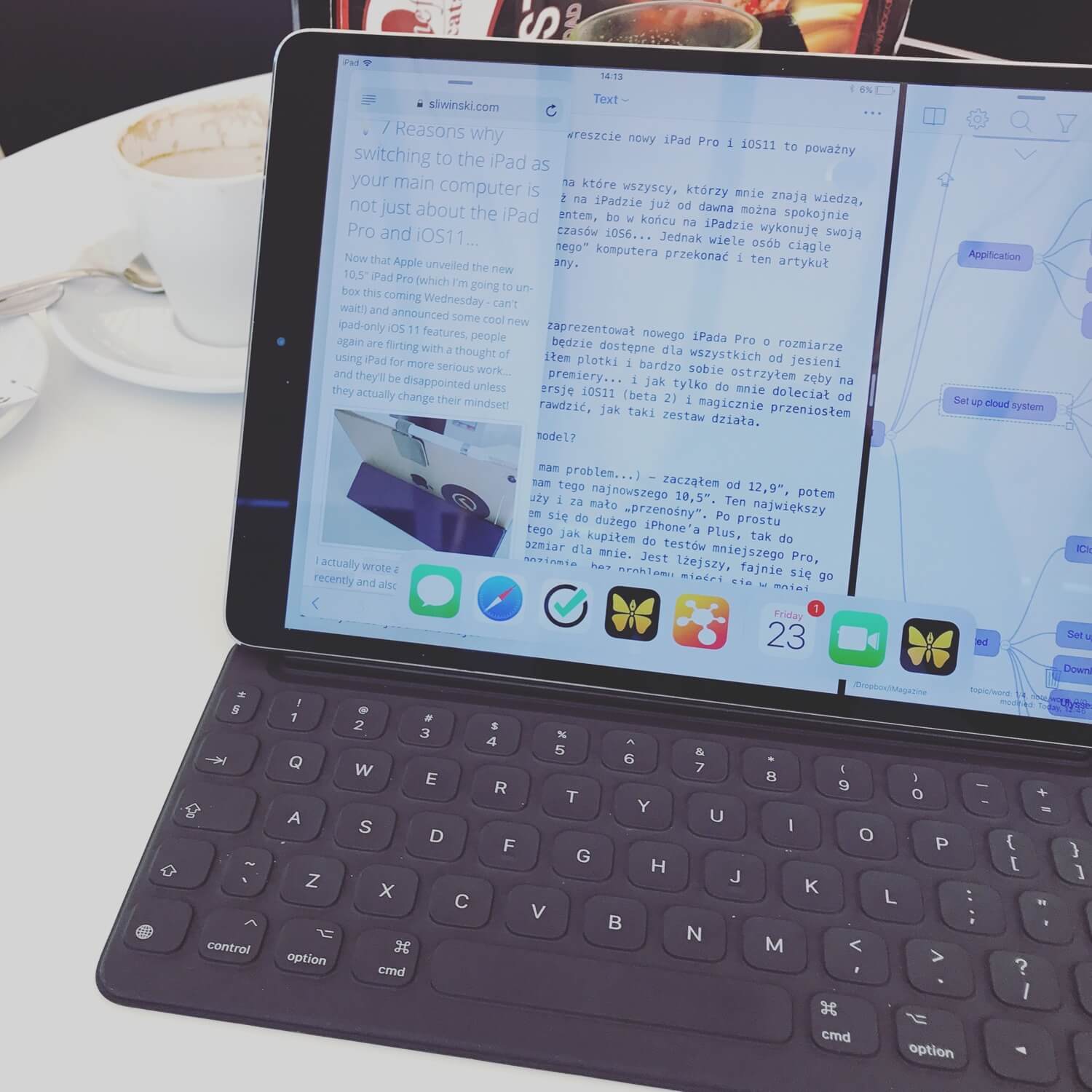 Note: The following article appeared first in the July ‘17 issue of iMagazine - the leading lifestyle magazine for Apple enthusiasts in Poland. I’m a regular contributor and write my monthly productivity column there.

The new iPad Pro and iOS11

A few weeks ago at WWDC, Apple revealed its new 10.5” iPad Pro and previewed iOS11 which will be released to the general public in the fall. Since I’ve been following rumors for some time, eagerly waiting to get my hands on the new iPad, I ordered it on the day of its launch, and when it finally arrived I immediately installed the pre-release version of iOS11 (beta 2), and… I jumped into the future! Read on to check out how this combo really works…

This is my third iPad Pro (yes, I know what you’re thinking…). My first iPad was the 12.9” model. Later, I bought the 9.7” version, and recently I got the new 10.5” iPad. The largest iPad Pro turned out to be too big for me and wasn’t portable enough. It was simply way too cumbersome. While it didn’t take me long to get used to the large iPhone Plus, somehow I couldn’t get accustomed to the huge iPad. That’s why, when I bought the smaller iPad Pro, I immediately realized it’s the perfect size for me. It’s lighter, comfortable to hold in both horizontal and vertical mode, and easily fits into a small bag or briefcase. It’s simply perfect. So when I heard that the new iPad will only be slightly larger but will have a much bigger screen, I couldn’t resist getting one.

I don’t really feel the difference in the size. The device easily fits inside my bag, and the screen is definitely bigger, which is especially noticeable when it’s held vertically. What’s more, the new 120Hz refresh rate works magically smoothly! It’s almost unreal. I can’t even describe it – you just have to experience it. Because of its bigger screen and resolution that’s higher than 1024, most websites treat this iPad more like a computer than a tablet. In practice, that means more content on the screen. Isn’t that great?

I ordered the device in the only “proper” configuration – 256GB (middle tier) with LTE (which keeps me online all the time) and a Smart Keyboard in the English international layout. I didn’t have to buy the Apple Pencil because I already had one from my previous iPad Pro.

The new iOS11 is heavily iPad-oriented

So, let’s start with the dock. It’s similar to the Mac. It took me some time to get used to it but I’ve already put all of my main apps there. The dock can be accessed by swiping up from the bottom of the screen. It’s very convenient for switching between apps and activating the split view. On iOS11 this works slightly different than on iOS10 but I got used to it pretty quickly, and I’ve already noticed the advantages of the new approach. As for the Control Center – it’s now combined with a view of currently running apps, making it a lot easier to view everything with just one swipe.

Drag and drop… wherever you want!

Now this is something I’ve been waiting for! And it works great because with multi-touch you can drag and drop multiple things at once. This feature doesn’t just work in system applications. For example in my app – Nozbe – which supports this gesture on the Mac, it worked out of the box immediately after installing the new version of iOS. All I need to do is open a task in Nozbe, drag and drop an image to this task, and voilà: the image is automatically added as a comment. Pure magic. At last!

In general, the whole iOS11 system is heavily “drag-and-drop” oriented. This gesture is used for dragging apps from the dock, entering into split view mode, and opening a “floating” window. It’s very convenient but requires changing old habits.

In iOS11, Apple introduced “Files,” which is the new Finder app for iOS. In reality, though, it’s just a slightly modified version of “iCloud Drive” from iOS10. It will however come with integration with Dropbox and other third-party apps (not available in the beta version, so we’ll have to wait until fall).

Is everything ready for “iPadOnly”?

With all these changes – the release of new iPads and a new system – many people believe that the iPad will finally become a serious alternative to the Mac for doing work. But the truth is that it already was one!

On the one hand, I must admit that the new features really do improve operation. Even though I’m using the pre-release version, working on it feels wonderful and I already like the new approach to windows, files and drag-and-drop. On the other hand, if you’re expecting that you’ll be able to work on the iPad exactly like on the Mac and retain your productivity level, you may be disappointed.

Switching to the iPad requires a change of mindset!

One app at a time!

Even though it’s now possible to open two apps side by side and even add a floating window, the basics of working on the iPad haven’t changed. Usually, we do our work in one main window, in one specific app; the remaining windows are additional. For instance, while writing this text I’m using two apps: Ulysses (in which I’m writing this text) which is set to 75% of the screen and iThoughts (in which I’ve created a mind map for this article) occupies the remaining 25% of the screen. The text editor is my main window, whereas the mind map serves as an additional window, showing me the outline for this text on the side of the screen.

When I switched to the iPad as my main computer, it wasn’t possible to open apps side by side on iOS6, so I often opened one on my iPhone. Today, even though everything is much simpler, I’m still working in one main app. Actually, working this way is better because it helps me concentrate.

On macOS, everything revolves around files. On the other hand, iOS is centered on apps. Even though the new “Files” app allows sharing files between multiple apps, it uses a different approach.

When you want to do something on iOS, you open an app, not a file.

What’s more, very often when using these apps, we don’t operate on files but on other resources (Evernote notes, tasks or projects in Nozbe, etc.). As I’ve said before, I believe this approach makes it easier to focus on the work. It teaches us that by opening an app you can do one thing but not another – each app has its purpose and function. This kind of approach promotes productive work and concentration on the task at hand.

Apps instead of websites

It’s a similar case with websites. When I’m using the iPad, I don’t visit sites like Amazon.com, IMDB.com, Booking.com, Ryanair.com, etc. For frequently used services I download the dedicated apps and use that instead. Many of them are really well made – they use iPad’s gestures and look simply beautiful. Much better than their respective websites.

On the iPad I use the Internet as often as on the Mac, but I’m using apps instead of my browser.

This leads us once again to the argument of “one app at a time,” and I have a feeling that by using these separate apps, I’m able to achieve better focus than when I’m working on the Mac.

Through touch everything is closer…

It’s hard to describe, but working on a touch screen is simply more… fun, and it also seems more “personal.” By touching the screen and interacting with apps using fingers and gestures, I feel closer to what I’m doing. Regardless of whether I’m working or “consuming content,” I’m much closer to everything than when using the Mac.

I know it may sound strange, but when I’m working on the iPad, I feel that I’m more effective, and work gives me more pleasure. Working in one app at a time with the option to use touch helps me concentrate. I feel more connected to what I’m doing.

The cloud: a must-have!

When I started to use the iPad for serious work in 2012, I had to move all of my files to the cloud. I bought a Dropbox account and moved all of my data there. Currently, I keep everything in the cloud – files, notes, tasks, projects, photos, presentations. It allows me to have access to all of my resources both on the iPad and Mac.

If you’re planning to use the iPad for work, you’ll also need to go through this stage and put all your data into some kind of cloud service. This way you’ll never be missing any files.

But enough with the theory. Let me show you how this all works in practice with the example of writing this article on the iPad:

From nothing to working on the new iPad in a couple minutes!

After unpacking my 10.5” iPad Pro, I decided to configure it from scratch instead of restoring it from the old backup (because I’ll be testing iOS11 on it). Here’s what I did:

After a while I installed a few more apps, here’s the complete and up-to-date list

How did I write this article?

I made a mind map in iThoughts, then I proceeded to write the text in Ulysses. When I finished, I sent the text via Dropbox to my assistant for proofreading. Later, I pasted the revised text into Ulysses, exported it to Pages, read it one final time and sent it to iMagazine via email with attached images. That’s all.

Everything was done on the iPad, via the cloud and without hassle on the new iOS 11.

That’s what I call: Getting iPadOnly Work Done!