As you know, I’m a huge iOS fan. I love iPads. Worse. I’m the “mad guy,” who went completely iPad-only and uses it as his main computer – for work and fun. And when I’m not using my iPad, I use my iPhone Plus. That’s why, when six months ago Apple showed the even bigger iPad Pro, I decided to buy it straight away. But getting used to working on it was a little more complicated. For several reasons… 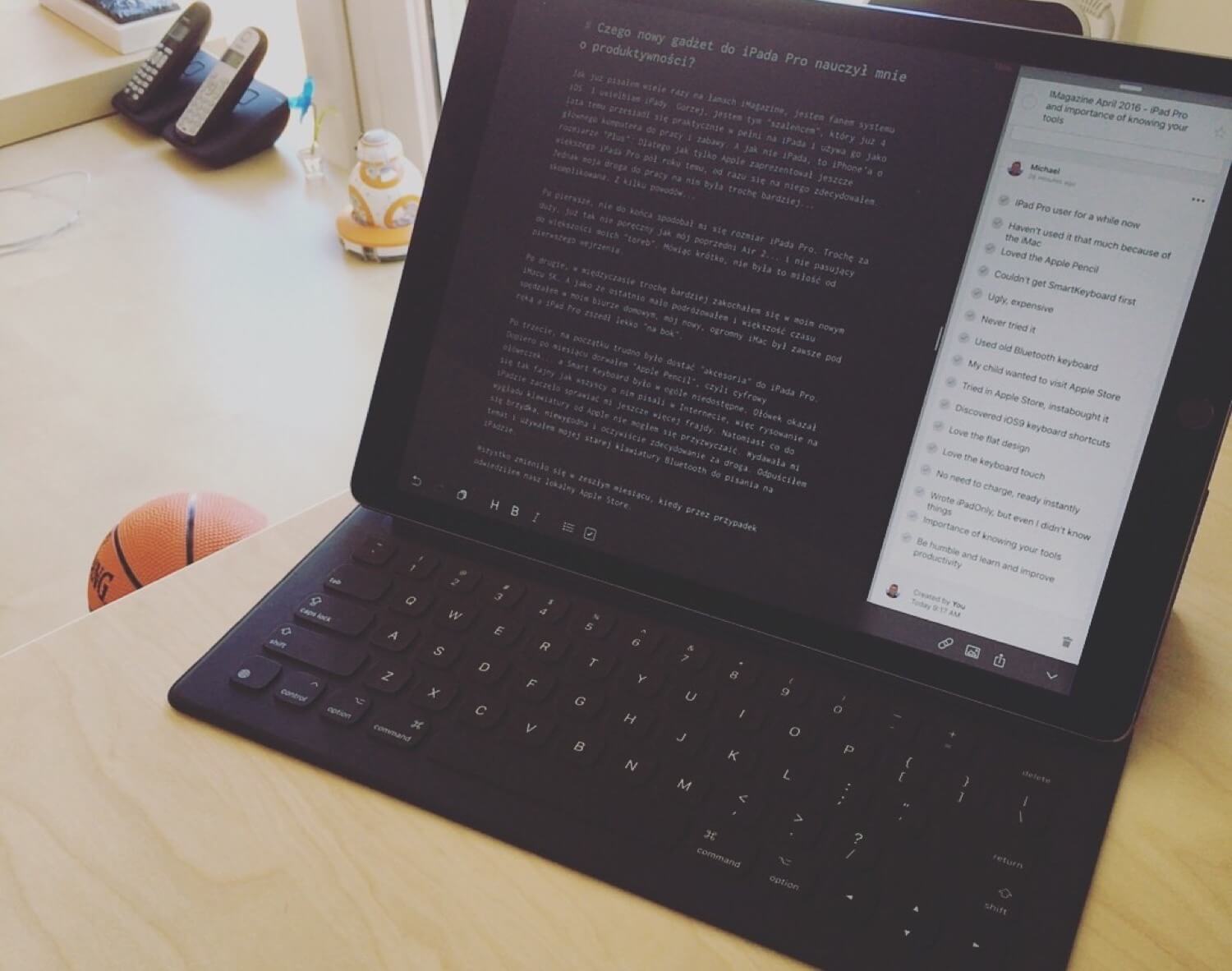 Note: The following article appeared first in the 4/2016 issue of iMagazine - the leading lifestyle magazine for Apple enthusiasts in Poland. I’m a regular contributor and write my monthly productivity column there.

First of all, I didn’t quite like the size of the iPad Pro. A little too big and not that convenient as the Air 2 - I thought… And it didn’t fit in most of my bags. In short, it wasn’t love at first sight…

Secondly, in the meantime, I fell a bit more in love with my 5K iMac. And because I didn’t travel that much then, spending most time in my home office, my huge iMac was always at hand. As a result, I didn’t use my iPad Pro too often.

Thirdly, it was really difficult to get accessories for the iPad Pro at the beginning. It took a month before I got the Pencil… The Smart Keyboard was completely unavailable. And while the pencil turned out as great as it sounded in online reviews, and drawing with it was even more fun, I couldn’t get used to the keyboard. I thought it was ugly, uncomfortable and definitely overpriced. I gave it up and used my old Bluetooth keyboard instead.

Everything changed last month, when I accidentally stepped into the local Apple Store

Like a typical family, one day we went shopping together. While my wife enjoys such trips, my daughters and I quickly get bored. That’s when my kids suggested going to our favorite “gardening tools supplier” – meaning the Apple Store. It has an iPad stand for children, where my elder daughter always discovers new games and has a lot of fun. In the meantime, I have time to test new Apple accessories. That day, I noticed a new stand with iPad Pro’s and Smart Keyboards… and I decided to try one out.

Why I love it

Actually, I’m using it right now to write this article on my iPad Pro in 1Writer. I love it!

Why? Because it’s so comfortable to type on, it has a nice key travel and it’s flat.

The design is also beautiful but it could come in a greater variety of colors.

What’s more, it takes up very little space when it’s folded. While in Apple’s marketing materials it looked ugly and big, in reality it’s only slightly thicker than my old Smart Cover. I don’t feel like I’m walking around with a keyboard at all!

What I also love about it is that you don’t need to turn it on or pair it via Bluetooth - iPad discovers it instantly!

The last great thing about the keyboard is iOS9’s abundance of keyboard shortcuts. Until now, I’ve been using only those which I knew, but buying the keyboard forced me to read more about iOS9’s support for it. And I have to admit – it’s great. It’s way better than before. Way better than when I was writing my “iPadOnly” book.

Exactly. And it’s me who should be an expert in doing work on the iPad. It turned out that I had to do a lot of catching up.

This story isn’t about a specific keyboard. I just wanted to draw your attention to one of the basic productivity rules – you really need to get to know your devices to use them to their full potential.

I had an iPad Pro… but it turns out I didn’t know it that well.

I didn’t check how the Smart Keyboard works. I didn’t learn the new iOS keyboard shortcuts. And I’ve been using it for over half a year! I’d be a lot more productive and happy if I did it in the beginning.

That’s why you should spend time on exploring various topics, reading manuals and checking out new devices or accessories. It will pay off.

It turns out that even someone who uses his iPad for work and even wrote a book about it, also has to improve his skills. All of us do.

In the next few months I’ll be traveling a lot, and I’ll surely take my iPad Pro and the new keyboard with me, so I’m drawing conclusions and trying to discover the full potential of my iPad.