Recently I wrote about my new 2023 home office setup where the key part of it is the M1 MacBook Air. Some people reading that article got a wrong impression that I’m no longer #iPadOnly. They thought I ditched my beloved 13” iPad Pro. That’s not true. Quite the contrary, the iPad is still my main computer. In fact, I’m writing these words on my iPad. I’m doing most of my creative work on the iPad. But… the M1 MacBook Air is an important back-stage/secondary computer and that’s why I need it in my home office: 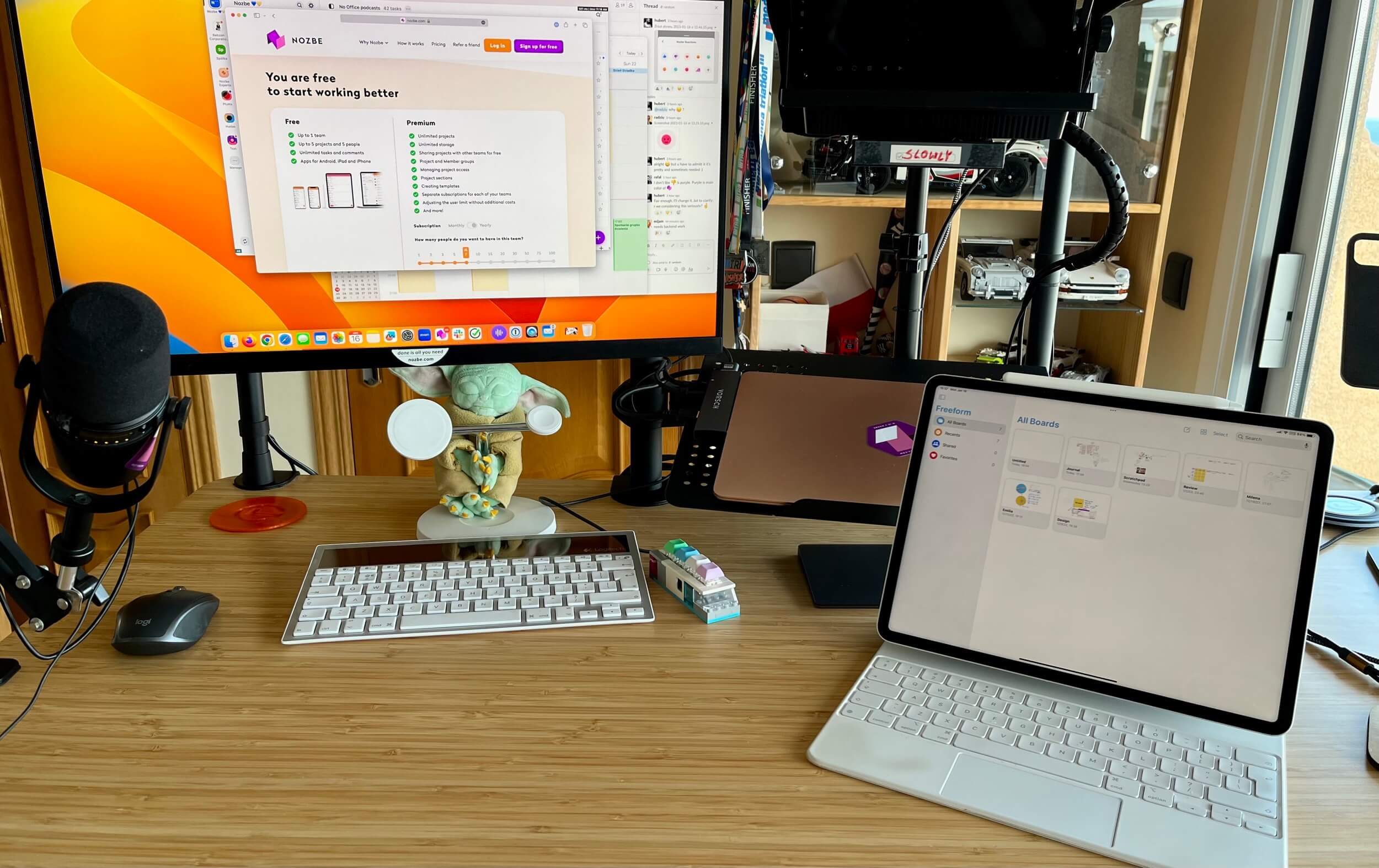 I travel only with the iPad Pro

Even though I have a laptop as my Mac now, I hardly ever take it out of the home office. I almost always take the iPad.

Since I wrote the 3-month review of the iPad Pro this machine has only gotten better and simply more joyful for me. I love the form-factor, the iPadOS16, the apps and everything about it. It’s a tablet, it’s a laptop (with Magic Keyboard) and it has a perfect balance of size and weight.

The 13” M1 iPad Pro is my most joyful computer ever.

There, I said it.

I do most of my meaningful work on the iPad Pro

My iPad is still my main computer. But…

Why I need a Mac in my home office and why the M1 MacBook Air 💻 is perfect for the job?

A Mac in the home office is a perfect secondary computer and it serves several important purposes:

The Mac has 1TB of space so it downloads all of my photos, Dropbox and iCloud files, everything I need to be able to access online. Later I use BackBlaze to backup the computer entirely to the cloud.

Separately I also run a Time Machine to an old Time Capsule with an attached 4TB hard drive. This way I have the computer also backed up locally.

Two backups of all of my data. Better safe than sorry.

M1 Bonus: it doesn’t break a sweat when it’s backing up data. No fan noise, no sweat, no slowdowns. It backs things up in the background while giving me the full power of the Mac at all times.

As I detailed in the post about Office 2023 and streaming, I have everything set up on the Mac to do meetings with my all-remote Nozbe team, record podcasts and webinars.

Doing these things on an iPad is doable but it’s not easy. With the Mac I have all the gear connected - the camera, the microphone, the works. There’s no barrier of entry. I’m ready to record anything, anytime.

M1 Bonus: the computer is completely silent. When my previous Intel iMac would turn up the fans, the M1 is fan-less and is completely quiet. And it doesn’t matter if I’m having a short video call or a longer recording.

3. Extra canvas for research with a big 27” screen

When I’m doing research I actually prefer to be in my home office because I have this gorgeous 27” screen where I can open many browser windows and documents at a time.

It’s like having a vertical desk with lots of space to play with!

M1 Bonus: I can have two additional monitors if need be! With the M1 processor it’s very easy to switch between one or two screens. It takes literally a second. Very often when I’m doing even more research, I open the MacBook Air up and use its internal display as well as the external 27” one. 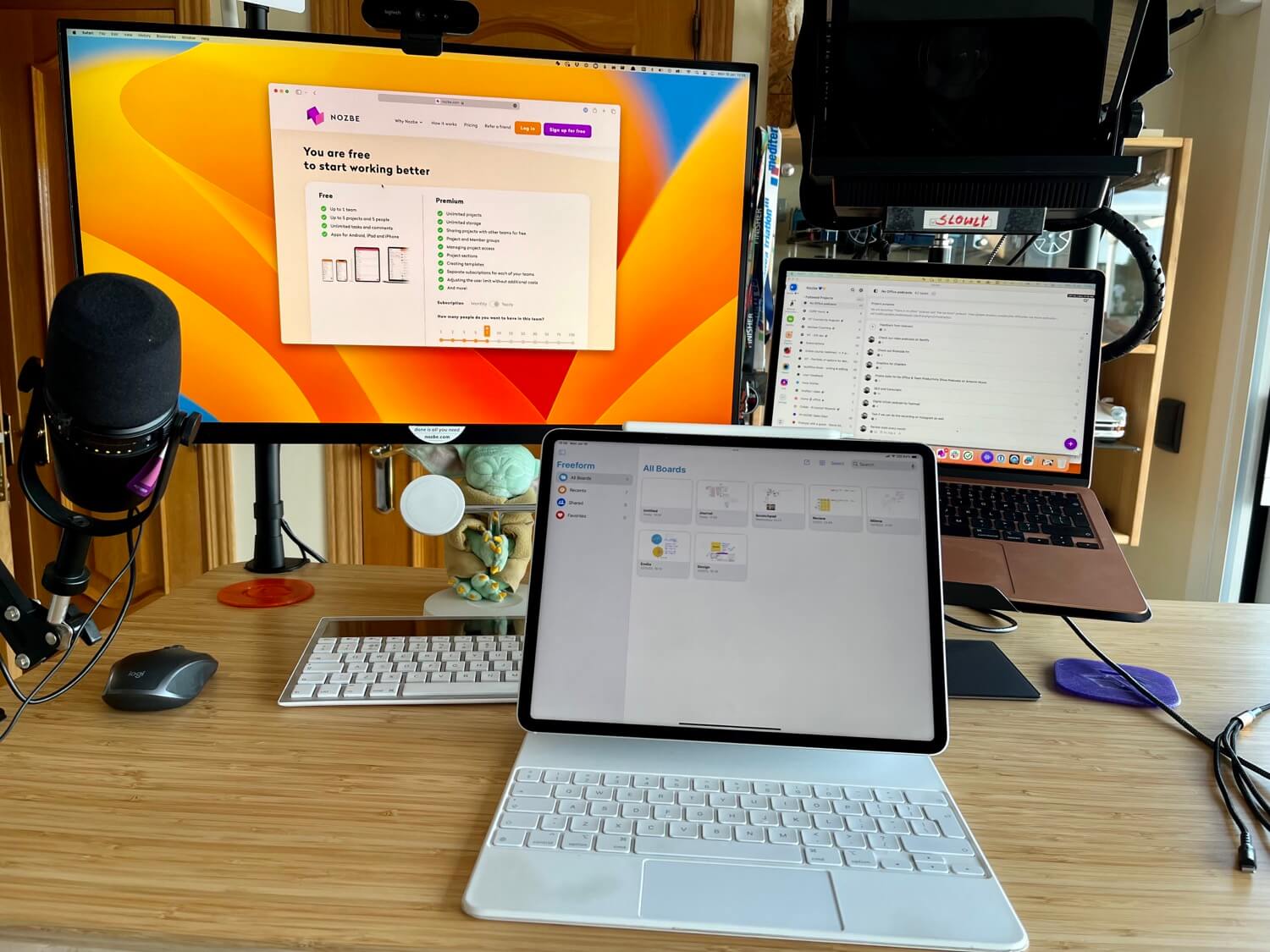 Bonus: the Mac stuff in a MacBook Air shape!

While I love working on the iPad, the iPadOS has some limitations. Especially when I need to do some batch work on files or use some Mac-specific piece of software. I don’t need to to any of that all too often but every now and then the Mac comes in handy.

Also, because it’s a laptop, I can sometimes take it out of the desk and just work in it in a different room or on a couch. It is a great all-around Mac computer - to me it’s both a desktop and a laptop.

M1 Bonus: long battery life! This comes in handy if I want to use it outside of my home office. There’s no need for a power cord because the battery life is so great on this device. Also, it’s like having a UPS included. If there’s an issue with electricity, the battery keeps the Mac running!

I started with a MacBook Air and now I have one again!

Back in 2008 the MacBook Air was my first Mac and I was amazed how much better it was than any other computer I owned.

Now, fast forward 15 years and I’m writing these words on the iPad while having the M1 MacBook Air as my home office computer.

The return of the MacBook Air in my life.

The return of the Jedi.

With the M1 MacBook Air and the M1 iPad Pro - may the M1 force be with me!