Today let’s talk cutting-edge technology. Firstly, we’re fresh off of WWDC where Apple announced a lot of new improvements to its operating systems, so I couldn’t wait to try them out. Secondly, I couldn’t wait so much that I installed iOS10 on my test iPod Touch (6th generation) and iPad. I also installed macOS Sierra on my test Macbook, which I’m using right now to write this article. That’s right. Today I’ll focus on the new systems and their improvements based on my own experience in using them on my test equipment for a week instead of the experiences of other bloggers. So everything is from a tester’s point of view. 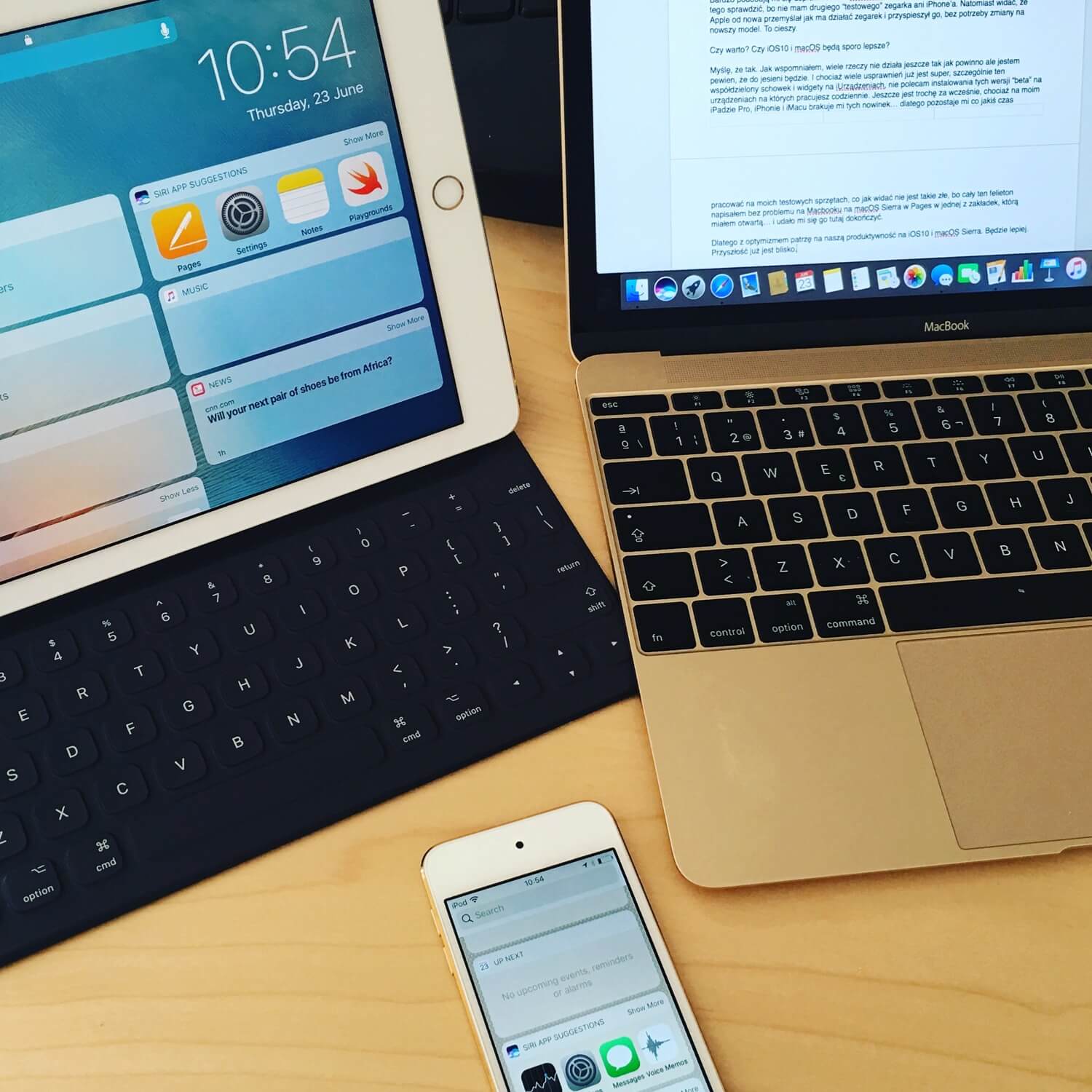 Note: The following article appeared first in the 7/2016 issue of iMagazine - the leading lifestyle magazine for Apple enthusiasts in Poland. I’m a regular contributor and write my monthly productivity column there.

First of all, there’s a new lock screen – that is, the screen you see before unlocking the device. Apple’s designers made the right decision to move the widgets to the lock screen because now you can get a lot of things done without unlocking your phone or tablet. The widgets look good, especially on my iPad, and they’re quite big.

Last year when we introduced the Nozbe widget we were very pleased with it, but over time we noticed that it doesn’t get much use. That’s because it’s hidden so deeply that using it is simply pointless. Now it should be much easier.

If the apps which we use most often have good widgets, our productivity will increase because we’ll be able to get a lot of stuff done without unlocking our devices. I like this direction and I can already see the potential in using embedded app widgets, even though most external iOS10 apps are not working yet.

Several changes to iMessage will also have a positive impact on the way we use this form of communication. I’m not a big fan of stickers but sometimes I miss the more varied forms of expression in iMessage. Now it’ll be possible. Isn’t that great? What I like most is the ability to draw your own objects and stamps.

But what will really boost my productivity is the ability to write in multiple languages at one time. At work my main language is English and switching between keyboards all the time was annoying. Now I’ll be able to write one sentence in English and the next one in Polish. So far it works quite well. Now that’s something I’ve been missing for a long time!

While writing about the new features and improvements it’s hard not to mention the clipboard which now works across devices. And it actually works! Before writing this text, I copied an address to the clipboard on my iPad and pasted it on my Macbook. If it could also keep the history and allow me to paste a few things at a time I’d be in heaven… but for that I’ll be using “Clips” on iOS and Alfred on Mac. Nonetheless there’s progress and the feature works, so it’ll allow me to be more productive.

Let’s move on to the Mac which I’m using to write this article. Actually, I wanted to write part of it on my iPad in Pages but on iOS10 the app doesn’t even open. Like most additional iOS10 apps. Oh well, writing on the Macbook is also cool. Especially that we have Siri…

And for some reason she’s a he on my Macbook and for that matter, not a very smart one. Watching the WWDC Keynote you get the impression that you can ask Siri about anything and that she’ll get you the facts. Unfortunately, it’s not that good in practice. When I ask her about the weather in Warsaw she gives me the forecast but when I ask her again “and in Cracow?” instead of telling me what the weather is in this beautiful city, she shows me an article on Wikipedia about Cracow. What’s more, her response is too often: “Here’s what I found on the web for…”, so it’s still pretty weak.

I know, it’s hard to do it well. But for me the problem is that if it regularly fails me, I simply stop even trying. Siri was the reason I bought an iPhone 4S in the first place. Now I have an iPhone 6S and still use Siri only rarely because I simply don’t trust her. I just don’t believe that she will actually answer my questions. Another disappointment is the fact that Apple released the Siri SDK but only for a very limited set of apps and commands, so we still won’t be able to completely legally add something like: “Siri, add a task to Nozbe, to buy flowers for my wife”.

In macOS Sierra, Apple introduced support for bookmarks in many apps in which we work on several documents at once. We’ve had bookmarks in Finder for quite some time, but now they’re available in Maps and even Pages… although something is wrong here because CMD+T doesn’t open a bookmark in Finder, only a dialog window for selecting a font. I hope they’ll improve it before publishing macOS Sierra.

Again something that looked great on the demo – watching a video in the corner of the screen while working on something else. I’m having two problems with this. The first fundamental one - let’s not fool ourselves - is that while watching something, it’s difficult to work at the same time and when we’re focused on something, we can’t really follow what’s going on in a video… but we can try to fool ourselves :-)

The second thing is that it looks great on the demo, but in practice it works only in the macOS version on some Vimeo video clips. YouTube and even native Quicktime (for example, Apple Keynote) don’t support it yet. It doesn’t work.

I didn’t test the Apple Watch yet

I really like the improvements in watchOS3 but I haven’t been able to test them yet because I don’t have a second “test” watch or iPhone. Clearly Apple rethought how the watch should work and improved its speed without changing to a new model. I’m really pleased about this.

Is it worth it? Will iOS and macOS be better?

I think so. As I’ve already mentioned, many things don’t work as they should yet but I’m sure they’ll be fixed by fall. And while there’s already a lot of great improvements, such as the shared clipboard and widgets for iDevices, I wouldn’t recommend installing the beta versions on devices that you use for everyday work. Although I miss these new features on my iPad Pro, iPhone and iMac, it’s still a little too early… All I can do is work on my test devices from time to time, which apparently isn’t that bad as I was able to write this article entirely on a Macbook running macOS Sierra in Pages in one of my opened tabs… and I was able to finish it here.

That’s why I’m optimistic about our productivity on iOS10 and macOS Sierra. It’ll get better. The future is already close.