As you know I’m a fan of working on iOS devices (currently these are mainly iPhone 6 Plus and, of course, my iPad Air 2, so when watching Apple’s annual developers conference (WWDC) I was primarily interested in the future of these platforms. After several quarters of stagnating iPad sales, the company was facing an important question: how to breathe new life into the platform?

Note: The following article appeared first in the July’15 issue of iMagazine - the leading lifestyle magazine for Apple enthusiasts in Poland. I’m a regular contributor and write my monthly productivity column there. 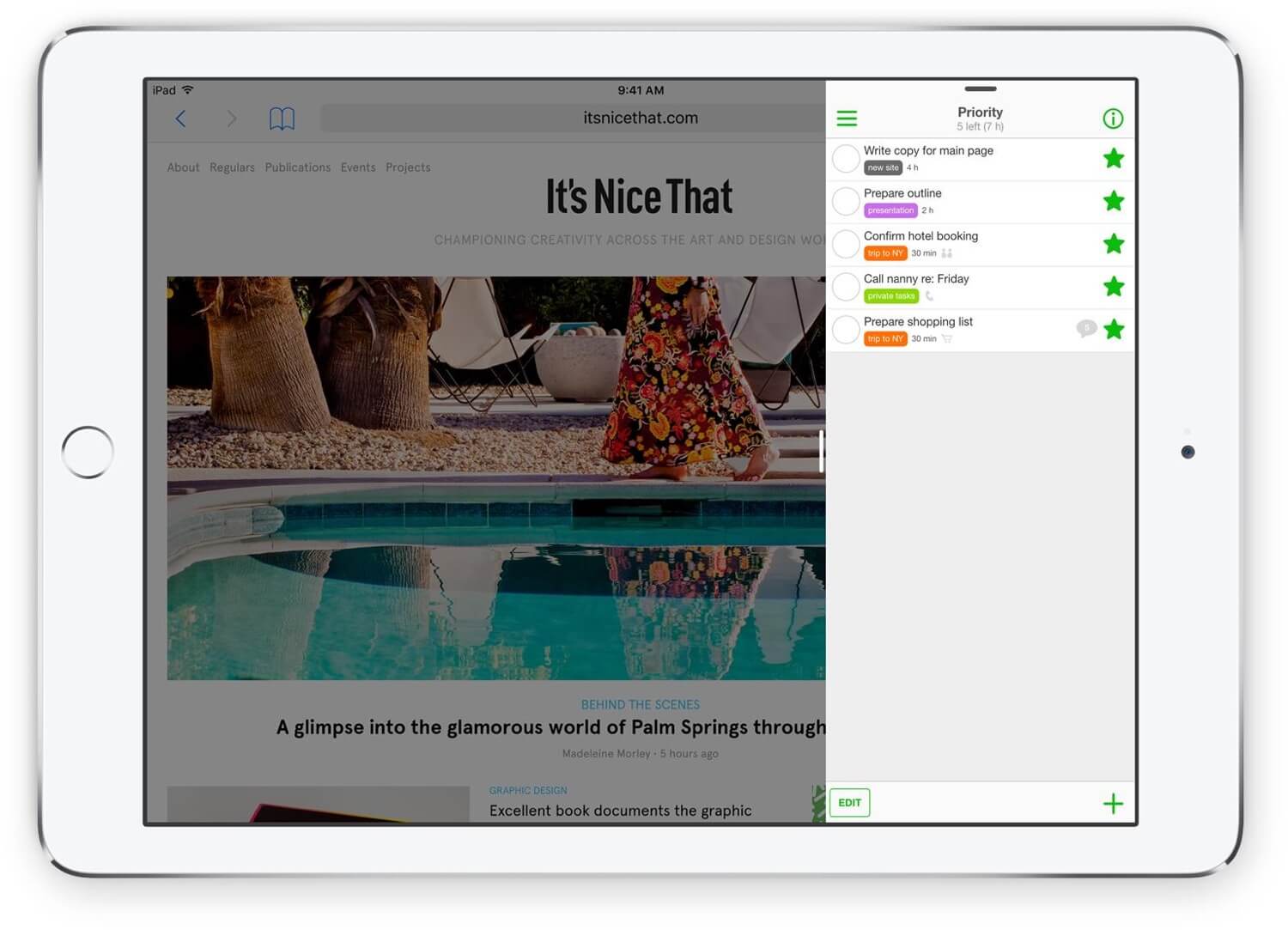 Because iPad is not suitable for real work…

One of the key issues in the debate on working on the iPad is that you can only run one app at a time. On the one hand, it’s a huge plus. Maintaining concentration, which is a challenge for many people in modern times, is very important. Therefore, the ability to focus on one thing at a time without being distracted by other blinking windows is very helpful.

On the other hand, sometimes we do need to have two apps open at the same time!

Exactly, that’s why Apple decided to introduce three new solutions in iOS9. I’m eagerly waiting for them as they’ll let me boost my productivity on the iPad even more:

The first new feature is called “slide over.” It allows you to view an additional app (which takes up about 1/4 of the screen) with one gesture, do something in it, and later close it with an additional gesture. An ideal scenario for this feature is when I’m writing an article on my iPad in Editorial and suddenly I realize that I need to add something to my task list. So, I invoke “slide over” to view my project and time management app (in my case Nozbe :-)) and I add a new task. Then, I get back to writing. This feature makes switching between apps easy and fun, and it allows me to stay focused on my current task.

Finally! Because at Nozbe we write everything in English and later translate it into other languages, I often need to open two text files simultaneously to compare them. Now I’ll be able to do it and open one text in Editorial, and the other in e.g. AI Writer.

Here’s another idea: Safari on one side and Evernote for taking notes on the other. There are many possibilities, and the iPad Air 2 display (split-screen is only available on iPad Air 2) is so big that this feature can be a truly helpful addition!

Another very useful feature for which up till know I’ve been using my iPhone. Sometimes we need to do things which have to be done but don’t require great focus… Now it’s going to be possible.

This feature can be great for learning purposes by allowing, for example, to make notes while watching an interesting video. I recommend my free “10 Steps to Maximum Productivity” course. You can learn something interesting from each lesson, and by using the new “Picture in Picture” feature you can write down ideas that will help you increase productivity. Isn’t that great?

Will iPad start to sell better?

Each of these three new features will have a considerable impact on iPad’s ecosystem. First of all, because they’ll only be available on iPad Air 2, they’ll force people to buy the new model. Split View won’t work on other iPad versions.

iPad’s “problem” is that it’s great and lasts long. My daughters are still using my first generation iPad with iOS5, which is still working very well. I think this is the main reason for which many old iPad users haven’t felt the need to buy a new one. Now this might change.

iPad is becoming a much more powerful tool for work

The second and most important thing is that now the iPad will become a much more “productive” computer in the eyes of many “iPadOnly” skeptics. I hope that many people will convince themselves that they don’t have to take their laptops for shorter trips because the iPad is completely sufficient for that purpose. Personally, for longer journeys, I only take my iPad and iPhone. Until now, I’ve been an exception, but probably not for long.

Question: Are you an iPadOnly skeptic or fan? Will the new features change your attitude?