This article was inspired by questions from readers and my discussion with Radek in the 95th episode of “ThePodcast.fm.” In that episode, we were chatting about our new wireless headphones and discussing how they make us feel like we’re living in the future. On top of that, I also believe wireless headphones significantly improve productivity. So, if you’re still using wired headphones, then, to quote Steve Jobs: “you’re doing it wrong.” Read on to find out why. 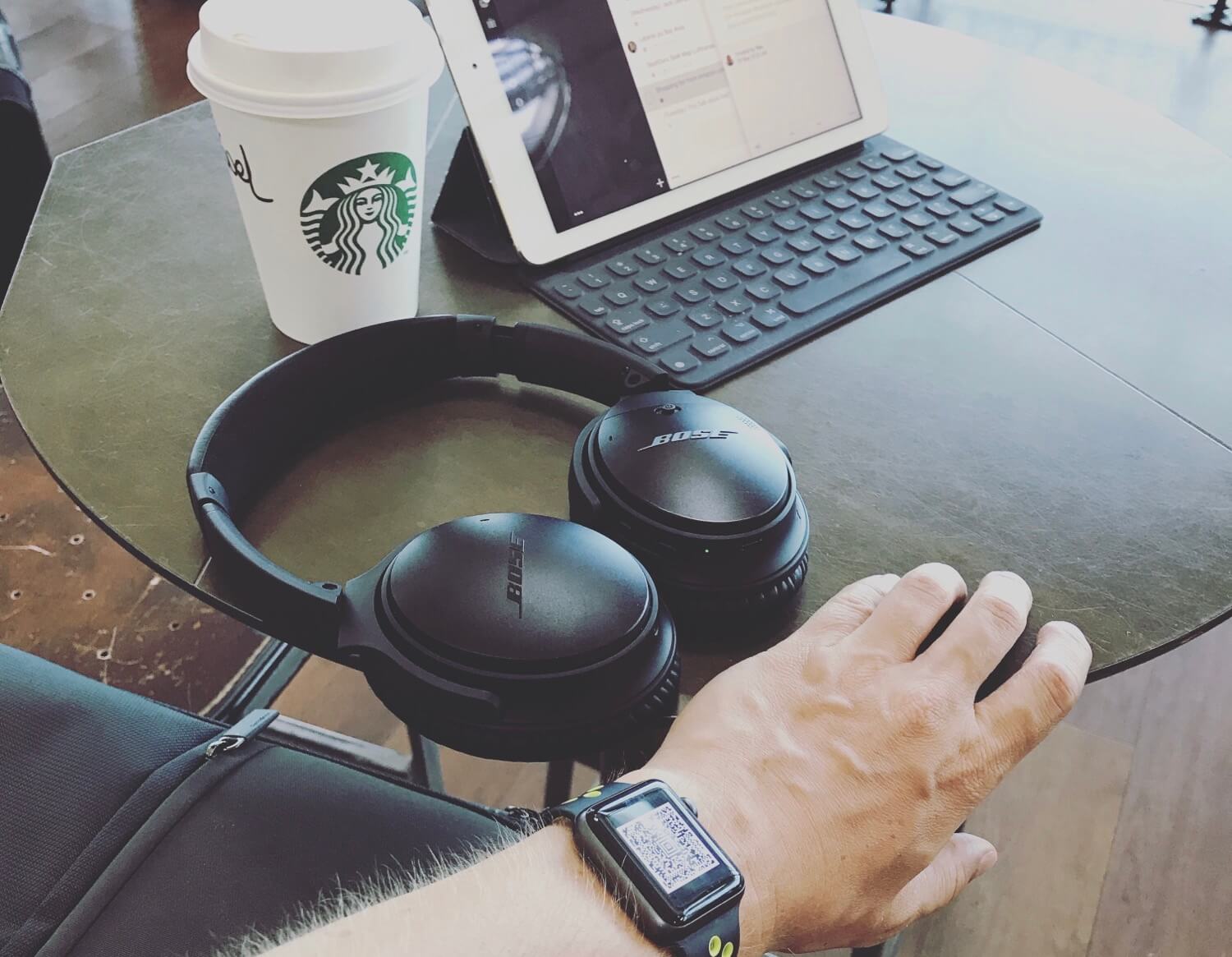 Note: The following article appeared first in the September ‘17 issue of iMagazine - the leading lifestyle magazine for Apple enthusiasts in Poland. I’m a regular contributor and write my monthly productivity column there.

Don’t be afraid of change. It’s an inevitable part of business and life…

We live in a world of technology, which is developing at a tremendous rate. Ten years ago, there weren’t any iPhones, and now the current iPhone 8, as tests show, it’s also faster than this year’s MacBook Pro. The world is changing so quickly that it’s hard to keep up.

Change is also a vital part of my work. When I started Nozbe over 10 years ago, Steve Jobs had just unveiled the iPhone, and I believed I was building a web app for managing projects that would only work in a browser window on the desktop. It’s been only 10 years, but today we have apps for all major platforms, including the Apple Watch. And we’ve just released a version that works with Siri, so now you can add tasks using voice control – without even launching Nozbe. Everything is evolving at a rapid pace, but that’s precisely one of my favorite aspects of the IT industry. Change is inevitable. That’s why we have to constantly observe trends and buy the latest gadgets to understand how they can help our clients. I remember when, in September 2007, I was one of the first iPhone users in Poland. In May 2010, I had to get an iPad, and by May 2015, I needed to get my hands on an Apple Watch.

I’m not writing this to brag, rather to add some context to what I’m about to say about wireless headphones, because I remember when Apple did something, what many people considered “terrible”:

iPhone 7 and Plus dropped the headphone jack (#Courage)

Many people were unhappy with the change, complaining that it was stupid, that Apple was doing it to boost sales of its expensive Beats headphones… and folks were questioning why were they doing this now, etc.

At the time, I was already using wireless Bluetooth headphones with my iPhone 6S Plus, especially for running and cycling, so I found all this whining quite surprising.

To be honest, I was quite happy with the change because I knew that it meant that progress was on its way and that coming soon would be even better headphones – like those with Apple’s W1 chip. And that’s exactly what happened.

That brings us to the main point of this article – a review of three kinds of wireless headphones that I use on a daily basis and that not only work like magic, almost transporting me into the future, but also help boost my productivity.

When, a few years ago, one of my friends showed me the Bose QC20 noise-canceling earphones, I was blown away! Suddenly, I could listen to music, podcasts or audiobooks while sitting in a room full of people or on a loud plane. All of the noise faded into the background like magic, and I didn’t have to increase the volume to hear over anything. The only thing that put me off at the time was the price tag. It reminded me of that scene from “The Wolf of Wall Street” in which one of the characters asks why side dishes are so expensive, to which the other one replies that they “cure cancer”…

Bose’s noise-canceling headphones don’t cure cancer, but they also certainly don’t tire my ears, because I don’t need to increase the decibels to hear the sound. That convinced me to get a pair of Bose QC20 headphones back then, and less than a year ago, I purchased the Bose QC35 model, and I don’t regret the money I’ve spent on them.

If you read my articles, you know that at Nozbe we work with a “No Office” model – i.e., everyone works from home, and we don’t have a central office. Since I’ve purchased these headphones, I tend to get out of my home office more often and work from a coffee shop, a park or a friend’s office. When I’m wearing my Bose QC35 headphones, I maintain the feeling of being amongst people, yet the noise they’re making just fades into the background, allowing me to do my work.

Currently as I’m writing this text, it’s morning, and I’m sitting in a crowded coffee house. I’m surrounded by many people, and yet I’m fully focused on writing this article with the music playing in my ears – at the moment, Ludovico Einaudi’s Royal Albert Hall concert – and I’m simply enjoying my work!

My headphones of choice for traveling

You know me – I use an iPad Pro as my main computer for work. I carry it around in a comfortable backpack, in which I always keep my Bose headphones and basic cable set for charging my equipment (just in case). This way, when leaving the house, I only need to pack my iPad – the headphones are already there.

The noise-canceling function also works well on a flight – fortunately, I don’t fly very often, but in October, I traveled by plane six times, so I used them quite often. The difference they made was amazing! Whenever I took the headphones off, I was surprised by how loud the plane and the people actually were.

The Bose QC35 headphones don’t have Apple’s W1 chip but can be connected to two devices at the same time, so I have them permanently paired with my iPhone and iPad. Again, it works like magic – if I’m listening to music on my iPhone and want to watch a video on YouTube on my iPad, the sound auto-magically switches between the two devices. This in turn means more comfortable work and better productivity… in consuming content. :-)

The battery life is good as well. It’s classified by Bose at 20 hours – I haven’t checked it myself, but I believe it’s correct… I charge them once every few weeks, depending on how frequently I use them.

Now, let’s move to less expensive headphones – Apple AirPods. When I ordered mine, I had to wait six weeks for them to arrive. But it was definitely worth it! Why? Because they’re always with me!

Always in my pocket. Always!

When I’m switching pants or getting dressed in the morning, I always make sure I put my AirPods in one pocket and the iPhone in the other one. I don’t go anywhere without this set (unlike the large Bose headphones, which I keep in a bag and use when going out with my iPad). I always take the AirPods with me, because they’re so small you can barely notice them.

When I’m taking a walk or waiting for someone, I quickly take them out of my pocket, put them in my ears and listen to audiobooks, podcasts, etc. Since buying them, I find more time during the day to listen to audio content. So, I learn new things and explore new topics, which means I’m more productive. :-)

One cool feature of the AirPods is that their case is not only super-practical and is the size of a dental floss spool, but it also serves as a power bank, charging my headphones whenever I’m not using them! So, every time I put them on, they are 100% charged!

Every once in a while, when I’m at my home office, I take the case out of my pocket, and plug it to the nearest Lightning cable. This way, I ensure that they’re always charged and have an endless battery life.

The W1 chip – the magic of pairing with… anything!

AirPods have Apple’s famous W1 chip, so they work with all of my devices: iPhone, iPad, iMac. So, whenever I want to listen to something with headphones, I simply pair my AirPods with the device with one click or tap.

Another bonus is that, while the cable “EarPods” used to fall out of my ears, the new AirPods were designed for the perfect fit. However, I don’t fully trust them while I’m running, fearing they might fall out. I have a different pair of headphones for running:

Mpow Enchanter – because sport is healthy! And productive!

I bought these wireless headphones for less than 20 EUR on Amazon. That’s 1/15 of the price of Bose and 1/8 of the price of AirPods. They’re excellent for exercising because the ear hooks ensure a perfect fit. They hold the earbuds so firmly that you have to literally pull them out of your ears – there’s no chance they’ll fall out. For this reason, they are my favorite sports headphones for running and cycling.

Previously, I tested some of the leading brand headphones, such as Jabra and Jbird, but they were much more expensive and yet far worse! Mpow Enchanter headphones are well-made and almost indestructible. Even if I were somehow to destroy them, the price is so affordable that it wouldn’t be a severe loss.

Exercising and listening – two in one

Thanks to Mpow, I wear headphones while running or cycling. While jogging, I usually listen to audiobooks. The sound of the wind doesn’t bother me that much, so I can focus on the content. On the other hand, during cycling, I tend to listen to podcasts – even if the blowing wind prevents me from understanding everything, I’m sure I’ll still learn something interesting.

Listening to podcasts or audiobooks while exercising really allows me to “bend time,” enabling me to do something good for the body and mind simultaneously! I often think to myself: I’m not going out for a run, but to “read” a book while running.

Freedom from wires and better productivity! It’s good to live in the future!

The future will be wire-free. Even the newest iPhones already have inductive charging. The Bluetooth standard is also improving (right now it’s 4.0 or maybe even 5.0), so you really don’t need to cling to wires!

It’s great to live in the future, in which you don’t necessarily have to buy expensive headphones like [Bose QC35][qc] or AirPods to discover the freedom of wireless headphone technology – you can start with cheap (but good) Bluetooth headphones. Yes, they require charging, but, even right now, almost every pair of headphones has at least five hours of non-stop play, and some have even longer. We have to charge our iPhones and Apple Watches anyway, so this isn’t anything new. The convenience of life without wires cannot be overestimated.

Using wireless headphones can increase your productivity! And will feel like living in the future!

If you have a minute, tweet me at @MSliwinski and tell me which headphones you use and what kind of books or podcasts you listen to – I’d love to hear your recommendations. I also encourage you to listen to ThePodcast.fm (recently, we were featured on the first page of Apple Podcasts), in which we chat about technology, books and everything else.