In the Mac and iPhone community recently there was much a debate whether we (iPhone users) are delusional liars and paranoids - according to a report by a consulting firm from Denmark. Well, let me address these allegations and admit… that I might be a little paranoid… and I’m pretty happy with that: 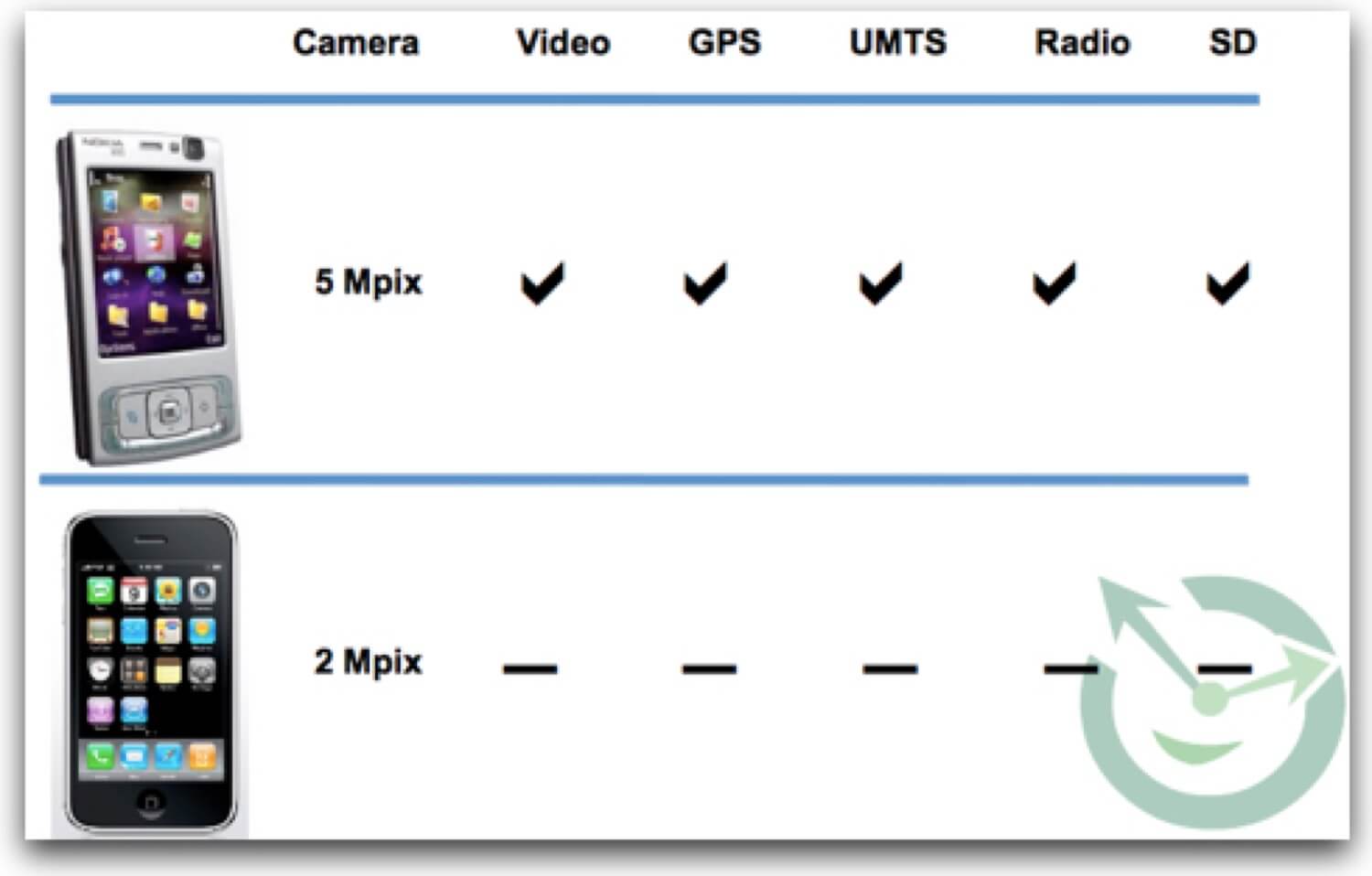 iPhone lacks features and iPhone users are defending it

It’s a fact that iPhone lacked lots of features when it launched (just look at the chart above to compare first iPhone 2G with Nokia N95 at the time of iPhone launched) - let me address the most important issues with the first iPhone and why I think these were really wins by Apple:

No 3G - big deal. But Internet is REALLY built in.

Other phones had 3G, so what? You still couldn’t use the Internet in a convenient way. These had some strange WAP or other crappy browser. With iPhone you could really touch the Internet - browse web sites and use it perfectly. What’s more lots of web-apps (with Javascript and AJAX, including iNozbe) popped up so you could use the Internet in a totally different way. Fantastic.

Apple cannot multitask, can you?

The idea of iPhone not multitasking (although you can call people and run apps in the meantime) is a really good decision - you open app, you close it, you know where you are, you don’t have to open “Task manager” to kill some apps that drain your battery (Windows, anyone?) Face it - to be productive we really cannot multitask anyway, right?

Apple controls the Appstore… really? Did we have Appstore before?

iPhone introduced the Appstore - first time in history my mum has a an iPhone (smartphone) and she installs apps by herself. I mean really - this is breakthrough - my mum is installing apps on the phone! Before the iPhone there were some Java apps you could install on some phones if you were a geek. Apple made it so simple and we blamed them for it.

No physical keyboard - but a virtual one that works like a bliss instead.

Especially when iPhone 3.0 software update introduced the horizontal keyboard across almost all the apps now, writing emails and SMS messages is really fun and fast! Why would I want a physical keyboard that can break down, with really tiny buttons? The virtual keyboard is a lot bigger and better.

Changing the industry with User experience not features.

To all the startup owners, founders, entrepreneurs - just look at the iPhone’s success - it’s not about the features, Nokie with more features lost it. It’s about the User Experience. Apple decided to reinvent the user experience of the mobile phone. They made us love our phones again and made people use a lot more of their phones capabilities (did I mention my mum uses iPhone to check Email?)

Do you like your current mobile phone? Are you iPhone paranoid? Which features you’d like iPhone to have?