Yesterday I finished my first ever triathlon. I’m so, so happy. Especially that I was very close not to finishing it. Twice. Yes, my first triathlon is a story of excitement… followed by self-doubt and later drama that for a few minutes put me out of the race… and joy of fighting the odds and finishing it in the end. Here goes: 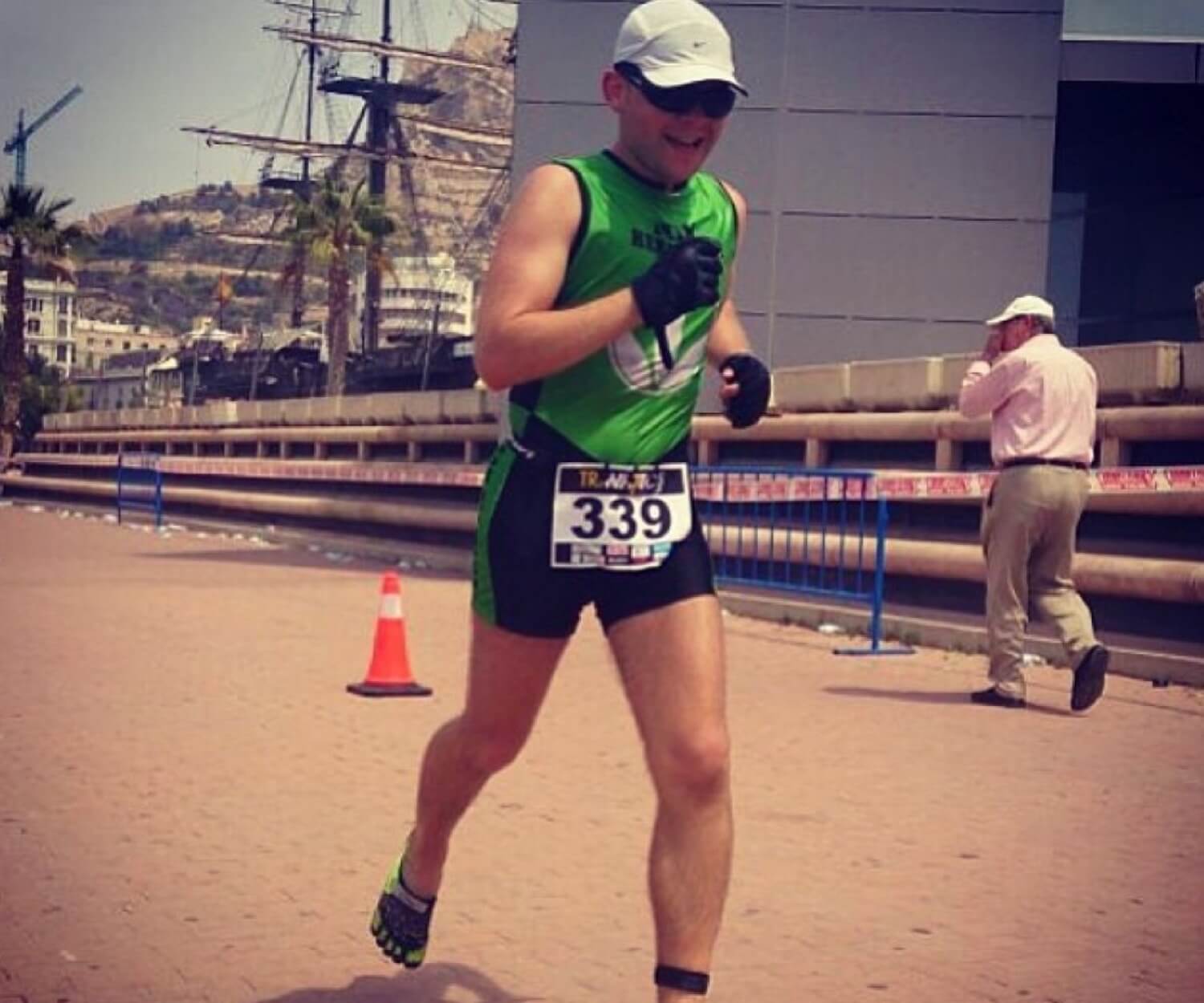 I started strong with lots of regular running and a thanks to a new style of eating /I managed to lose 15+lbs. Suffice to say, I’m in the best shape of my life. That’s why when my daughter’s teacher asked me if I wanted to run a triathlon with him I decided to give it a try. He told me about the “sprint” distance (750m sea swim, 20km bike ride and 5km run) and I thought it was tough enough to get me out of my comfort zone and reasonable enough that I had a fighting chance of finishing it. And it was only a little more than a week away, so I knew I didn’t have lots of time to prepare. I was excited to give my first triathlon a try. Well, it wasn’t that easy…

I asked one of my triathlon-running friends about my swimming and I confessed my “crawl” technique was really poor and I preferred breast-stroke (which we call “frog” in Poland). He said I should use the technique I felt most comfortable with. I did a trial swim last Friday and felt comfortable and strong going with breast-stroke. I knew I’d be slow, but the aim of this first event was to just complete it.

I have a “daddy’s bike” (a kinda-mountain bike for the city with a baby seat) so I had to borrow a street bike (racing bike) from a friend. Wow, it’s a totally different world. I took it for a spin on Wednesday and later on Friday and had to learn how to manage it. How and when to change gears, how the bike behaves, the speeds it achieves… everything.

On Friday I did my first brick-training, meaning I swam 15 minutes in the sea and later quickly jumped on the bike and went riding for 22 km… and I felt pretty confident about myself.

I’ve been running 10km twice a week for quite a while now and on Thursday asked my running buddy to push me a little more and we ran fast 5km first (at 4:40min/km) and slower 5km later (5:10min/km) so I could find my race pace. It was great and I beat my record and ran 10km in just below 50 minutes for the first time in my life.

I thought I was ready to do my first triathlon… prepared my gear on Saturday night, compiled a checklist of things I’d need to take care of before the race on Sunday morning and calmly showed up on the track. Everything got real now… and my race drama began:

Part 1 - swimming - I wanted to give up after 3 minutes

We jumped in the sea. Water was pretty warm. I felt good. Then the whistle. We’re off. I started with my regular breast-stroke movements and soon after 3 minutes I realized I was last. And by a large margin. There was a group of swimmers, 10-20 meters of sea… and then me. I wanted to give up. I thought they’d all soon disappear and they’ll just leave me there. “Yep”, I thought, “I should give up now.”

But then after the first turn I realized I started closing in on some of the crawl swimmers. Actually I overtook someone, and then another one… I kept my constant speed and they were slowing down. I kept on keeping on. At the end of this 750 meter stint I had to watch out in order not to hit someone… I left the water as one of the last… but there were around 20 people behind me. Wow, I wasn’t that bad after all. Good that I haven’t given up just yet.

I ran through the transition post to my bike, put on my 5fingers shoes, put on my helmet and the rest of the gear, took the bike, ran with it until the start line and started biking… and I realized that for some reason my speedometer wasn’t working. Well, it’s a pity, but it’s not that important, I continued pushing. I caught a very nice pace and found a few other fellow cyclists with comparable speeds and after the first lap (there were 3 in total) I felt comfortable in our small group and confident I’d make up the lost time in the sea with my bike ride.

… and then my chain broke!

Seriously? Really? How many times in your life have you had a bike chain break on you? Ever? Well, I never… until now. In the middle of my second lap going uphill I decided to switch to a lower gear and the bike I was riding made a few strange sounds and I lost my chain! I thought it just went loose… but no. It broke in half. Game over. I had to retire. My first triathlon was not meant to be. I started crying. I felt helpless. There was nothing that could be done, right? That’s it for me…

As I stood there, I picked up the chain, took the bike and started walking back down the hill. And then I saw two girls (volunteers from the race committee) with two mountain bikes cheering on other racers. Without thinking too much about it, I walked to them and heard myself asking this: “Girls, will one of you borrow me your bike? Mine just broke and I want to continue the race.” Before I realized what I just asked, one of them, Maria, said: “No problem, take my bike”. Well, I gave her my bike, took hers, adjusted the seat and took off again! My goal was to finish the race, finish my first triathlon, even if I had to be last and they’d have to wait for me at the finish line.

Maria was like an angel to me as she gave me her bike, I give her all the credit… but a regular city-kinda-mountain-bike doesn’t really compare to a street bike. I was really, painfully slow, (what a difference a bike makes!)… but still, a slow bike was a lot better than a fastest bike with a broken chain, so I pushed on. I finished my second lap with everyone overtaking me but I kept going and as I climbed the hill well into my third lap I felt relieved. Firstly, I knew it’d be all downhill from here, and secondly, even with all this happening to me, I wasn’t last! There were 3 or 4 bike riders behind me! Wow.

I left Maria’s bike at the Transition Point, took down my helmet, put on a cap, forgot to take off my gloves and started running. I felt tired after riding the mountain bike but I didn’t feel destroyed. I needed water. As I left my broken bike, I left it with my water and now I was dehydrated. Luckily after the first kilometer there was a water point. I had a few large sips, poured the rest over my head and started picking up the pace. Life was good again. I realized other people were really tired at this point. Some were even walking. I kept running, managed to overtake a few runners and started enjoying myself. At the end of my second lap I felt some of my muscles getting stiff due to the bike ride so I decided not to accelerate anymore but just keep a steady pace.

And there I was. Despite of all the problems and issues… I saw the finish line. I pushed on and felt happy. And strong. And brave. And happy again. I did it. I finished my first ever triathlon.

I was 40 minutes slower than the winner, but I was happy and felt like a winner anyway. I was 210th in swimming, 222nd in biking (guess why) and 166th in running (5:06min/km - not bad!). And against all odds, I completed my first triathlon. So happy!

Side note: I checked the results of one of the bikers who was riding steadily with me until my chain incident. She finished 166th. 12 minutes ahead of me. I can assume this is how much time I lost.

Second side note: I need to learn how to swim faster using crawl technique and I need to practice biking… and I should be able to improve my performance significantly. Yes, it’s time to improve these disciplines.

I would like to thank Mr Moon, my daughter’s teacher for convincing me to do it and supporting me all the way. Also my personal friends and trainers, my running-buddy Lluis and my fitness buddy Luis, as they are to blame for my best shape ever. Also Maria for lending her bike to a total stranger and helping him make his dreams come true (yes, I managed to find her after the race and give her the bike back). Also Roger, my friend who borrowed me his street bike (no, he couldn’t have predicted the chain would break). And my family, my wife and my daughters for being on the track and cheering on me. And my younger daughter’s nanny and her daughter for support and for taking the picture you see embedded with this post. And to all of my Nozbe team, real-life and online friends for your advice, kind word and support. Thanks everyone!

Bottom line: Never give up, just do it.

The Resistance will tell you to give up. Voices in your head will try to convince you to drop it. To stop. Never. Keep on keeping on. Just do it. You know you can.

Question: Have you ever done a triathlon? Did you also want to give up but pushed anyway? Where did you get your motivation from?