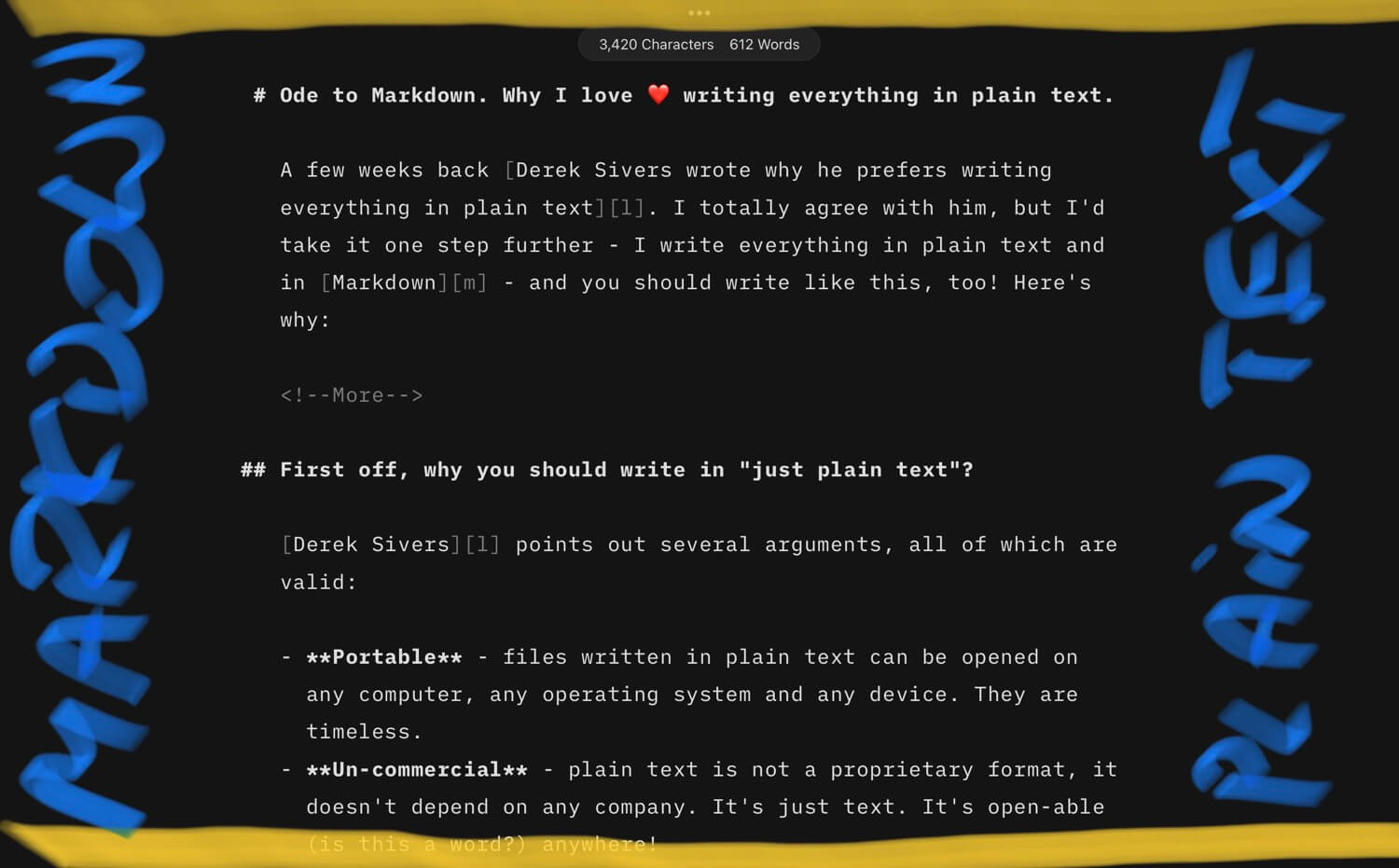 First off, why you should write in “just plain text”?

Derek Sivers points out several arguments, all of which are valid:

Second, why you should write in plain text and in Mardkdown?

I love Markdown. It’s a kind of formatting that makes the plain text file look better and understandable to converters or exporters. Here’s an example paragraph:

This paragraph reads well. You instinctively see which text is highlighted and where is a link to a web site. It’s because:

The overriding design goal for Markdown’s formatting syntax is to make it as readable as possible. The idea is that a Markdown-formatted document should be publishable as-is, as plain text, without looking like it’s been marked up with tags or formatting instructions. - John Gruber

Now if we export the above paragraph to HTML, here’s what you’ll see:

I’m the founder of Nozbe which you can find here - it’s free!

See? The Markdown syntax both reads well as plain text and easily exports to any advanced format.

I wrote my No Office book all in Markdown!

As you can see, the entire chapter is written in Markdown, with some additional parameters (front matter) at the top and it beautifully exports to HTML. And to edit it, I just edit the Markdown version and once I send it to the server, it’ll automatically update the HTML version!

And in the future I’ll add a way to automatically generate the PDF and ePub/Mobi version of the book directly from Markdown!

In fact, the very same way I’m writing all the blog posts for this blog - all in Markdown!

Where else you can find Markdown?

In both Nozbe Personal and new Nozbe - in the comments to tasks - we use a simplified version of Markdown.

In Siri Shortcuts there are shortcuts to convert Markdown to rich format. There’s even an action to convert HTML back to Markdown!

On Github they use Markdown and in many other places!

Most text editors for MacOS or iOS (just like the iA Writer which I’m using to write this blog post) support Markdown highlighting as you can see on my screenshot!

Thanks John (and Aaron Swartz) for coming up with Markdown. I can’t believe it was conceived back in 2004 and it sure took the time to become mainstream among geeks like me. However now I cannot imagine writing blog posts and books in any other format. This is the way I want to keep writing my stuff and I encourage you to do the same!