10 years ago today the big earthquake hit Japan and I was there to witness it first hand. It was my first ever trip to Japan to promote Nozbe and the Nozbe Handbook. What was supposed to be an exciting trip to Japan turned out a lot more exciting due to the earthquake and its aftermath. Today, a decade later, I want to get back to these moments: 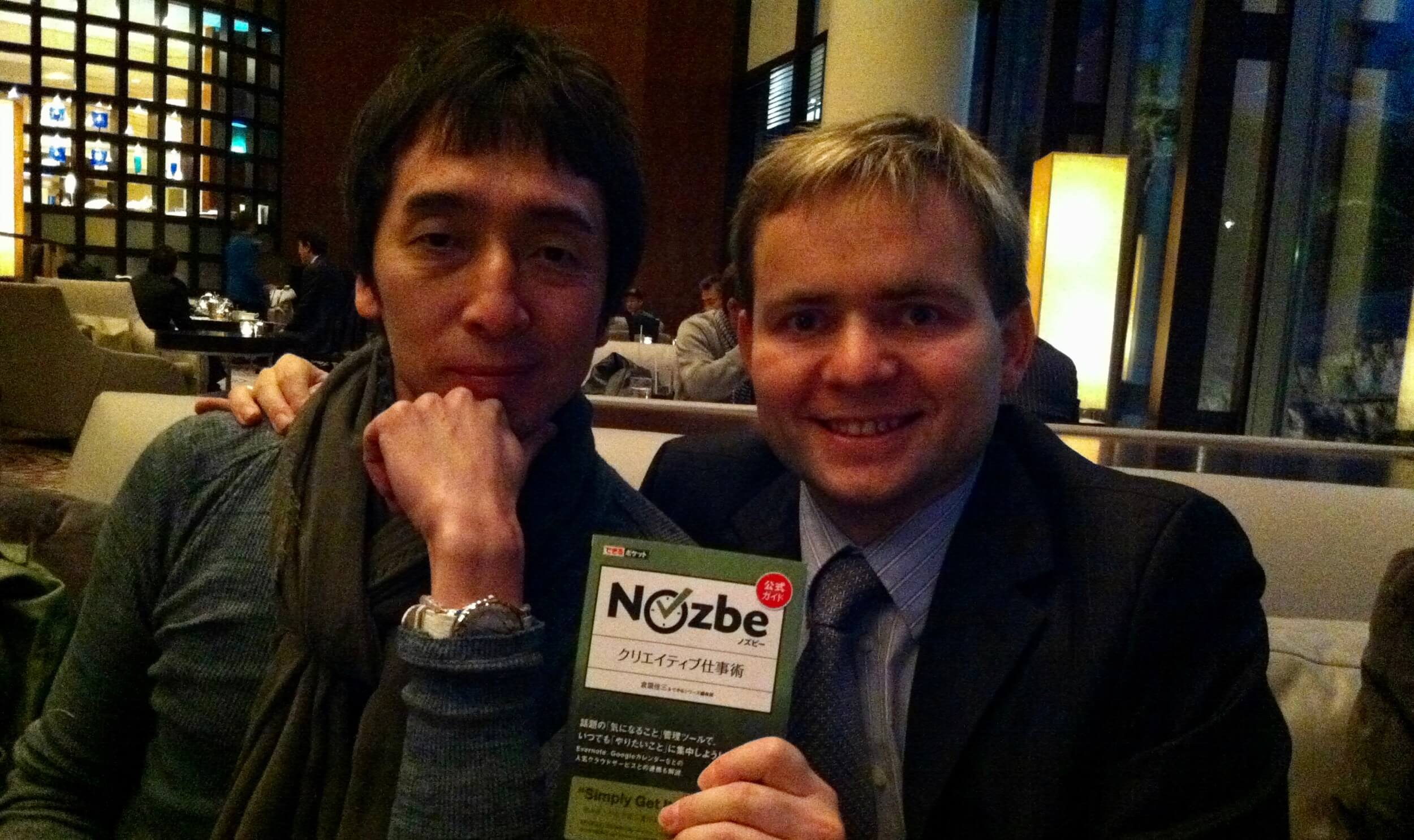 How my Japanese Nozbe trip came to be

In the summer of 2010, right after the iPad launched, together with a company called Macoscope we shipped a Nozbe app for the iPhone and iPad. Our Nozbe Personal was already a recognized web app that also worked seamlessly with Evernote which was then very popular in Japan.

This all resulted in a blogger Kurazono “Zono” Keizo discovering our app. He then wrote about Nozbe in the first chapter of his book On working creatively on the iPhone and iPad. This made Nozbe big in Japan, even though we had no Japanese version of our product.

Stunned by our popularity in Japan, I contacted Zono and thanked him for recommending Nozbe. We became friends and he came up with an idea of writing a Nozbe handbook in Japanese. It was supposed to be launched officially in March 2011.

I hired a PR agency, got a Pimsleur Japanese course to learn some basic Japanese and decided to go to Japan for the first time in my life to help him out with book promotion. 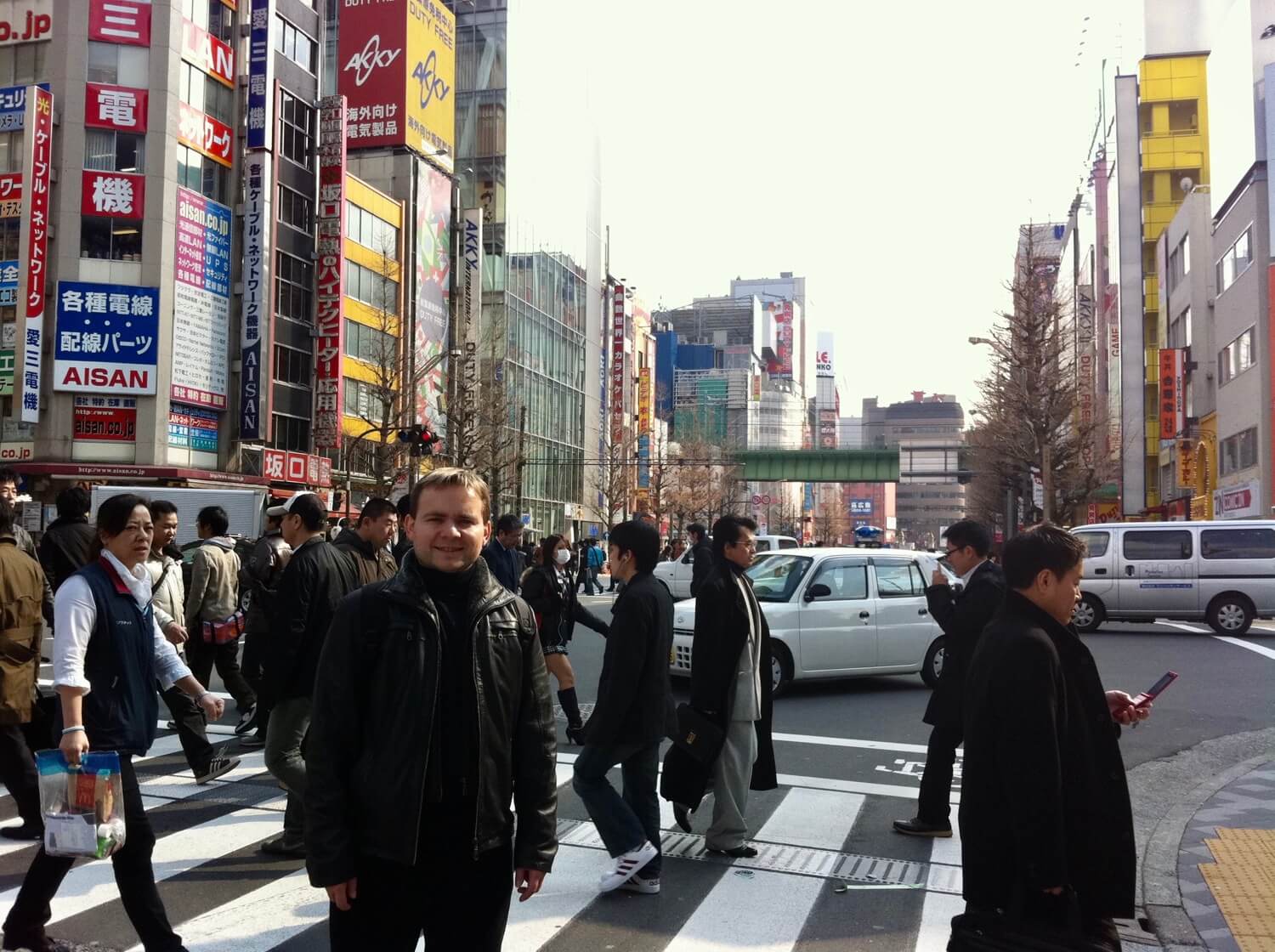 I arrived completely jet-lagged. I was tired by excited! I met Kiran from our PR agency and had my first day of sight-seeing.

Nozbe promotional activity starts. I got interviewed at Mac Fan Magazine and later finally met my partner-in-crime, Zono! We’ve become friends online and finally could see each other for the first time in person! 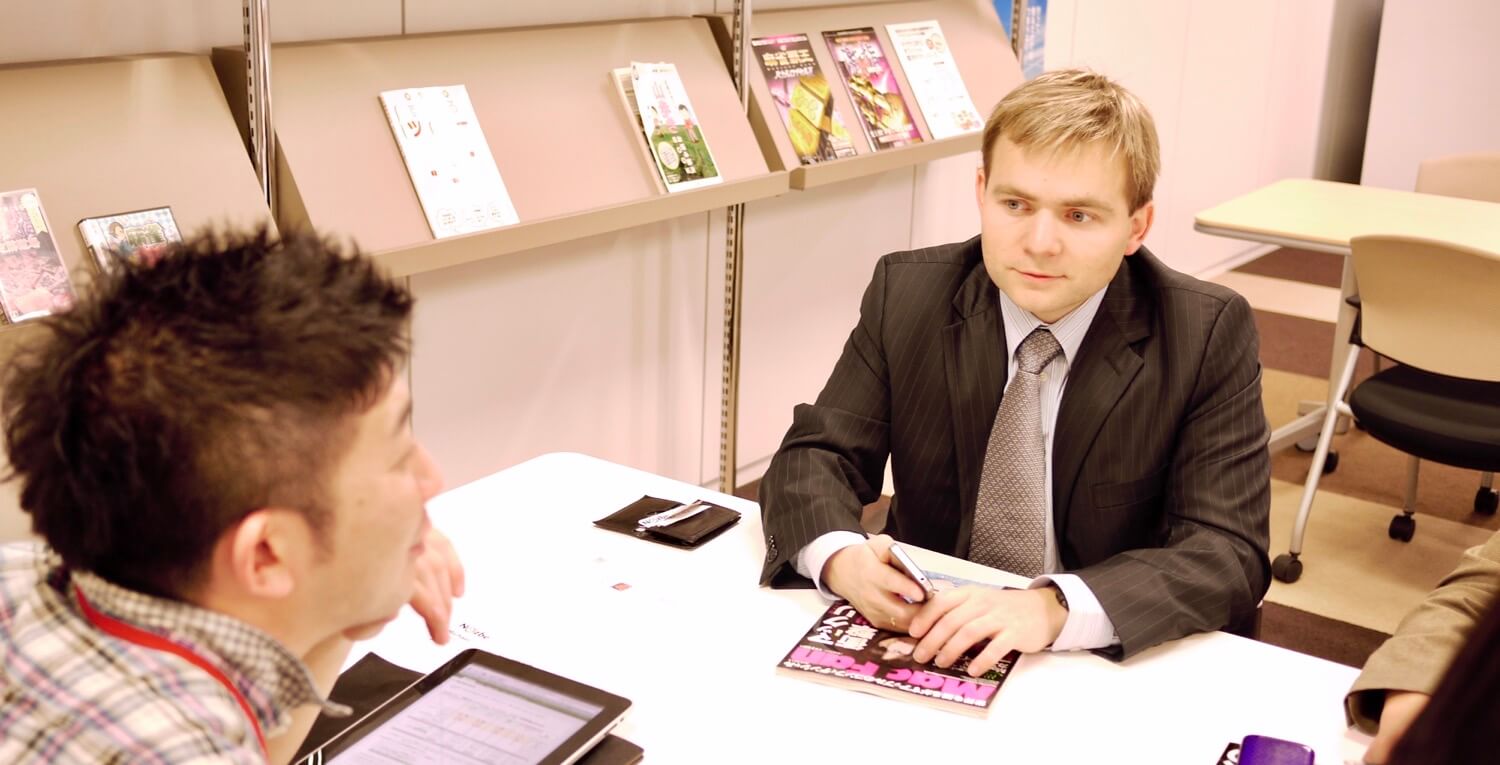 We went around bookstores in Tokyo to see “our” book in the book stores. After all, he was the author but my face as the CEO of Nozbe was on the cover! 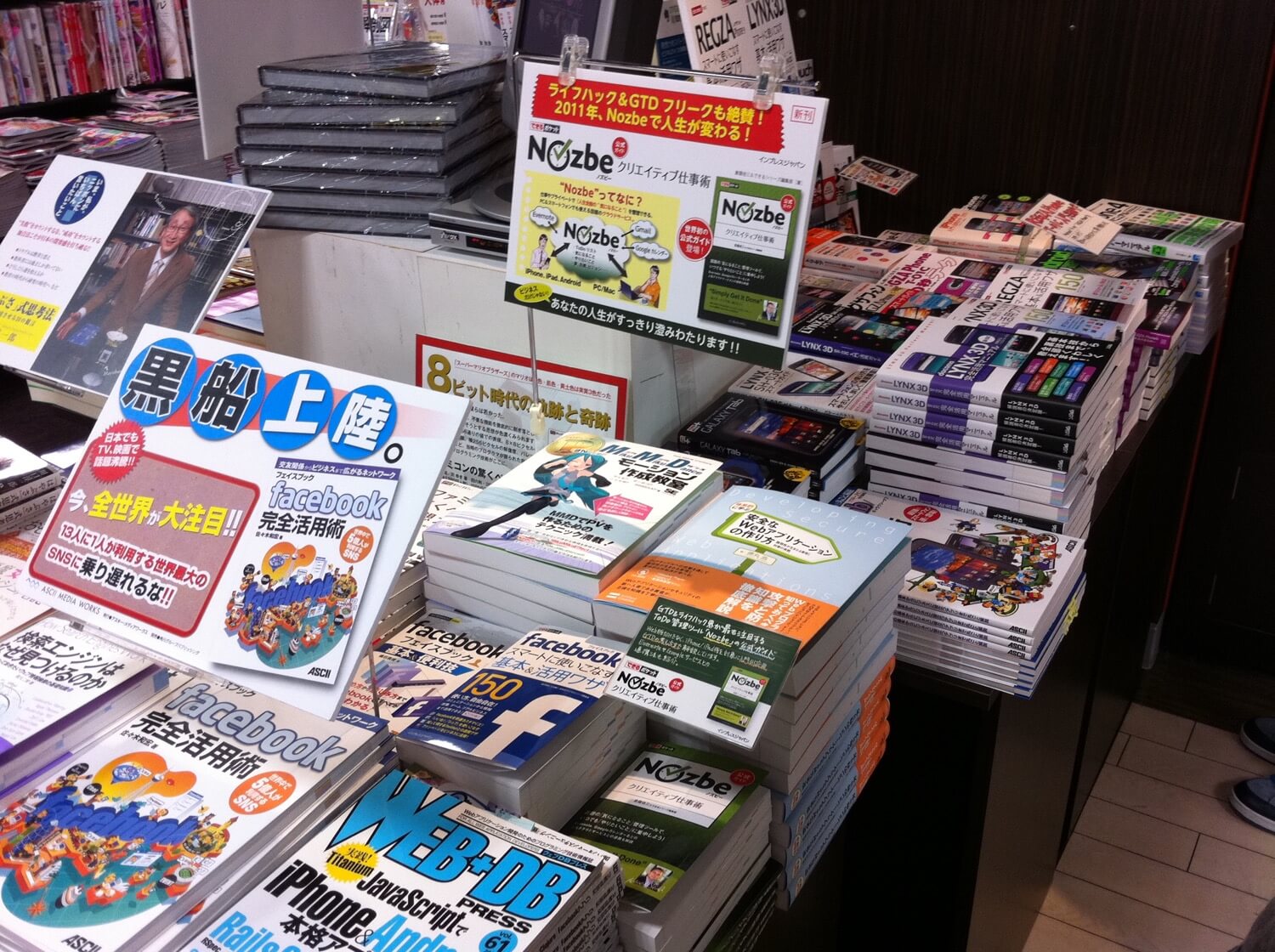 I woke up in my hotel room in Akihabara on the 18th floor of the Remm Hotel. I wasn’t hungry so I started working, writing emails and preparing for that night’s press conference. At around noon I felt dizzy. I thought it was because I didn’t get any breakfast.

But then I looked around. My entire hotel room got dizzy! The blinds were shaking. The floor was shaking…

I was only in my boxer shorts and didn’t know what to do. I quickly dressed up and after a few minutes the shaking stopped.

I went down to the reception and asked about the event, but they said it was normal. So I didn’t think too much about it anymore and got ready for my big day. 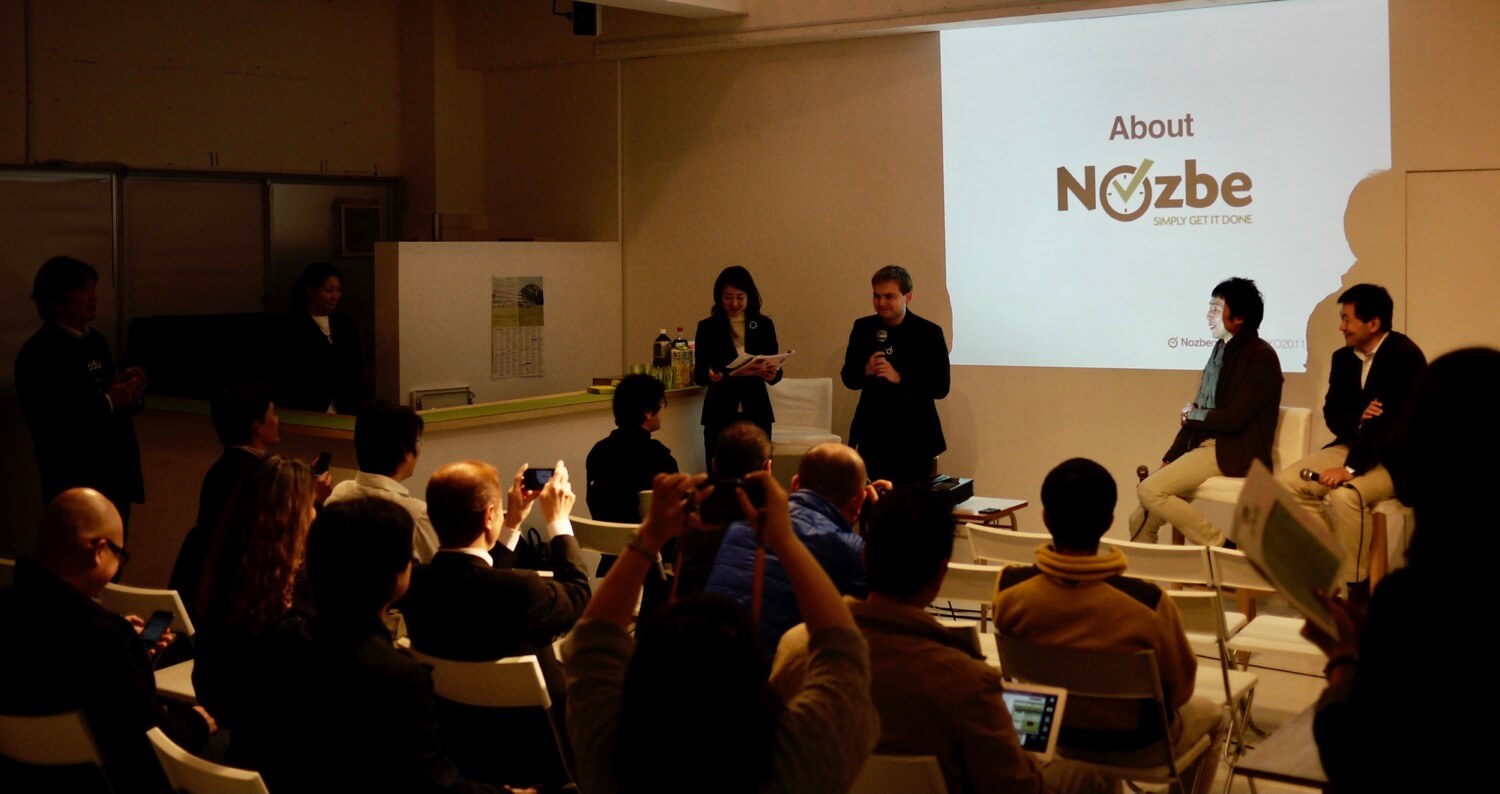 I really enjoyed the press conference. It was great to meet all the major press tech people in Tokyo. And having Zono and Etsuo Ohashi talk about my product was really fantastic.

At night, at about 2 am I felt another shock. I was about to fall asleep after all the excitement of the press conference but then my bed started shaking. I took my laptop and quickly searched for an earthquake status and found out that both of the shocks I felt had epicenters in the ocean, on the height of the city of Sendai. At 6 am there was another shock which woke me up.

I wasn’t scared anymore. I was just annoyed.

In the morning I packed my things and met with Kiran and Zono to go together to Osaka, which was our next step in Nozbe Japan Promo Tour. We boarded the bullet-train Shinkansen and I was so happy to be moving at a speed of more than 250 km/h!

We passed the famous Mount Fuji:

And soon after the train suddenly stopped.

They announced that there was a major earthquake and that the train had to stop for security reasons. I thought: “Big deal! They have earthquakes all the time!” Little did I know. My friends told me to write an email to my wife to say that I was OK, but I resisted. It was just an earthquake, right? After a while I wrote the email and sent it.

Half an hour later the train started moving and we got to Osaka. We still didn’t realize what had happened.

Lucky me, because Osaka is south of Tokyo, so I was moving away from the earthquake epicenter. If we had organized an event in Sendai (which we were considering) I’d be screwed.

Just before the planned event my wife called and was asking about my situation. I realized she must have gotten my email so I told her I was fine and ended the conversation to continue with the event. 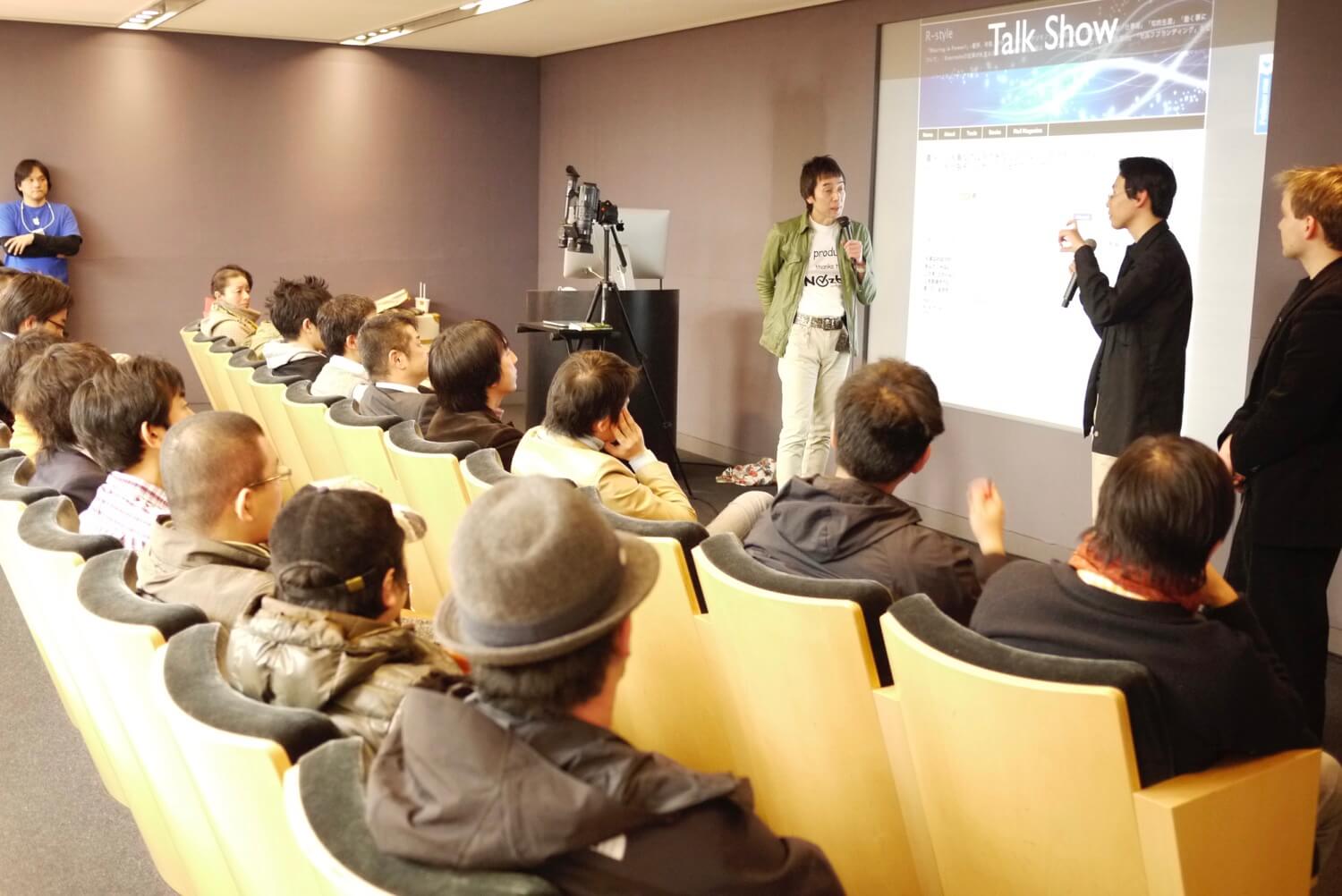 Our event that evening went without issues. We even went for a celebratory dinner afterwards. Only after we got back to our hotel rooms we realized what had happened.

Only then we saw how much Japan was impacted by the earthquake and by the tsunami.

We hardly slept that night. In the morning me, Zono and Kiran were brainstorming what to do. Should we go to Fukuoka as planned or should we get back to Tokyo? How to promote Nozbe when Japan is thinking about something completely different?

My mum (concerned about me) sent me a list of things to do when there is an earthquake. This prompted an idea and I sketched the first version of something I’d call a public project feature – a free, sharable project.

On the flight to Fukuoka I brainstormed this idea with Zono. He loved it and we decided that instead of doing a Nozbe Promo event in Fukuoka, we’d just consult with the audience and talk to them about this feature that we could build for Nozbe: a way to share projects publicly to provide up-to-date information to people in Japan. 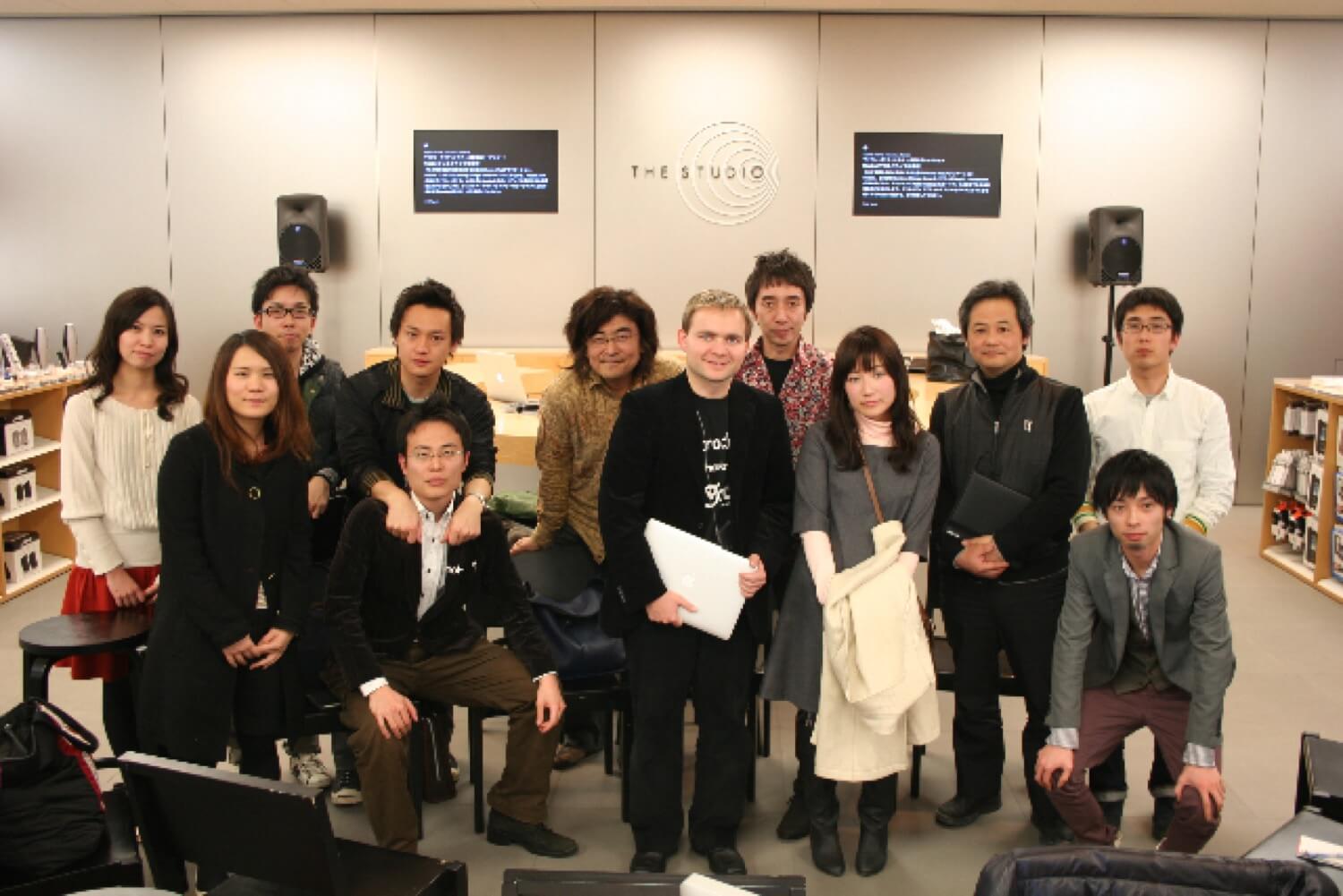 What followed was a dinner, another brianstorming session and coding. Lots of coding… and done by yours truly! Already before the event I asked my CTO Tomasz for preparing the ground-work for me (on a Saturday morning European time!). After discussing the feature with Japanese social-media experts I came back to the hotel at around 11 pm Japanese time with a big Starbucks Latte and started coding based on the groundwork my CTO left for me.

At 3 am Zono came to my room and he explained how the Japanese social media experts had already started work on Facebook. He posted about the idea on his blog, too. And he brought me some warm Japanese tea.

At 4 am I had the first version of the page working, a little later I went to bed and woke up at 8 am, had a shower and finished up the page with Javascript effects and other design tweaks. Later on my plane to Tokyo I revised everything. When we landed in Tokyo, we grabbed a quick lunch at the airport and I was still working on the feature: 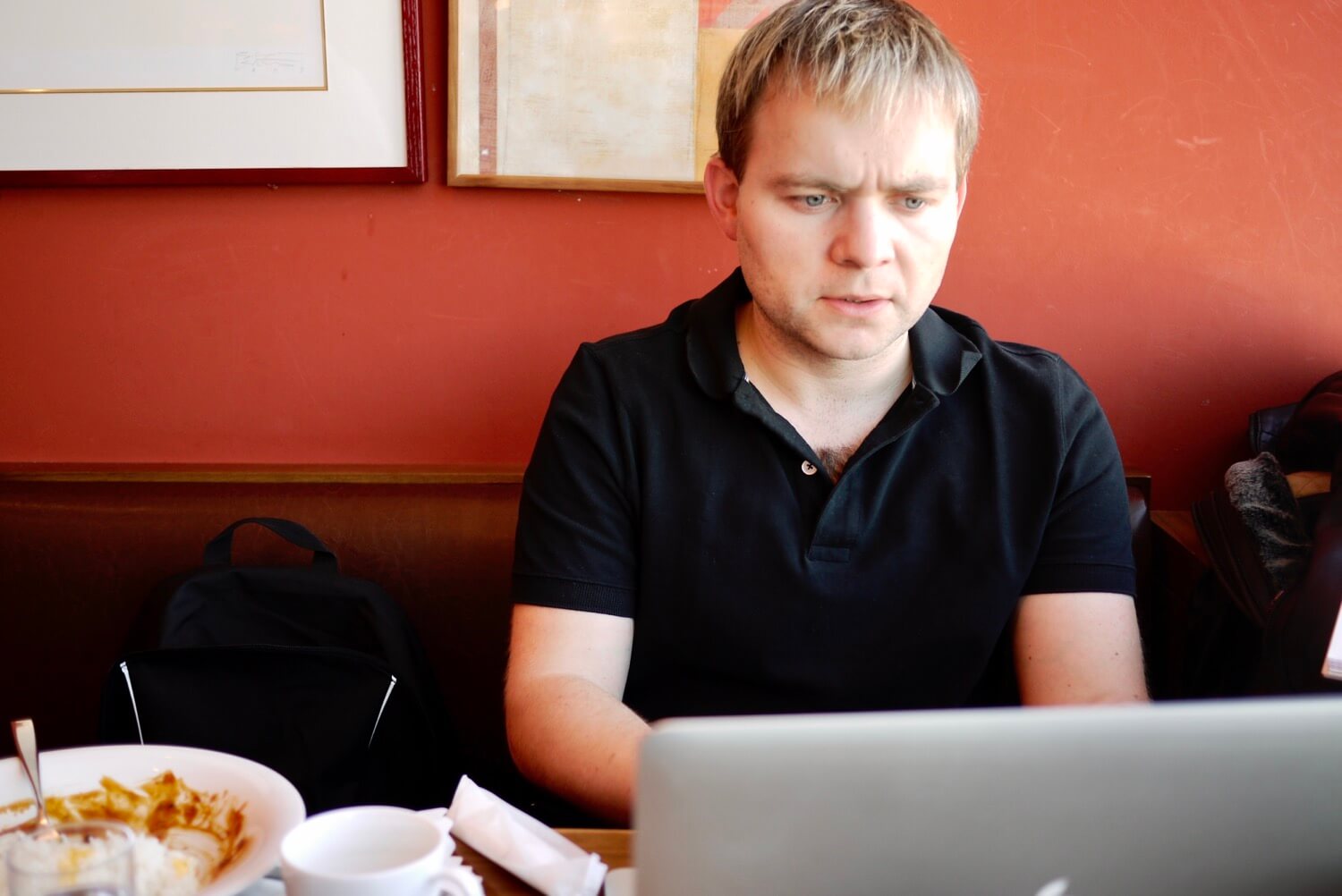 Officially the #PublicNozbe feature went live at 4 pm Japanese time on Sunday, March 13 2011, just after 24 hours of the initial idea. Here’s how it looked like on the web and on the mobile phones: 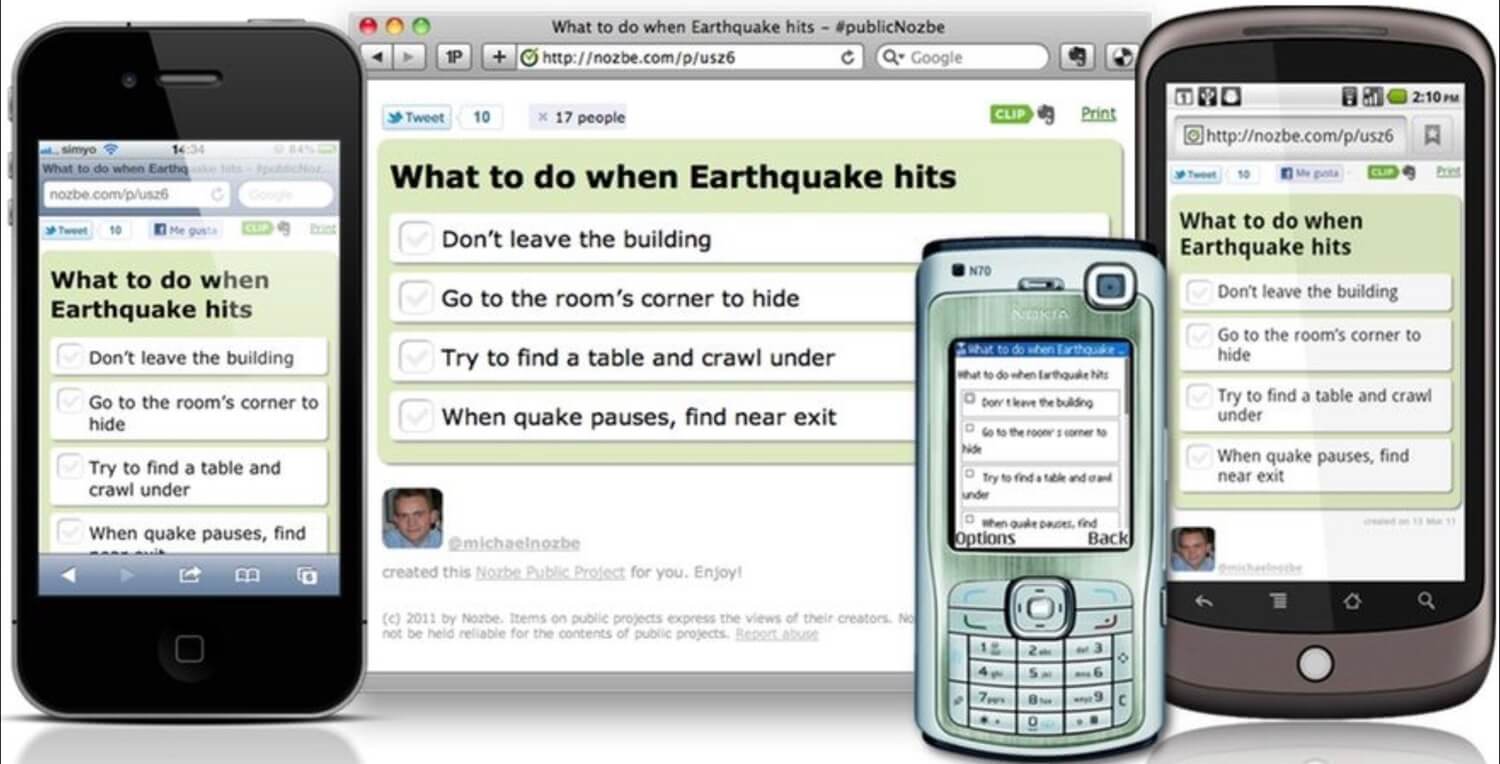 Aftermath of the #PublicNozbe initiative

Read more about the results of the #PublicNozbe projects here. Suffice to say these projects were a hit. Many Japanese people approached me and expressed their gratitude for working so hard on making this feature available so quickly to them. Apparently there was a need for it. In the first few hours more than 100 public projects were created and almost 2000 people were viewing them. Incredible.

I haven’t slept much in the next days and my hotel room was shaking on hourly basis (the after-shocks kicked in very often in Tokyo) but I felt great and empowered to have helped.

I never thought Nozbe would be so social and so collaborative. These #publicNozbe projects are not exclusive to Japanese users – later many people from different parts of the world created their own public lists.

It was a great collaborative work in tough times. One of these moments that you feel you’re alive and work on something that changes the world.

Please note that the #PublicNozbe projects no longer work, they were supported for many years but later we took them down and replaced with Nozbe.how

Life in Tokyo got weird. There were electricity shortages. People weren’t going to work much. Due to after-shocks it felt like the earth was shaking constantly.

I remember doing an interview for the DIME magazine, where in the middle of it an earthquake happened. We just paused the interview. Waited a few minutes. And then when it stopped shaking, I was asked another question like if nothing had happened. 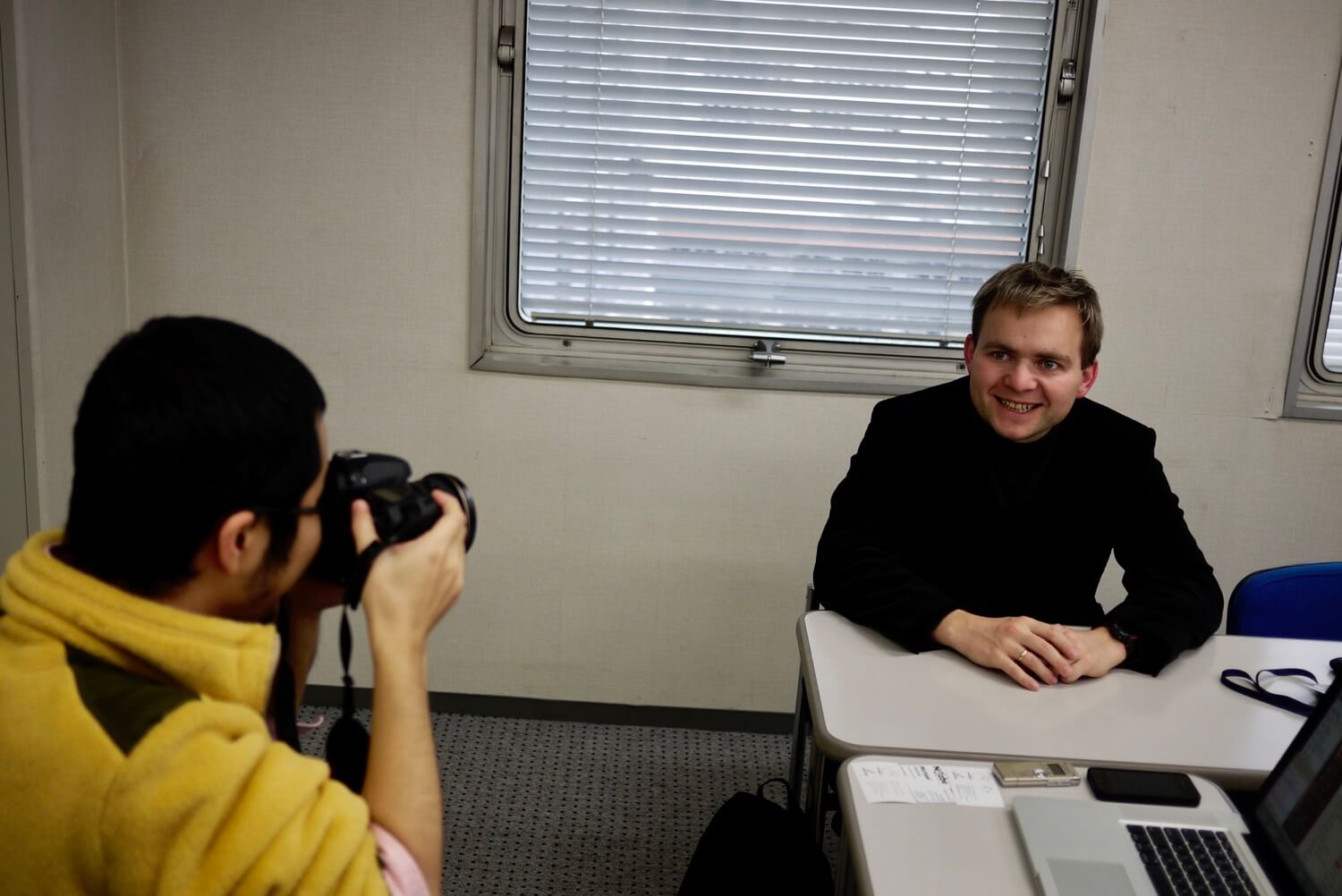 In the end, the interview got published with lots of publicity for Nozbe. So not everything turned bad. 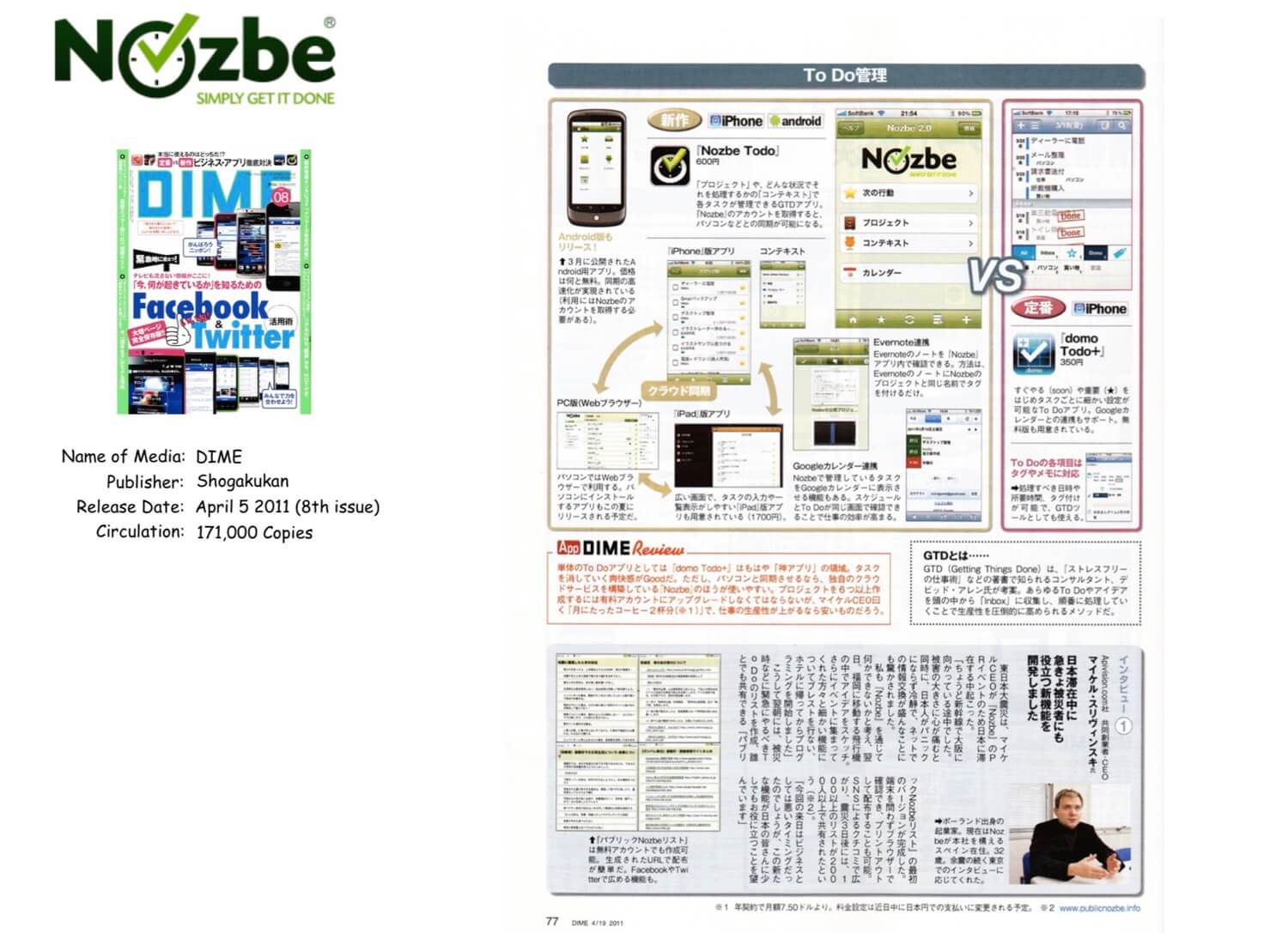 Tokyo was completely empty. My Japanese friends were surprised to see it all like this, but apparently that’s what the aftermath of a major earthquake looks like. 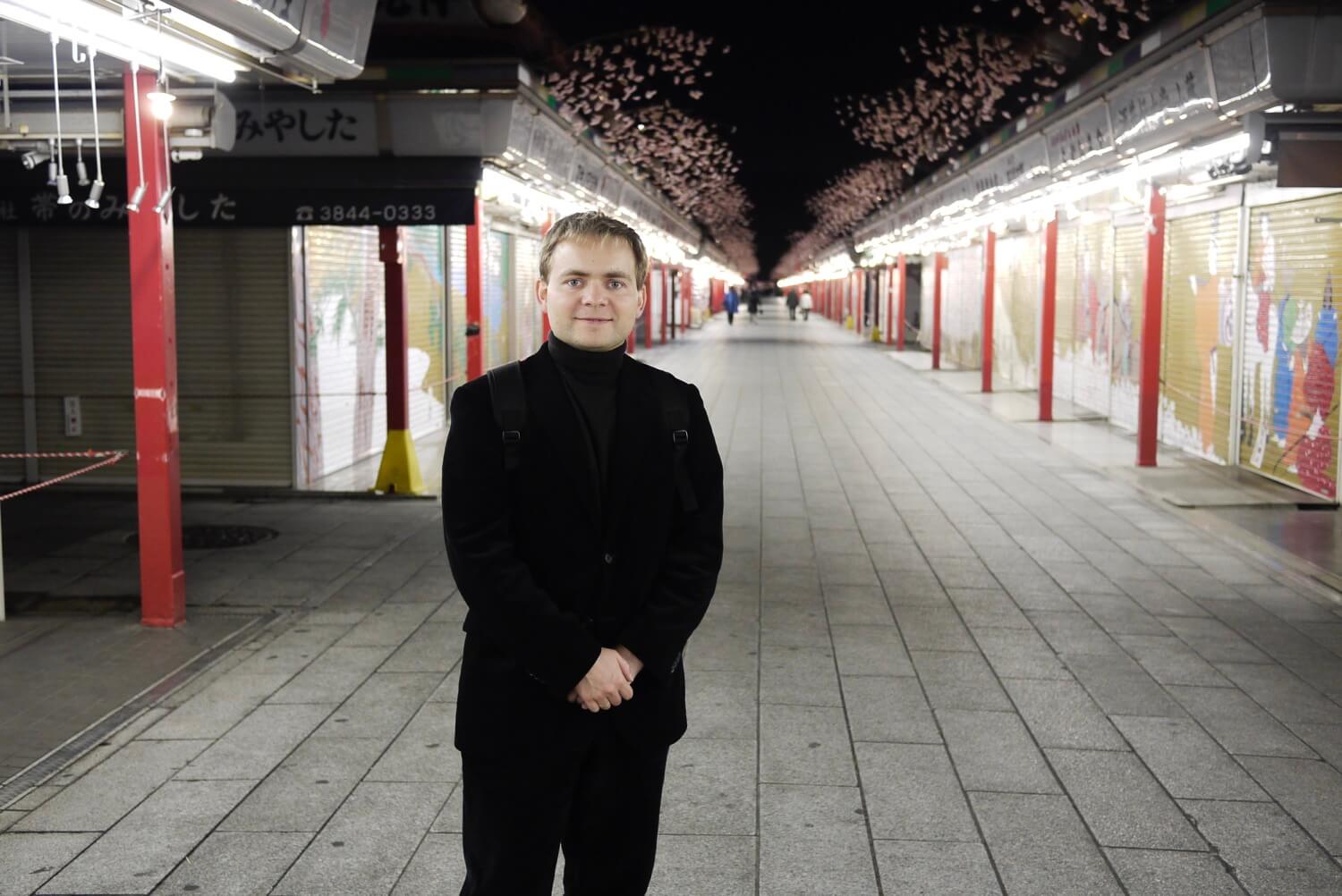 In the end, I had to cut my trip short. My job was done for now. My return flight was in a week but I had nothing to do in Japan anymore. The #PublicNozbe projects were working. The Japanese were coping with a tragic situation and I had to get back home to my family.

I vividly remember the last dinner with my Japanese friends: Zono, Kiran and Toru Mori. We had a very delicious Shabu shabu. 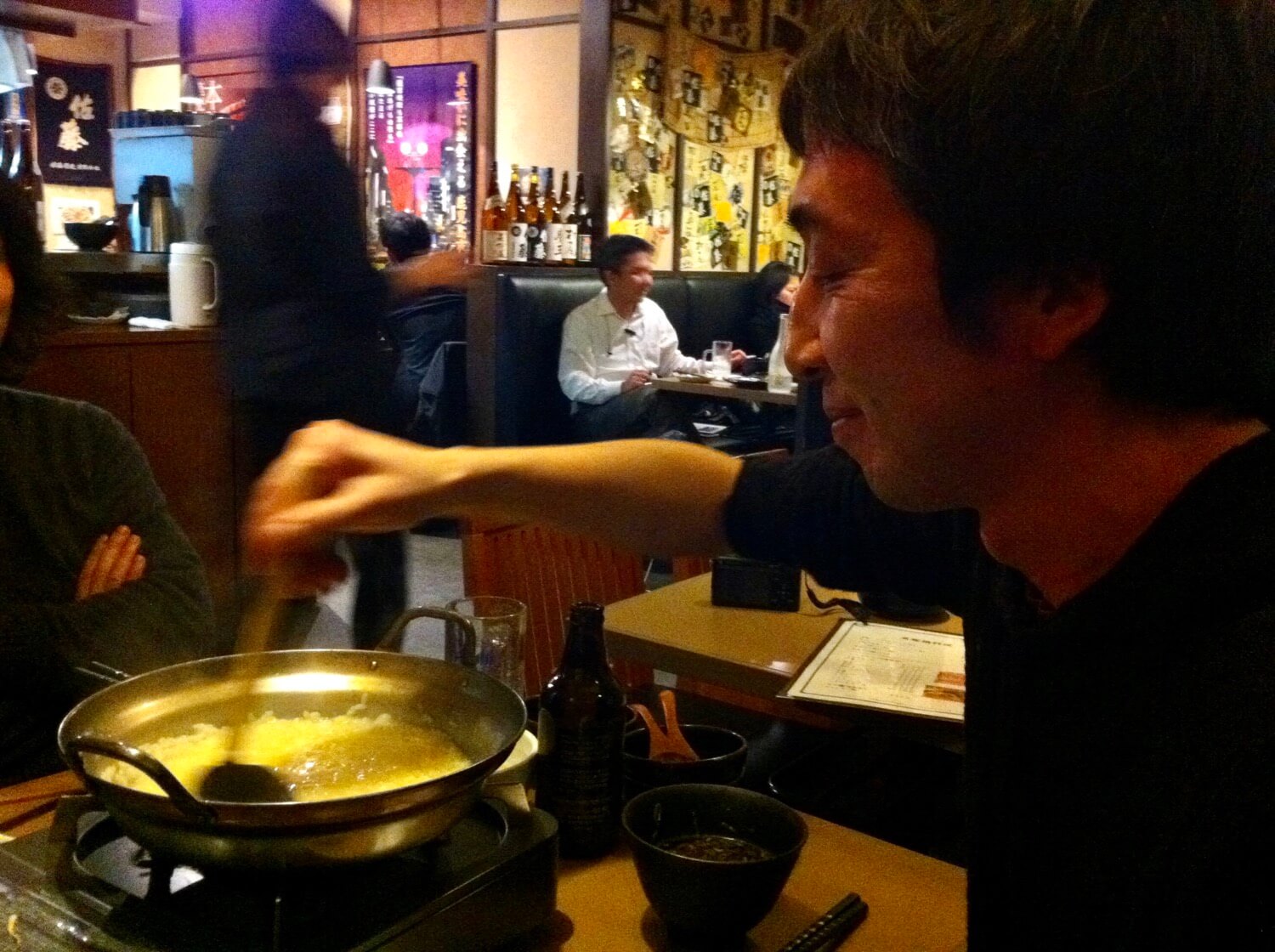 I went to Narita Airport outside of Tokyo and went to ask Air France if I still could fly back early even though my official flight back was scheduled a week later. They told me that since my ticket was the cheapest fare and had no refunds or changes, I had to buy a new one-way ticket.

I bought the one-way ticket and hoped they’d squeeze me in for that night’s flight.

The flight was overbooked. The very nice and polite Air France employee apologized, told me that I’d most certainly fly the next day. He helped me find a hotel room for the night at a local Hilton. I went to sleep and hoped for the best.

March 16, 2011 - flying back in Business Class through Seoul

I showed up at the airport early in the morning. That same polite Air France employee was there and quickly waved at me. He told me he bumped me to the Business Class at no additional cost as there were quite a few seats available there. Life was good again.

Then another strong shock went through the Narita Airport. It was shaking so strongly that I was afraid the lamps were going to fall down on our heads. I badly wanted to return home.

Once I boarded the plane, I found out that not only did I get a great Business Class seat, but also the seat next to me was empty! Once we were in the air, the horizon above Japan looked so calm: 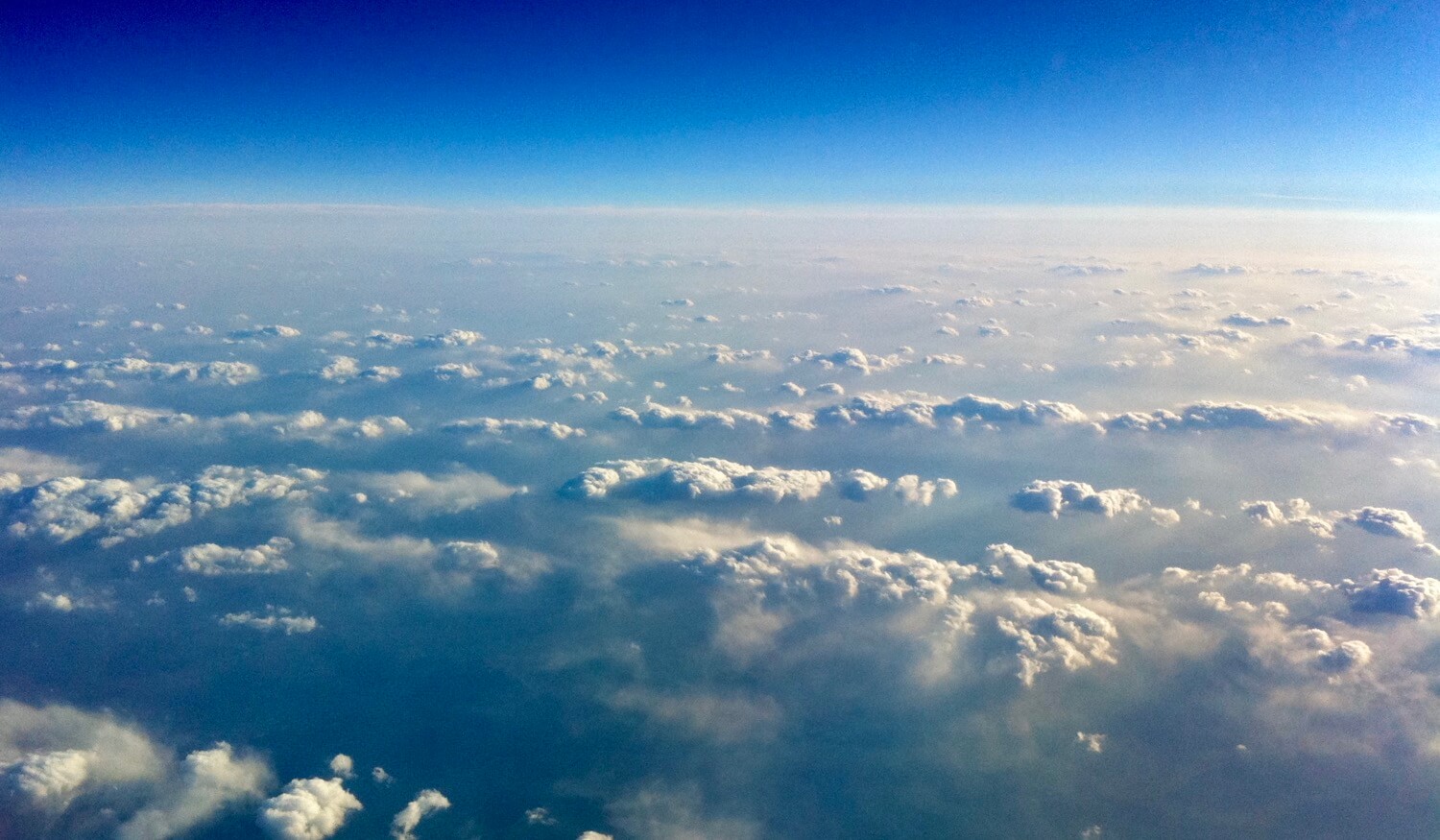 The curious part is that because of the earthquake, Air France’s flight attendants moved to Seoul in South Korea, so our plane took off from Tokyo and after a short while landed in Seoul. We parked on the runway and we were told to stay put. Meanwhile the crew changed and loaded the plane with food and other necessities.

Earthquake in Japan - a true roller-coaster!

I hope that everyone in Japan got back on their feet after the tragic earthquake 10 years ago. I was lucky that nothing happened to me and that instead I had a very special time and lots of firsts in my life:

Yes, it was a true adventure for me. Can’t believe it happened a decade ago…