Just like every year, I “needed” to change my iPhone for a new one. This time, however, I decided to wait for the iPhone X instead of immediately getting the iPhone 8 Plus, and now it’s finally here! I’ve been using it for two months now, and it does not cease to amaze me. Read on to find out why and how the new iPhone boosts my productivity! :-) 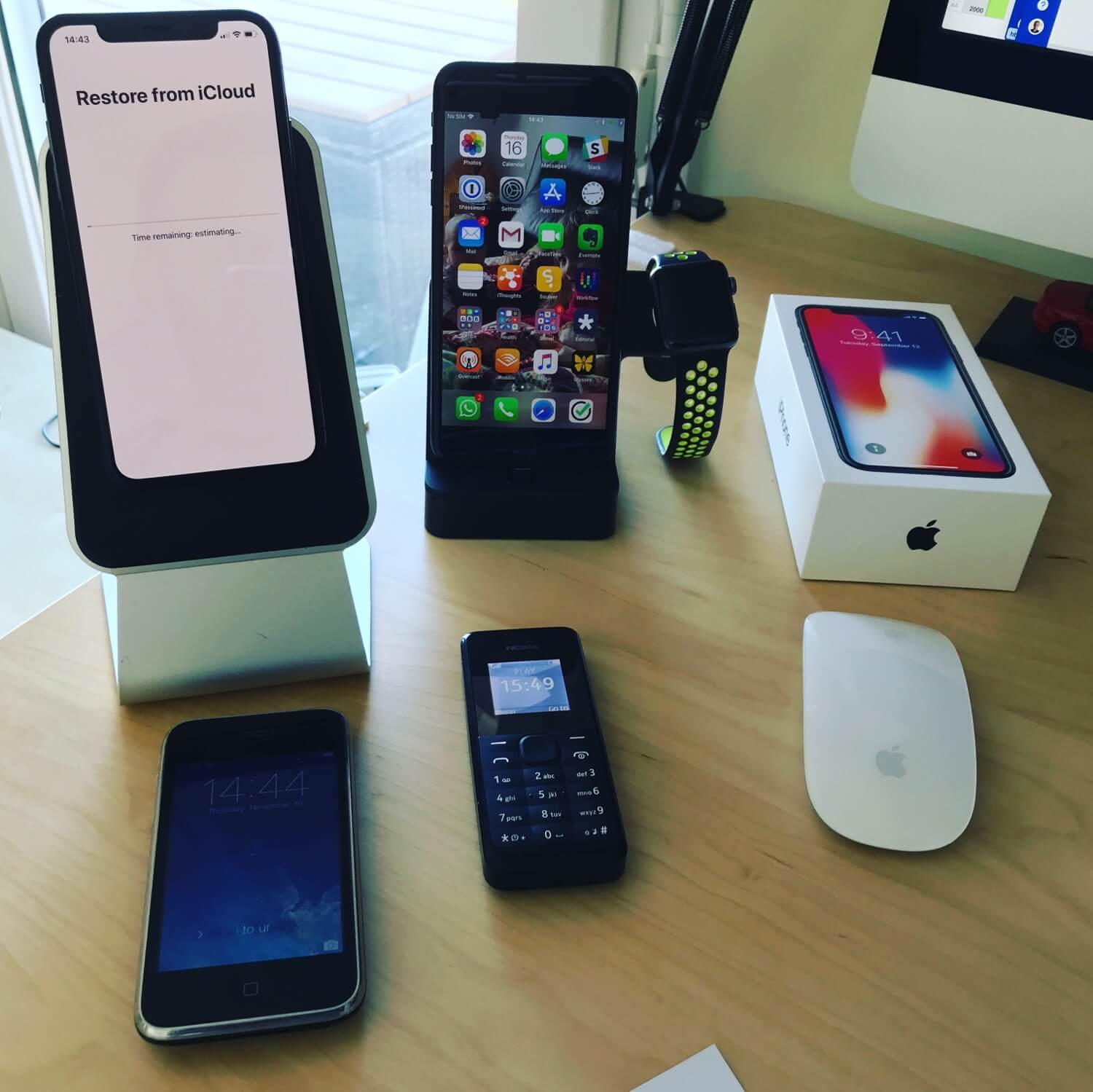 Note: The following article appeared first in the December ‘17 issue of iMagazine, the leading lifestyle magazine for Apple enthusiasts in Poland. I’m a regular contributor and write my monthly productivity column there.

OK, enough with notes… let’s start the review with my favorite feature - FaceID:

When Apple announced FaceID, I had some doubts and concerns about it, but now, after a few weeks of using it, I can safely say that it works much better than TouchID.

For a start, it works “in the background”, meaning I don’t have to wait for the iPhone to ask me to do anything. With one swipe up, the phone magically unlocks itself. Sometimes the word “FaceID” briefly shows up while the phone is transitioning to the home screen, but in most cases I don’t see it at all. It almost seems like there’s no protection at all. It’s that easy!

Using apps like 1Password, mBank (my mobile banking app), or other apps that until now were protected with TouchID has become much more convenient. I just open an app and I’m instantly signed in, with no extra moves required on my part.

FaceID proves really useful in situations where I have wet hands – for example, right after getting out of the shower. TouchID never worked in those cases. On the other hand, my wet face is never a problem for FaceID. Similarly, TouchID refused to work when my hands were very dry, which is a frequent problem for me, especially in the fall… fortunately the skin on my face isn’t an issue for FaceID :-)

The small size is a step forward

I’ve been using a Plus-sized iPhone for the past three years, so I’ve pretty much grown accustomed to larger-sized phones. I’ve even gone so far as to adjust the pockets in my pants to be able to carry it around. Now that the iPhone is much smaller, it offers better mobility and more easily fits inside my pockets… and, thanks to its new, bigger display, I don’t feel like I’m missing out on the advantages of the iPhone Plus.

Finally, something Apple has always been aiming for: the display and small “notch” at the top take up the entire front of the device. All screen and nothing else. No buttons. Absolutely nothing! The screen is longer than on the iPhone Plus but narrower.

For example, when I have Nozbe opened on the iPhone X, I can see 11 whole tasks and a part of the 12th one. In comparison, the iPhone 7 Plus shows one task less, meaning the iPhone X shows more content in vertical mode (which is how most people use their phones)! Same goes for articles saved to Pocket: they take up the entire display… Wow!

The OLED screen does its thing – black is… black!

Though I’ve read many opinions that the OLED screen is better and “blacker”, they seemed hard to believe… That is, until I unboxed my iPhone X! It’s particularly amazing when you set the Black Dark Mode in the Reeder app. I also changed the default template in iThoughts and MindNode to the one with the black background, and I’ve changed the Home Screen background to default black as well. Its deep black color is comfortable, beautiful and less tiresome for the eyes.

As I also want to be able to enjoy the black mode in my own app, at Nozbe, we’re already working on the “Black Dark Mode”. Fortunately, my designer also owns an iPhone X, so he quickly took to the idea… Hopefully, the update will be ready to ship out soon, making it possible to change the task display mode into a truly black background!

A lot of people say that instead of the so-called “notch” (a cut-out at a top of the display), Apple’s designers should have left a smaller screen with a built-in black bar. Personally, I do like the notch. Thanks to the fact that both sides of the notch display additional information (for example, about the watch or connector type), the entire area below the notch can be fully utilized for app content. Awesome! Additionally, the notch gives the iPhone a distinctive look, and it doesn’t bother me whatsoever. I’m also glad that there are no elements on the bottom edge of the screen and that’s much more important to me!

No “home” button? It’s not like I’m missing it…

What bugged me with the iPhone 7 Plus was that “home” was not really a button but a pressure-sensitive touch surface with vibration feedback… Now that Apple has dropped it, everything has gotten much better. At first it was a little strange but I’ve already gotten used to the “swipe up” gesture, and now it feels completely natural to me - to the extent that I sometimes try to do the same gesture on the iPad, and I don’t get it why it’s not working. Now, all we have to do is wait for a “Home” button-less iPad Pro (Apple, please take my money and create one this year!).

Other iPhone X gestures were also easy to get used to. Especially the one for switching between apps – to jump to the previously used app, all you need to do is swipe right on the bar at the bottom of the screen. This way you can quickly return to the last-used apps. Everything works quickly and smoothly – credit for this also goes to the new A11 chip.

Bonus tip: to view all open apps, you just need to do the following: swipe a little bit up and immediately to the right. This gesture is much quicker to use than the one that Apple officially describes for viewing open apps. Be sure to check it out yourself!

And suddenly all the other iPhones seem so old

Though it may sound strange, right now, when I look at my wife’s iPhone 6S Plus, it feels outdated. Although I know it’s a little snobbish, unfortunately Apple has done it again – it managed to design something that’s radically different and even more technologically advanced than its previous products.

Why a case is an absolute necessity with the iPhone X

For most of the time, I used the iPhone 7 Plus without a case. It managed to get some scratches, yet it survived and it still looks beautiful. However, with the iPhone X, I’m worried that even dropping it from a small distance or using too much force while putting it away on a marble kitchen top may shatter the back glass into pieces. To prevent that from happening, I got a Mujjo Wallet case - I use the back side as a storage compartment for my driver’s license, which means I can use my phone as a wallet again.

Wireless charging as a bonus

Android users were right. Inductive or wireless charging is super-convenient, and the chargers themselves are quite cheap. I already have two of them at home and it’s nice to be able to put your phone away in the protective case knowing that instead of it just laying there, it’s also charging itself.

What’s more, I don’t have to wait for AirPower or purchase expensive chargers like Belkin or Mophie because there are plenty of decent inductive chargers on Amazon for less than EUR 20.

Being a business owner myself, I can understand why Apple has decided to position the iPhone X differently than it did with the iPhone 8. The result is that now iPhones are available in every price range. Unfortunately, the huge price tag means that many people won’t be able to afford it.

Just like all of my previous iPhones, the iPhone X is one of my main tools for work. As you may already know, my main computer is my iPad Pro (which I’m using right now to write this text), and right after that – the iPhone. I have no doubt that it will pay itself off within a year or so, perhaps even many times over… And, what’s more, next year I’ll still be able to sell it for a good price. One way or another, you may want to consider whether all you want is just a new iPhone or if you actually need it for work.

Summarizing: the best iPhone so far…

If not the best smartphone in the world! Using it is super-enjoyable, and with its improved display, amazingly well-working FaceID, smaller size and, of course, faster A11 chip, I have no doubt that it’ll become the most “productive” iPhone I’ve ever used. Using it as a tool for getting work done is a pure pleasure!