On Saturday I watched the Ski-jumping contest on the first day of the 2010 Vancouver Winter Olympics and a short, humble guy from my home country of Poland got a silver medal in the individual ski-jumping competition. This guy is Adam Małysz - one of the greatest sportsmen in the ski-jumping history, of the biggest sports figures of my country and definitely the greatest one of my time. 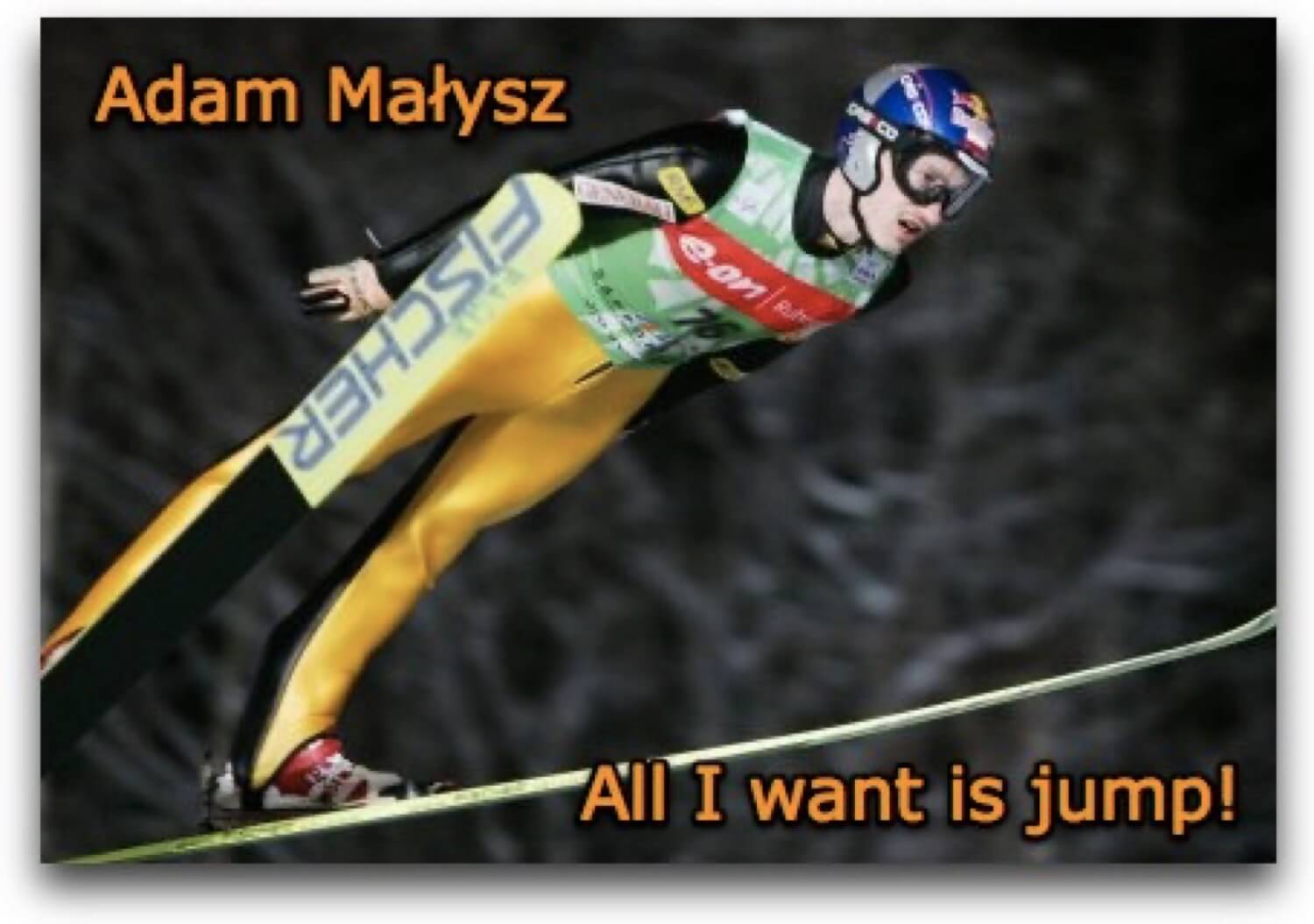 Chances are you haven’t heard of Adam, go on, read his biography on Wikipedia, this guys has practically won it all. Now, at the age of 32 he still won the olympic silver medal, beating a decade younger athletes, showing that his passion for winning and spirit is still in a very good shape.

Why is Adam Małysz a role model fro me? (and for millions of people in my country!)

There are several reasons for that. I believe anyone who wants to achieve something in their lives, should look at Adam and learn from him these several things:

1. Adam loves ski-jumping. He enjoys every single jump he makes.

He just loves it. I mean really loves it. When asked before jumping what’s his goal, what length of jump he wants to achieve, how high, etc…. he’s answer is always the same: “I just want to perform a very good jump”. That’s all he cares about.

I remember when he was on the very top of his game and had only one opponent: German guy named Sven Hannavald and they were very close points-wise to the overall World Championship standing. There was this one competition when they jumped only once and Adam was winning. Due to bad weather conditions the judges wouldn’t allow for the second jump, so the results from the first jump where final. Adam won. Yet he was angry. Why? Because he didn’t care about the points. He didn’t get to jump again. All he cared was to jump again. He loves it so much. He doesn’t calculate the points, he’s not a mathematician. He’s a jumper.

2. Adam is humble. He’s never too bold or too proud.

He’s just this nice guy who is constantly smiling, thinks about the positives and never says he’s the best. Although he is. He really is one of the best (if not THE best) in the ski-jumping history.

The journalists just love doing interviews with him, because he’s nice, polite and easy to talk to, and he’s never proud or showing anyone he’s better. Incredible.

Leaders change, idols change, people give up on their idols. Adam never gives up on himself. He’s constantly on top of his game… and even when he’s not, he’s working hard and… he comes back!

He was dominating in 2001, 2002 and 2003 where he won 3 World Championship Cups in a row… and then he didn’t…. until 2007 when he won it again…. and now people said he should stop… and he comes back and takes the olympic silver medal sending his much-younger competitors home.

4. Adam keeps on training and improving.

Even during the Summer season he still jumps in the Summer Cup. He loves jumping so much he always finds the time and place to practice. He keeps his form, shape and is still on top.

He’s persistant and it pays off. Big time.

With all that fame in Poland, so many fans and so much money, he still lives in his home-town Wisla, with his wife and his kid. His wife very often comes along for the tournaments to support him.

He knows his priorities and he knows that family comes first. And he’s always known that.

I’m very close to the ideal, but there is still room to improve. It’s great I have Adam as inspiration.

Who’s your role model? Why?