Normally on this blog I’m not writing much about details of my app, Nozbe. I write about lessons learned in business, life and the like, but hardly about the particular features of Nozbe app… however when a feature helps me become a better CEO, I think it deserves a highlight. Let me explain why I hate asking people for status updates and why the “Activity” view in Nozbe helps me stay on top of things without doing any kind of asking. 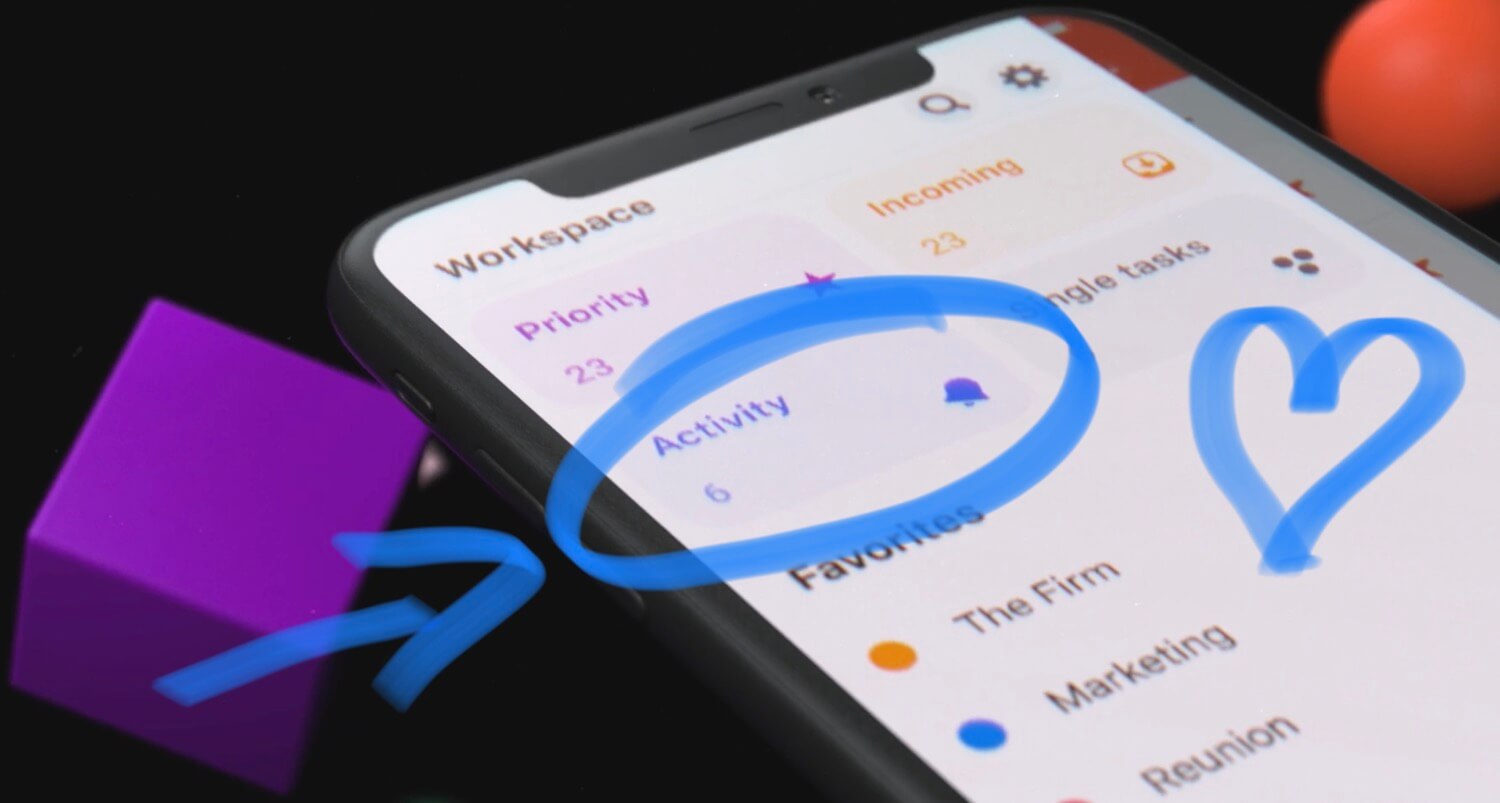 The CEO needs to know the status of things!

As the leader of the company it’s my job to know what’s going on. If projects are progressing. How are the things going along. If there are any roadblocks ahead of us.

The buck stops with me. I need to know this stuff.

After all, the CEO’s responsibility is to plan ahead and execute on the vision. And they can’t do that if they aren’t aware of the situation around them.

The “old school” of status updates…

Before Nozbe the CEOs would get status updates in a number of ways:

…and getting status updates the “old way” sucks!

These ways of getting status updates is bad on many levels:

Problem 1 - Updates through meetings are expensive

Too many meetings and too much email - which basically means that too many people are involved in a type of work that doesn’t produce results. And potential of irregularity or forgetfulness.

I know it sounds silly, but people expect the CEO to know. So when the CEO is asking about a status update, they admit that they have no clue what’s going on.

And it’s not just the fact of being perceived as a person who is clueless, but just feeling clueless. I want to feel like I’m in control. Like I know what’s up. At all times.

Problem 3 - status updates through meetings or email may contain incomplete information or nuance which was important!

Very often the person who’s preparing a status update might not focus on things that the CEO needs to know. Or they might omit something which to them seemed trivial but to the CEO was key information. Both people might have different perspectives.

The new way of getting the status updates - just get them, don’t ask for them!

These days I hardly ever ask anyone for a status update, because I don’t need to ask. I can just get it. I can read it. It’s there generated for me automatically.

How can a status update be generated automatically? Well, it can when all the projects are happening transparently inside Nozbe!

Step 1. Use the new Nozbe for all the projects in the team

Anyway, as I have access to all the projects, if I want to know how a particular project is doing, I can just check it out. I can find this project on our list, open it and review the tasks there. If there’s still something I don’t know, I can just add a comment to a particular task asking for details.

Again, before I ask anything, I can review the project first.

Step 2. Go through the “Activity view” in Nozbe regularly

As the CEO, just be reviewing the “Activity” view gives me an overall outlook on what’s going on in my company. Even though we’re completely remote and I don’t see people face to face, I know what’s going on! Without asking!

Today is Friday, a Mighty Friday, so going through the Activity view is basically my way of doing my Weekly Review.

In the new Nozbe you can not only follow a project - you can even follow a particular task or tasks in projects that you’re not following. This is a true game changer.

Each new big feature in Nozbe gets its own project and one of our programmers is responsible for it. I don’t follow these projects as I don’t need to know the details of how these features get done. Our QA engineer and product manager do that. But I want to know the status of the feature - how it’s progressing.

Our solution became adding one “status task” in each of these projects. Then the programmer responsible for the feature mentions in a comment to this task everyone interested, including me. This way I’m automatically “following” this task and I get updates to this task in my “Activity” view.

That’s my way of staying on top of each new Nozbe feature without knowing all the nitty-gritty. It’s fantastic. I get all the information from the status task and if I ever want to know more, I can always open the project and review it.

Again, I know the status of the feature without ever asking my product manager, QA engineer or the responsible programmer.

I’m not interrupting anyone or creating artificial status meetings to know what’s going on.

Example with a screenshot from my actual Nozbe account

Just look at the screenshot below: 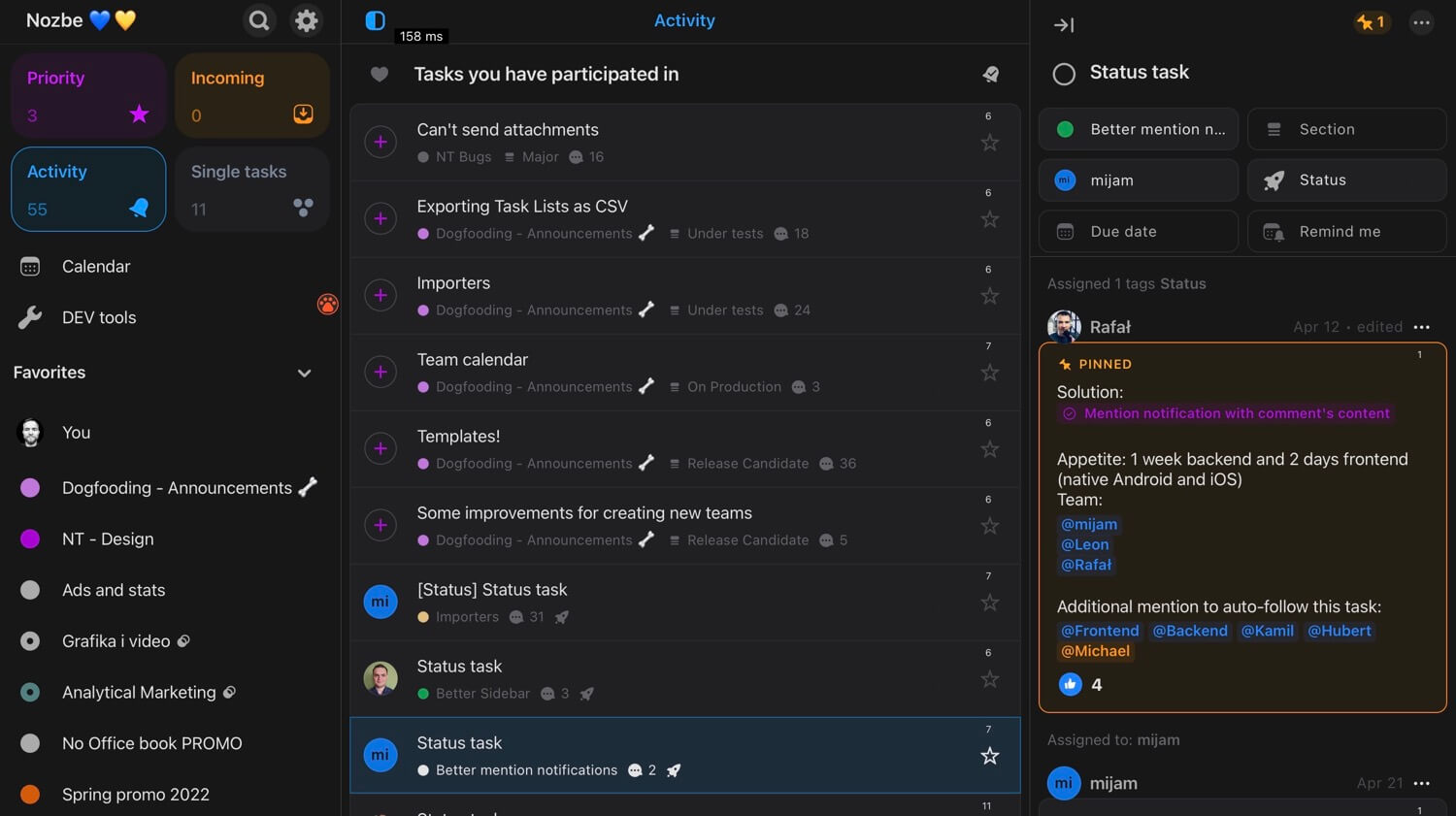 On the screenshot you can see the 4 Nozbe quadrants of Productivity with the “Activity” view open.

Be a better CEO thanks to Nozbe!

That’s right - if the whole team’s communication is in tasks, we have fewer meetings, we don’t use email internally and I can review everything what’s going on even on my iPhone on a Friday like today which makes me a better CEO.

You should try Nozbe, too. It’s free for up to 5 people and 5 active projects, so there’s no excuse!