On Tuesday Apple announced a new revenue stream for them in their iOS Appstore called “Subscriptions”. It basically means that if you’re a web developer and charge the users a monthly fee, all new customers that come to you via your iOS app available in the Appstore, cannot be redirected to your site to purchase your subscription but need to buy it right there “in-App” and Apple gets 30% cut from this every single month.

First reactions of tech industry were quite harsh on Apple but some later realized that it’s OK for Apple to take the cut… while others disagree. It’s complicated… but the point is - Appstore is just one of the many revenue channels and it should be treated like this. It’s like Apple becomes your affiliate partner. 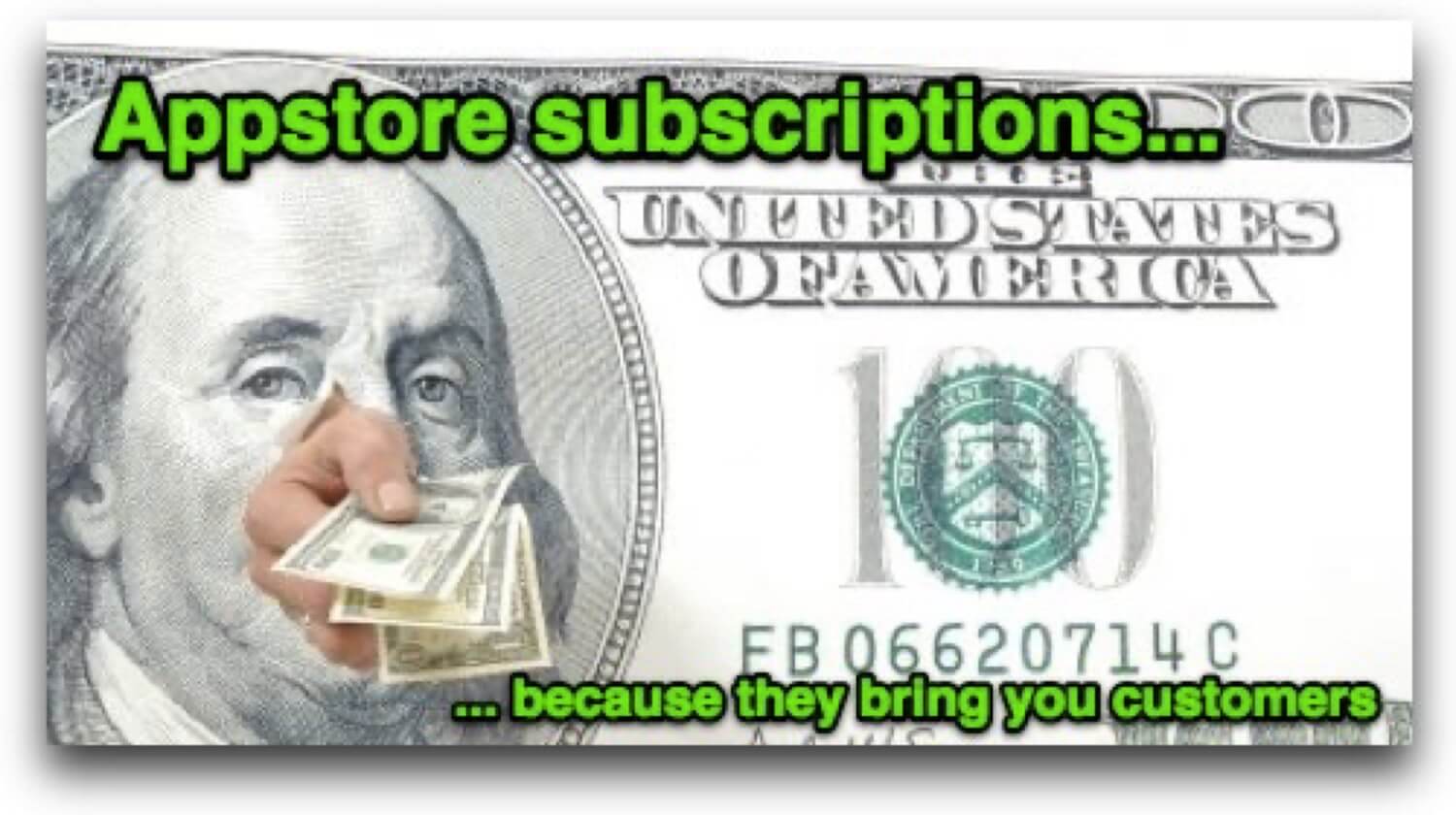 Why do you need an iOS app anyway? Ah, right… because you want new customers!

1. Because you want a great iOS experience for your users

Apple is not stopping you here. You can still offer a great iPhone or iPad app and ask the user to log in and when they do, they can sync their local data with your web app and use it on the move. It’s what I do with Nozbe iPhone and iPad apps.

2. Because you want new customers from the big Appstore

Please be honest here - you want the new customers that Apple brings you, but you don’t want to pay Apple for bringing you these customers? This ain’t right. I pay my affiliates a recurring commission of around 25% per customer every single month, because I think it’s the right thing to do. If someone brings me the customer via an affiliate link, I believe they should be paid for that and that’s it. I wouldn’t probably get this customer if it wasn’t for them. Apple has just become a new affiliate partner for me. Not more not less.

It’s not like the Appstore is your only revenue-generating place… and if it is, find new ones!

Apple doesn’t limit you to selling your app exclusively through the Appstore. It’d be ridiculous. You are free to sell through any other channel you wish - your web site, your Android app, your Blackberry app… you choose. However, if your main revenue generator is the Appstore, then Apple should take the cut. It’s their house and their rules.

When the Mac Appstore launched, I heard developers complain about 30% cut from their apps… but I don’t think the guys behind Pixelmator (an image manipulation app) complained when they earned $1M in the first 20 days their app was in the store… and it was for an established app everyone knew about and presumably had before.

Appstore is like a busy shopping mall… but if you want to sell in the mall, you need to rent the place

What counts in business? Location, location, location - so if you want to sell in the busiest shopping mall, you need to rent a place there and very often pay outrageously high rent fee and even some revenue share in some cases. If you’d want to sell stuff there without paying these things, you’d be thrown away by the security guys. Even if you’re an established business like “Starbucks” you can’t just go in and say: “we’re Starbucks and well coffee everywhere else, so let us sell coffee here without paying you a dime”.

Appstore is one of the busiest “shopping malls” for software now and if you want to be there and get new customers thanks to Apple, then pay the price - again, it’s simply one of your sales channels. If you look for customers on Google and use AdWords - do you get them free? No, you need to pay for these and they are a part of your “customer acquisition price”. Appstore was long enough kind to let you “get around their back” to sell subscriptions elsewhere.

User Experience is great - for both customers and publishers

I’m constantly tweaking my Nozbe Signup page and Checkout experience and I still see people ordering and not completing the order… and I need to ask them for lots of data (credit card companies require it) and it’s a process that I’m now optimizing even more to make sure I don’t ask the same data repeat customers again.

With Apple’s system it’s just brilliant - people get your app from the Appstore, they use it and if they decide to go the subscription route, they just click one button and that’s it. As simple as that. I’d pay 30% for this kind of ease of getting new customers. When my affiliates bring me new Nozbe users, these still need to go through the checkout process… with Apple it’s so simple. One click, and bam, new customer! Nice.

There are some concerns though

The only concerns I have with the Apple’s subscription system is their APIs and integration with our current web apps. We need to be able to refund users easily through some API calls, we need to be notified when the users stop paying, when they unsubscribe, etc. These tools need to be top-notch to make sure publishers can flawlessly integrate with their current systems. Apple is known for creating great user experiences for customers but not for developers (iTunes connect was really bad when Appstore started) so I hope they’d iron this out.

People seem to lose objectivity when it comes to money

As much as I respect my peers in the industry, some folks are losing their objectivity when it comes to money. Apple creates a new revenue-generator for us? Great. We need to share this money with Apple? Not so great. Come on, this is not right. We are in the software business where we can set margins as we like and where our fix costs are not as high as in the manufacturing business. For me personally Appstore has been a great experience so far - my iPhone and iPad apps haven’t brought me many new customers but they have served well for my current customers and they’ll continue to serve well for them in the future to come.

Will I have problems integrating new Apple’s model into my own? Yes. Will it cause more work for me? Definitey. Am I not happy sharing 30% with Apple? Well, I’d rather share less…. but it’s their house and I respect that. If they bring me new customers I’ll happily pay their cut for as long as the customer stays with me. If they bring me 1M new customers, I will not complain. Nor should you.

HTML5? I love it, but native apps are just better and users seem to vote (with their money) on these and although the call is tough, we’re leaning towards native experiences over web-based in our developments of Nozbe for this year.