Yesterday, as every other Sunday afternoon I spent watching Formula 1 GP race admiring the fastest vehicles on earth racing for the GP of Turkey and of course cheering for some of my favorite drivers, among them the only Polish driver - Robert Kubica - who finished 6th. However the race was all about two drivers of the leading Red Bull Racing Team: Sebastian Vettel and Mark Webber. 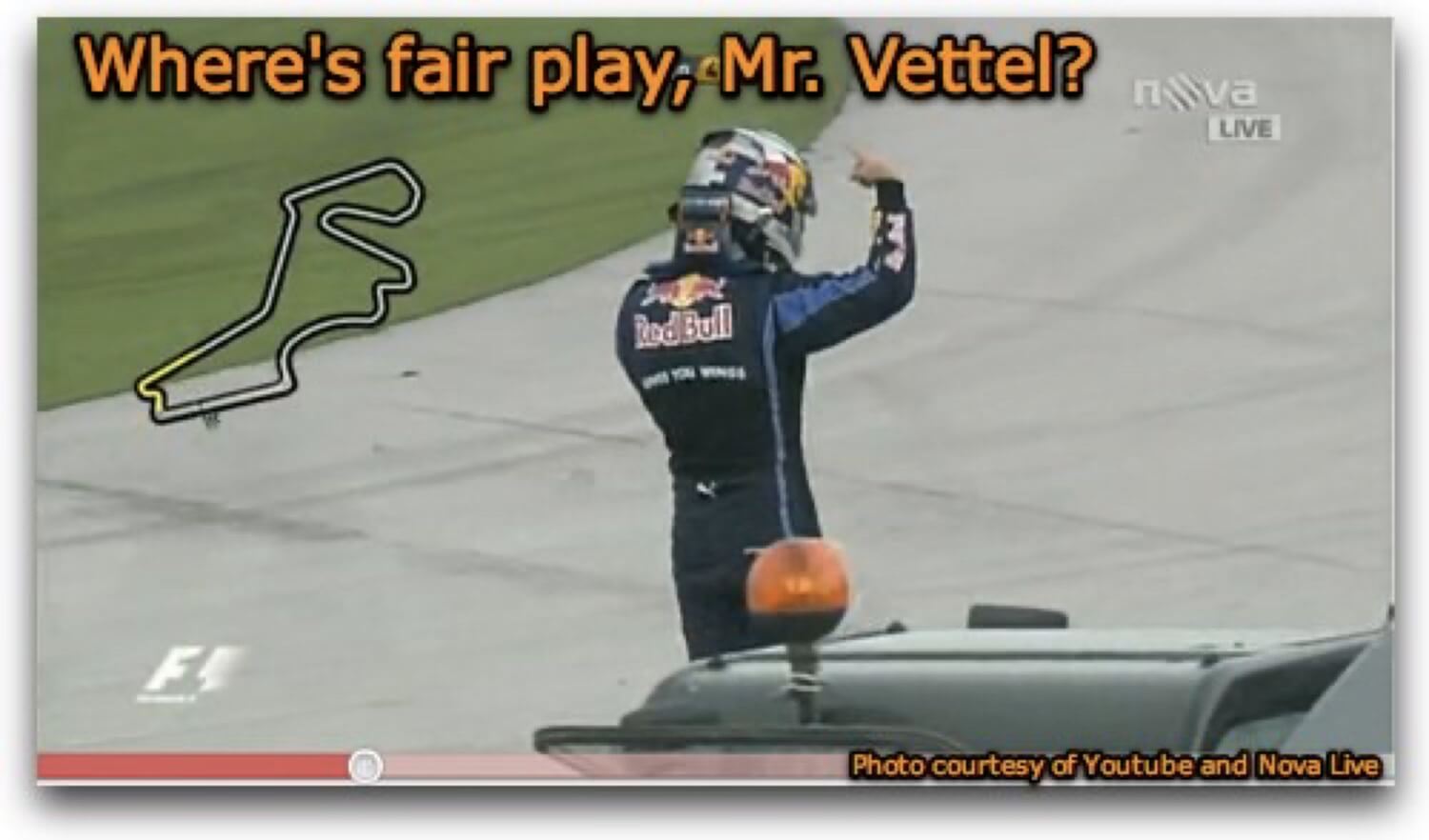 Racing incidents do happen all of the time in Formula 1

These guys are driving at speeds close to 200 mph and drive ~60 laps (~2 hours) with adrenaline at the highest level possible, so accidents and incidents do happen. Cars fail, people fail and things do go wrong. But it’s not about not making mistakes. It’s all about dealing with mistakes and showing true sports spirit and real integrity.

Sebastian Vettel was following his teammate and at one of the corners achieved a higher speed and decided to overtake M.Webber. He was faster, but not fast enough and when they were approaching next corner at full speed, Vettel, noticing he’s not going to make the full overtake, instead of slowing down, rammed into his teammate trying to force him to make him place. Well, they collided and Mr Vettel didn’t finish his race and both leading drivers lost their chance at winning the race.

Later, after the race, Mark Webber, although very annoyed, just said Vettel turned too quickly and this happens… and Vettel said it wasn’t his fault and that Mark Webber was supposed to make place for him.

Are you serious Mr Vettel? Do you really want people to believe that? Why would Mark have to make place for you? Weren’t you both guys racing? If you’re overtaking it’s your responsibility to find place to overtake… and Webber didn’t change his route - he was just driving forward.

Last year Sebastian Vettel did a very similar thing. This time he was being overtaken by a lot faster Robert Kubica during the finishing laps of GP Australia. Robert was faster and was overtaking and was driving his lane and Vettel knew he was too slow to defend his place and what did he do? He rammed into Kubica and both didn’t finish the race. Not nice. Not cool. Definitely not fair play.

Later he said - “I’m sorry team, but it wasn’t my fault”. He wasn’t to blame for him crashing at his opponent. Luckily the stewards (refrees in F1) noticed that it really was his fault and he got a penalty.

Being a F1 driver makes you a role model for many. What example do you want to give?

The problem I’m having with such a behavior is the fact that Mr Vettel is currently the most promising and definitely most talented German driver. They even call him “little Schumi” (as of Michael Schumacher junior). There are many boys watching him race, listening to his interviews and following his footsteps. He’s a role model to many.

Sport is supposed to inspire people. Is supposed to show we can be great athletes and achieve great success. With real spirit of competition and integrity. Sebastian Vettel is young and is very talented. Sadly his talent doesn’t come bundled with integrity. He’s showing that he wants to win no matter what. No matter ethics, no matter integrity. Win is all that counts and if takes casualties, it’s OK.

Is this an example we should be showing to our children? Winning no matter what?

Great we still have examples like Adam Malysz, sportsmen with true integrity and spirit.

Shame on you Mr Vettel - hope young German drivers will still learn fair play from bad examples like yourself.