When I went on vacation to the United States in 2012, only bringing my iPad 3 with Retina display with me, my colleagues from work and friends were astonished. They knew me well and knew that I didn’t go anywhere without my MacBook Air. And then, all of a sudden, I left it at home, bringing only my iPad for my two-week trip… saying I’d be trying to “work” on it from time to time. A few months later I was already #iPadOnly. The iPad 4 I got that fall officially became my main computer for work. That was also when I came up with the idea to write a book about using the iPad for work. 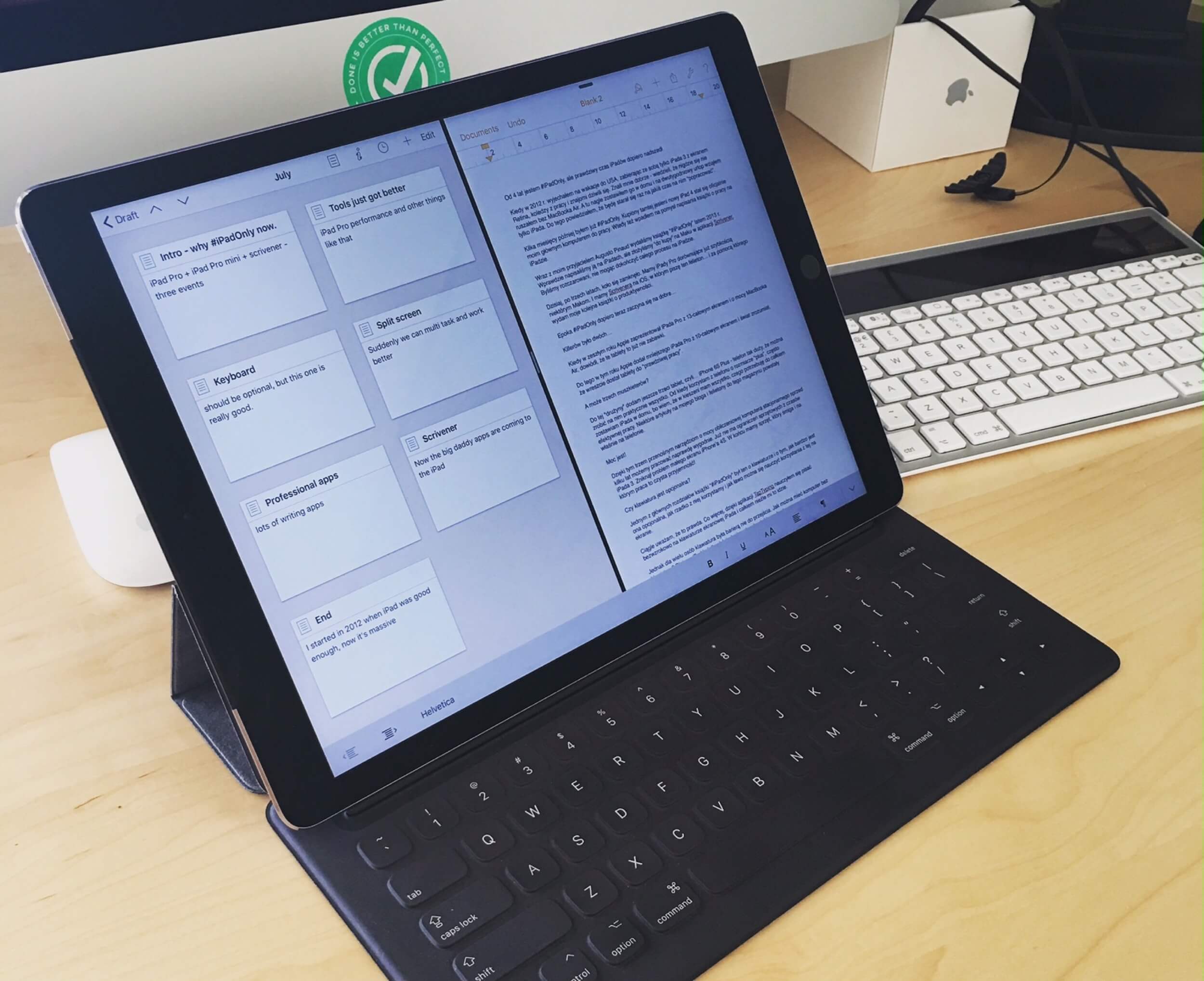 Note: The following article appeared first in the 8/2016 issue of iMagazine - the leading lifestyle magazine for Apple enthusiasts in Poland. I’m a regular contributor and write my monthly productivity column there.

Along with my friend Augusto Pinaud, I published the book “#iPadOnly” in summer 2013. Although we wrote it on our iPads, we put it together in Scrivener on the Mac. We were disappointed that we couldn’t complete the whole process on iPad. Well, not anymore:

Today, after three years, the circle is closed. Today we have iPads which are approaching the speed of some Macs. And we have Scrivener for iOS which I’m using right now to write this very article… and which I’ll use to publish my next books about productivity.

The #iPadOnly era has just begun…

When Apple unveiled the 13-inch iPad Pro last year, which boasted the same performance as MacBook Air, it was clear that these devices weren’t toys anymore.

Additionally, this year Apple introduced a smaller iPad Pro with a 10-inch display, and the world realized that now it finally had tablets for “real work.”

To this “team” I’ll add a third tablet, namely… iPhone 6S Plus – a phone that’s so huge that you can do almost anything on it. Since I started using my plus-sized phone, I’ve been often leaving the iPad at home, because I know I have everything I need to work quite effectively. In fact, some of my blog posts and articles for this magazine were created on the phone.

Thanks to these three portable devices that boast the performance of a PC, we can work really comfortably. The hardware limitations of the iPad 3 are gone. The problem with iPhone 4S’s small screen has disappeared. Finally we have devices that run fast and make working pure joy!

Is the keyboard optional?

One of the main chapters of my “#iPadOnly” book was devoted to the keyboard and how optional it is, how rarely we use it, and how easily you can learn to use the one on the screen.

I still think that’s true. Thanks to TapTyping, I learned to touch-type on iPad’s on-screen keyboard and I’m actually quite good at it.

Still, for many people, the lack of keyboard was an insurmountable obstacle. How can you have a computer without a keyboard? That’s why iPad was only a toy for them, a kind of faulty computer.

Yes, keyboards were available from the start… but only Bluetooth ones. You had to charge them, pair them and carry them with you. It wasn’t too comfortable. I had a couple of them myself and I often couldn’t decide which one to take.

When the Smart Keyboard was released along with iPad Pro, I didn’t like it. It was ugly, gray and oddly designed. As I mentioned in one of my previous articles, I couldn’t get used to the keyboard. However, after tests at the Apple Store I decided to buy it and I’m using it right now to write this article.

The success of this device lies in the fact that it’s always at hand because it “hides” itself in the Smart Cover. It connects with the device by means of a special port called a “Smart connector,” so you don’t have to charge it. It snaps on quickly and significantly simplifies work on the iPad. You don’t even have to think about it – it always works everywhere. And typing is quite smooth.

Multitasking or working in just one app?

One of the reasons I transitioned to working #iPadOnly was the fact that on iPad I’m “forced” to work only in one app. It allows me to focus fully on just one task. Due to the way iOS is designed, iPad naturally limits “distractors” and helps me work more effectively. But does it always?

And what if I need to check something?

Well, then I have to switch between apps, which minimizes the effectiveness of my work and is simply annoying. What’s more, some apps don’t save properly and don’t memorize where I finished work, causing my level of irritation to increase dangerously.

That’s why I often used to work on two computers at the same time – I used my iPad for doing my main work, and the iPhone to check various stuff in other apps. It’s feasible but far from ideal.

Split Screen to the rescue!

When Apple added the Split Screen feature to iOS which enables you to run two apps side by side, it gave me an incredible “productivity kick.” I didn’t realize how much I needed this feature until I started using it! Suddenly it became possible to write an article in one window while having Safari, Pocket or my Nozbe task list open next to it. It really improved my work flow.

What’s more, iPad Pro’s screen split in half is like having two 10-inch iPads positioned vertically next to each other. Now that’s what I call double productivity!

This small but very pleasing improvement helps make the iPad an even more powerful tool and, in effect, makes working #iPadOnly pure pleasure.

Much time has passed since 2012, when the only option for good data synchronization was Dropbox. Although it’s still a standard, more and more apps can “magically” sync data now, thanks to iCloud.

Working on the iPad and continuing on the Mac to ultimately view the result on iPhone is very simple and doesn’t cause a headache.

As I wrote earlier, it’s precisely thanks to these features that iPad Pro and iPhone 6S Plus are the two computers I use most often. Both give me access to the same data, so switching between devices is smooth and hassle free.

The selection of apps for work on iOS in 2012 was already quite huge but today it’s become almost a bottomless pit. Some people are even writing about “app boredom,” but for me it’s a sign of market maturity. Even Microsoft made a surprise move releasing Office for iOS, which was inconceivable back when I was writing my “#iPadOnly” book.

Text editor? Tool for managing tasks? Taking notes? Anything? There’s a wide selection to choose from. It’s all a matter of individual preferences – thanks to this diversity everyone can create their perfect #iPadOnly setup.

Scrivener for iOS and the circle closes…

I started this article by recalling the time I was working on my “#iPadOnly” book which I wrote in Scrivener and then put together on the Mac. Today, with its release for iOS, the circle closes.

Now I have a professional app for writers on my iPad, and from now on I’ll write all of my books and articles in it. Yes, even articles!

I wrote this article entirely in Scrivener for iOS on iPad Pro and I have to admit that it works simply great. I divided my work into sections, set up all the necessary stuff, and started writing. After I finished, I exported the text to Pages (it’s the format required by the publisher).

Full professionalism… on iPad Pro. Now, when such tools are finally becoming available for iOS, the #iPadOnly era is getting into full swing.

The circle has closed and #iPadOnly doesn’t surprise anyone anymore.

In 2012 I started the #iPadOnly era on iPad 3 with Retina display. Everyone was either laughing at me or looking at me with pity.

Along the way were iPad 4, iPad Air, iPad Air 2 and finally - iPad Pro. And also iOS7, 8, 9 and soon - 10, which I tested and reviewed in my last article. Both hardware and software have matured, finally enabling real work.

My editorial colleagues are writing more and more stories about their experiences with #iPadOnly. My friends on Twitter are boasting about their achievements on iPads. A new era is beginning and what Steve Jobs once said, that “PC’s are trucks,” is becoming true.

The apps matured too…

The release of Scrivener for iOS is a symbolic event for me. A professional set of apps for writers, available on iPad with a lot of identical features to its “Mac brother” and a touchscreen.

Now no one’s laughing at me anymore… right?

Something that was once viewed as odd and perceived by some as far fetched, isn’t like that anymore. iOS devices are becoming fully fledged tools for work and, as you can see, it took a few years, several hardware and software iterations and a change of mindset. But it finally happened. And I’m really happy about it. I wish you all productive work on iPad!