After so many weeks I’m still affected by the War in Ukraine. Spending some of my time in the western society I can see how people west of Poland still don’t get the gravity of the situation. I recently read an article: ‘We told you so!’ How the West didn’t listen to the countries that know Russia best - and it struck a cord: 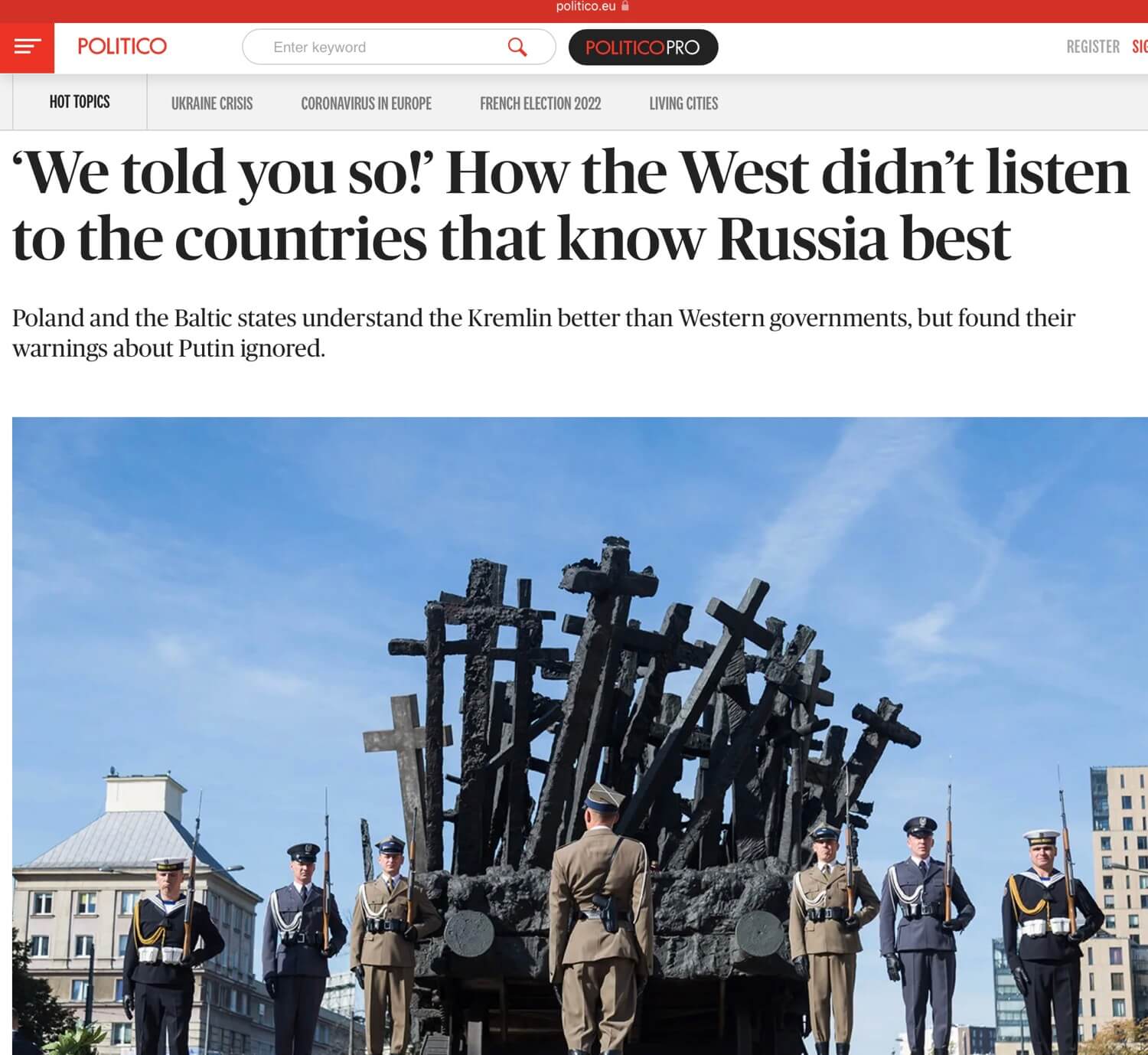 The leadership of Angela Merkel is being questioned

When the war started, I tweeted in favor of ex-chancellor of Germany, but now I see that I was wrong:

(..) Westerners followed a path of commercial and political appeasement of Putin, led by former German Chancellor Angela Merkel, which has now spectacularly backfired with the invasion of Ukraine, the bombardment of its cities and mass emigration.

There’s an interesting paragraph about her strange affinity for Russia:

She had been raised behind the Iron Curtain, but proved enigmatic on whether she really grasped the risk. “Privately,” Ilves (former president of Estonia) said, “she seemed to have few illusions, but I guess she saw that publicly, that’s something that she needed to do. Or she was telling me things she didn’t believe in. I don’t know. I can’t say.”

The problem is, Western European leaders didn’t treat us seriously:

“The Western Europeans pooh-poohed and patronized us for these last 30 years,” said Radosław Sikorski, a former Polish foreign minister. “For years [they] were patronizing us about our attitude: ‘Oh, you know, you over-nervous, over-sensitive Central Europeans are prejudiced against Russia.’”

The history with Russia is… complicated.

Poland has always been a bridge between the West and the East, and as we know from any history, the bridges get burned:

Poland lost its independence in the 18th century to a coalition of attackers led by Russia, fought Russia in two bloody and failed uprisings in the 19th century, and earned a stunning victory against the communist Soviets in 1920. The USSR got its revenge in 1939, seizing a half of Poland and meting out bloody punishment, executing 20,000 prisoners of war and deporting hundreds of thousands of civilians before subjecting post-war Poland to four decades of Communist dictatorship.

Ukraine is not in NATO, but all Baltic states and Poland are. Yet:

“When I demanded on numerous occasions that our membership in NATO be fulfilled by physical presence — and I was only asking for two brigades, which is to say 10,000 American troops — this was regarded as outrageous. Germany in particular, but others too, for the first time in history found themselves surrounded by exclusively friendly states. And they didn’t feel our pain of being a flank country, of being on the edge of the world of democracy, rule of law and security,” Sikorski said.

Modern Estonia was sending warnings, but nobody listened.

Estonia is a symbol of a very modern country. They run everything electronically. They are the poster child of a country that’s embracing 21st century, however:

In April, the Baltic country’s computer servers were hit by a massive wave of DDoS (distributed denial-of-service) attacks on public and private websites alike, essentially shutting the whole country down digitally for weeks. (..) While the Russian government repeatedly denied involvement in the cyberattacks, Estonia was unconvinced. (..) “We were told by some of our NATO allies in Europe that, ‘Oh you don’t know what you’re talking about, you’re just being Russophobic’ — and this at a time by people who wouldn’t know a computer from a toaster while we were already then part of the most digitally advanced [country] in Europe,” said Toomas Hendrik Ilves, who was the Estonian president at the time of the cyberattacks. He was born in Sweden after his parents fled the Soviet occupation.

Annexation of Crimea didn’t teach us anything…

Not only the West is oblivious, also some countries of the East are influenced by Russia. Sadly, Polish current government is very pro-Russian as well as Hungary:

“The sanctions policy pursued by the West … causes more harm to us than to Russia,” Hungarian Prime Minister Viktor Orbán said. “In politics, this is called shooting oneself in the foot.” Then-Lithuanian Foreign Minister Linas Linkevičius responded by saying it was better to shoot yourself in the foot than to let yourself be shot in the head. The message was clear: If Putin was allowed to get away with Crimea, he would go on with his wars of expansion.

Now that we all know what Putin is capable of, how his soldiers are performing genocide on Ukrainian people (like in Bucha), let’s really sanction Russia and not continue paying for their resources:

“Don’t do Russia policy without consulting people who know far more about Russia than you do. Don’t rely on people who have been trained as diplomats but have no real understanding of patterns of Russian behavior.”

We can’t be spending more on Russian resources than on the weapons we send to Ukraine.

Again, I encourage you to read the entire article.