It’s been almost a week since I got my new iPad and decided to work iPad-only and I’ve been enjoying the experience very much. I started with setting up my 7 cloud services which not only help me keep only the relevant stuff on my iPad but also sync beautifully with both my iPhone and my Mac. Today I finished compiling the #12 issue of the Productive! Magazine entirely on the iPad and wrote several articles so I’ll focus on how the iPad works as a writer’s machine. 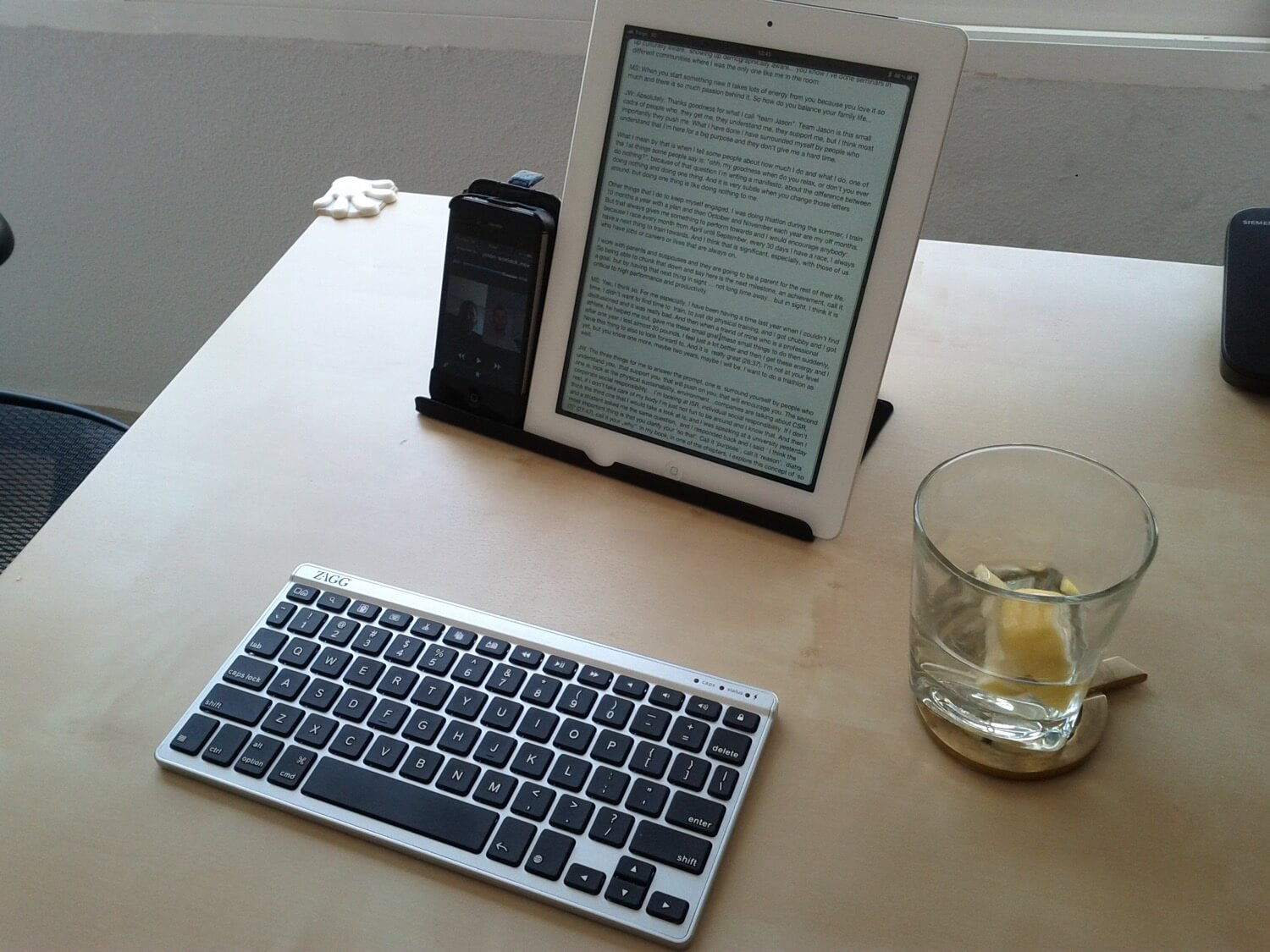 Most of the time I type using the on-screen keyboard and funny enough it works pretty well. I can “almost” touch-type which is actually surprising. I can type pretty fast on this thing.

However, for some serious typing (like this blog post) I tend to use an external Bluetooth keyboard for two reasons:

1) I can really touch type and don’t think about it at all
2) I can see the entire screen and actually use the iPad in the portrait mode which is simply designed for typing.

My keyboard of choice is the ZaggKeys Flex keyboard and it’s amazing. I believe it’s the lightest and the smallest Bluetooth keyboard out there and it has an amazingly cool “keyboard cover” which serves as an iPad stand. Brilliant and very useful.

Up on the picture you can see me reviewing the interview I did with Jason Womack - and both my iPad and my iPhone are supported by the Zagg’s stand.

The other cool thing about the keyboard is that it doesn’t change my iPad into a “netbook” just like other “folios” or “covers” do. I still prefer to have “just the iPad with smart-cover” and use the keyboard occasionally. 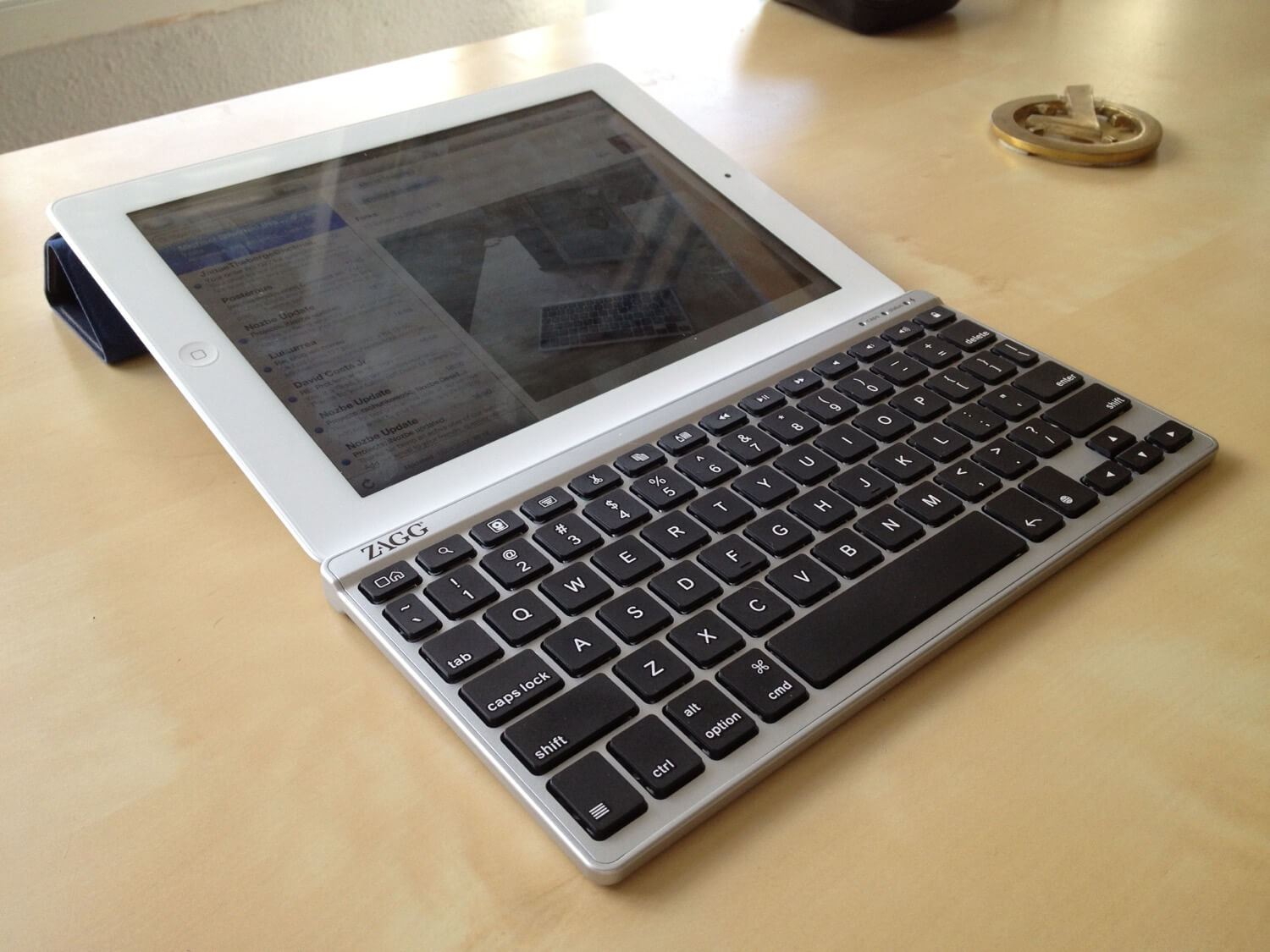 When I check emails and process them to zero, I actually like to have my iPad flat on the table to “touch” the emails with less effort and have the keyboard handy in case I need to fire up a quick reply. Although very often I process to zero and write short replies with just the on-screen keyboard.

Writer’s apps and the cloud.

Just like I mentioned in my last post most of my writing is done in Simplenote and stored in its cloud there. Simplenote is an elegant writer as such. However sometimes I need to write “richer” articles and this post I’m writing in “Markdown” so I decided to use a different setup.

1) I set up Nebulous and AI Writer to use Dropbox and have a folder there called “MarkedTexts” where I save Markdown-powered text files.
2) I like to write in AI Writer ‘cos it’s more elegant than Nebulous and has the “focus-mode” which I love.
3) Later for final editing I switch to Nebulous because it also has a preview of Markdown.
4) Once the post is ready I quickly paste it to Pages to catch the spelling mistakes. Once that’s done, the article is saved in Nebulous again (in Dropbox). From there I “email” the article to Posterous.
5) That’s it. I’ve been typing it on my Zagg Keyboard having the iPad in horizontal position. Sweet.

As a bonus I paste all of my articles to Simplenote to be able to access them quickly with Simplenote’s ultra-fast search.

I’m currently exploring some ideas for books and have drafts for three books in Scrivener on my Mac. Thanks to suggestions from Augusto Pinaud I’ve managed to sync my Scrivener drafts with Dropbox and Nebulous to be able to edit them on the go with my iPad.

I’d say that after a few experiments iPad can be a pretty powerful writer’s machine. It’s focused interface, relatively big screen and full-screen apps… together with a good keyboard make it a very light and very portable writer’s studio. Here’s to me finishing at least one of the drafts and finally shipping my first ever full-blown book to you :-)

Have you ever tried writing on the iPad? What’s your setup?

P.S. Here’s one of the guys who wrote an entire book on the iPad without an external keyboard: