I bought my first pair of FiveFingers shoes (feet gloves?) a little over four years ago. Yes, they were weird at first but after some getting used to, I fell in love with the comfort of walking almost barefoot. Today I’m running in FiveFingers almost exclusively. Earlier this year I read about a study where researchers supposedly managed to prove that these shoes were injury-prone. Moreover Vibram, the company behind these shoes settled a class-action lawsuit and agreed to refund customers their money. I don’t want a refund. I just bought a new pair. Here’s why: 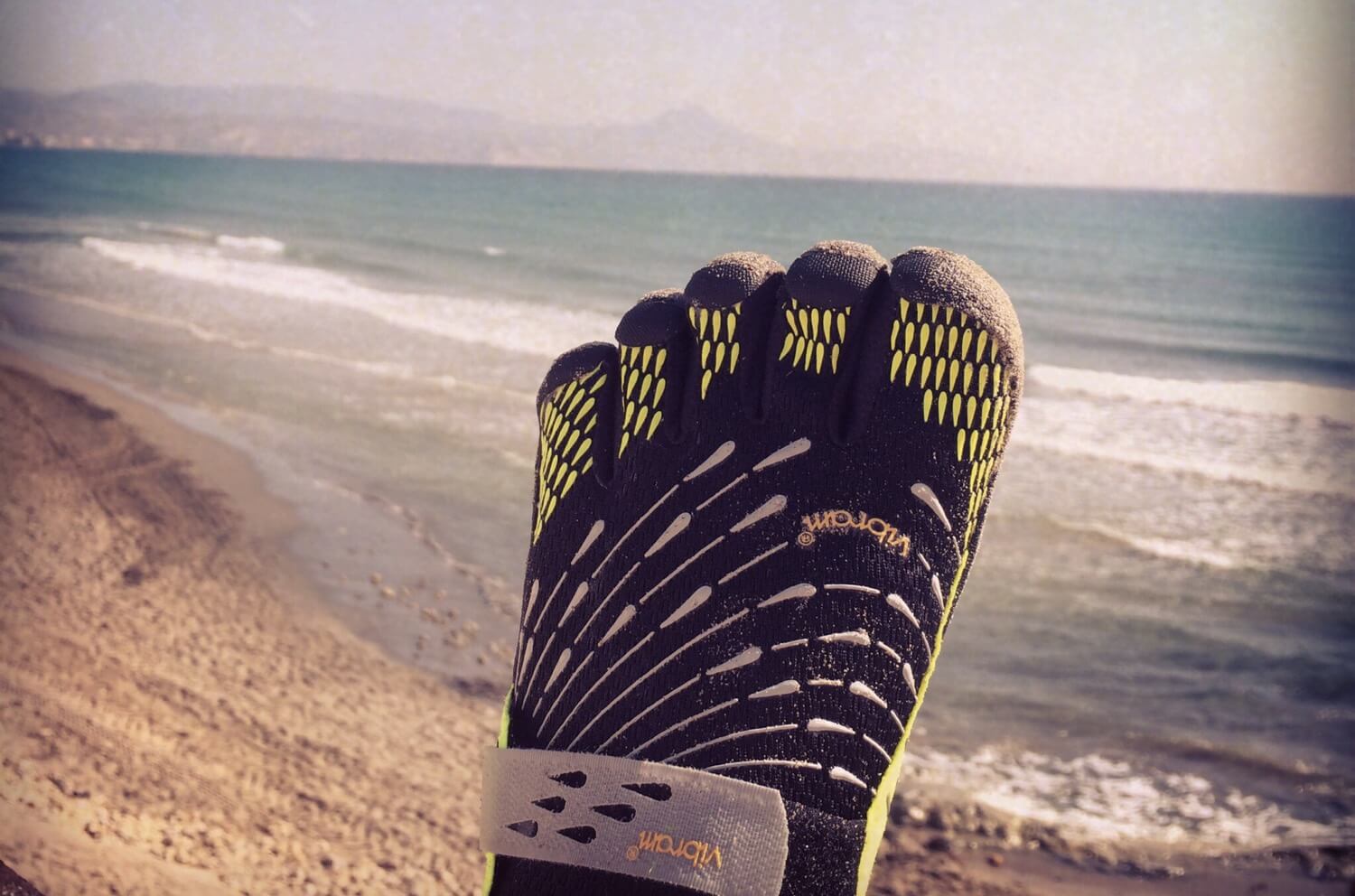 Before and after my knee injury…

I didn’t run much in my first FiveFingers shoes (“Classic” model), I only started running seriously “barefoot style” when I got the “Bikila LS” model. I began running regularly mid 2012 and until mid 2013 picked up the pace to ~5.30min/km at 10km distances… mostly running on the beach (soft surface). Then my friend invited me for a longer 15km run on a pavement. I was afraid in the FiveFingers shoes I wouldn’t get enough cushion or support so I chose to run with my friend in “traditional” Nike shoes. Boy did I make a mistake. We ran a half-marathon. At km 17 my knee started hurting me… but I finished my run… only to discover I seriously injured my knee.

As I explained in my last post about the “Born to Run” book, my doctor later told me I wasn’t built for running. Well, I dismissed his advice, got back to running and now I’ve just ran my first 10km run below the 50min time. In FiveFingers again (this time the newest “SeeYa” model). However, what I discovered was that running in FiveFingers is not as straightforward as you might think. It’s all about “how” you run:

I was surprised that after curing my injury and getting back to running in FiveFingers I never had a knee problem again. I talked to the friend I ran the half-marathon with and he told me that my problem might have been with a heel strike when wearing the Nike shoes.

I realized that in FiveFingers it’s hard to land on the heel, because there is no cushion there. When you run barefoot your body gets all the shock from each step of your run. The shoe doesn’t compensate (unlike traditional running shoes). This meant, I was used to running on my forefoot when in FiveFingers (my body didn’t want to suffer) but the moment I put on the Nike shoes, I went back to more comfortable “heel strike” because I didn’t feel the pain of it. And heel strike causes knee injuries.

Again, reading “Born to Run” book only confirmed my assessment. With all the innovation and cushion in the modern running shoes, not only is the injury rate not declining among runners. It’s actually on the rise. Just read this short excerpt from the “Born to Run” book.

Since my knee injury I also started studying a new running method called “chi-running” which promotes a correct running position where gravity moves us forward and encourages forefoot landing. I’m still getting used to the new posture but I find I’m running faster and with less effort than before. I just had my first sub-50min 10km run so I must be doing something right…

FiveFingers - are they good for me? You?

Now getting back to the study that FiveFingers are more injury prone than normal running shoes and that Vibram, the company behind it was making false claims regarding health and fitness.

On one hand, if you give FiveFingers shoes to a runner who’s used to heel strike and who’ll continue running regularly in their “old ways” in normal shoes, of course they’ll get injured. Here’s what they should do:

First. Learn chi-running - every runner who wants to really learn to run properly, needs to get acquainted with this technique. It promotes proper posture, good forefoot landing and will definitely increase your speed and decrease the risk of injury. My close friend TesTeq swears by this and thanks to him, I’m a convert.

Second. Give FiveFingers a try - give them a try. Start slowly. Run 1-2 km first. Take a day off. Repeat. Rest. Increase distance gradually. Running barefoot is a totally different experience - some muscles that used to be dormant because of the running shoe, are now in motion. They need time to develop and strengthen. Take it easy.

Side-note: it’s tricky to find your size of FiveFingers. My usual shoe size is 41 and I have size 40 of my FiveFingers and they fit perfectly but I strongly advise to try them first in a local shop if you can.

Third. Enjoy the barefoot experience - I ran my first triathlon in FiveFingers. I’m running in them every other day. On the soft sands of my local beach… and on hard concrete of the boulevard close to my home. The surface doesn’t matter (although I do prefer the beach) as long as you’re running correctly. And I assure you, FiveFingers literally make you run better.

Do I have any scientific evidence for my FiveFingers experience?

Nope. I don’t need one. After my knee injury I’m clocking more kilometers than ever before (did 80km in April, 60km in May and 80km in June…) in my FiveFingers, have had no injuries whatsoever and my legs are strong and healthy. So much for a guy who was not supposed to be running in the first place.

Moreover, I gave my old FiveFingers Classics to my friend so she could give them a try. She’s been suffering from knee problems for a long time now. With the new “shoes” she’s going on long walks and even jogs from time to time… and feels great.

It’s up to you. I love running “barefoot”.

Your mileage may vary but I feel more in touch with the nature when I’m running in FiveFingers. I’m not a pro. I’m just a guy who runs 2-3 times a week, 10km on average. I’m not even a marathon runner. But yes, this October I’m going to do my first olympic triathlon (1.5km swim, 40km bike, 10km run) and a local half-marathon. Both races in my FiveFingers. Wish me luck!

Question: Have you ever tried FiveFingers? Chi-running? Do you run regularly, if so, how?