When I wrote about my iPad Home Screen I mentioned that one of the new apps for 2021 on my dock was an app that wasn’t even released yet on the App Store - Curlicues by the Danish programmer Simon Støvring, the maker of Scriptable. Simon was gracious enough to give me access to the TestFlight version of his app and I promised to give it a spin. Instead of writing him a long email, I decided to write a full review on my blog. Yes, the app is that good. It stays on my iPad Pro dock.

Even though there are countless note-taking apps for the iPad and the core Apple Pencil experience is already baked into the system, I was still missing an app like this one. An app for loose notes.

No notebook, folder or notes management. No unnecessary administration. I can just jot down something, then something else, then something completely unrelated next to it. I forgot how much I needed a tool like this. How much I loved taking written notes.

Before this app I tried and used Cocepts app and it was really good. Too good in fact. Too advanced for me. Too many brushes, colors, features… I wanted a simple drawing app with limitless canvas and this is what I got in Curlicues.

This app has 7 spaces to write, each of them marked with different color. Each of them with infinite canvas. This way I can organize stuff a little bit, but not too much. I have one space for loose notes, one for thoughts on the current big project I’m working on, one for this app’s feedback, one for some personal notes. I’m not even using all seven spaces. I don’t need to.

The cool thing is that the app remembers which colors of brushes I was using in each particular space, so it makes coming back to a note very easy.

The app is not creating any custom brushes or color schemes. I have the same tools here as I have in the Apple’s Notes app. Which is great. Simple, effective and really easy to use. And for my note taking I don’t need any specialized brushes. I even have a ruler, eraser and the object selection tool. More than I need. Perfect.

Moving around the canvas is easy with one finger. Swipe to move when you’re holding the pencil and that’s it.

The cool thing about the app is the zoom. I can zoom out of my note to four times the size (from 25 to 100%) and zoom back in. This way I can see my note from kind of a bird’s eye view and see how big it’s grown and dive in to add a note wherever I feel like.

Another great choice by Simon was to support all the standard iPad behaviors for the app. You can have it with any other app side by side. Which is particularly useful when you want to go through your notes and write an article based on them. Here’s me writing a script for a future Nozbe webinar while going through my scribbles: 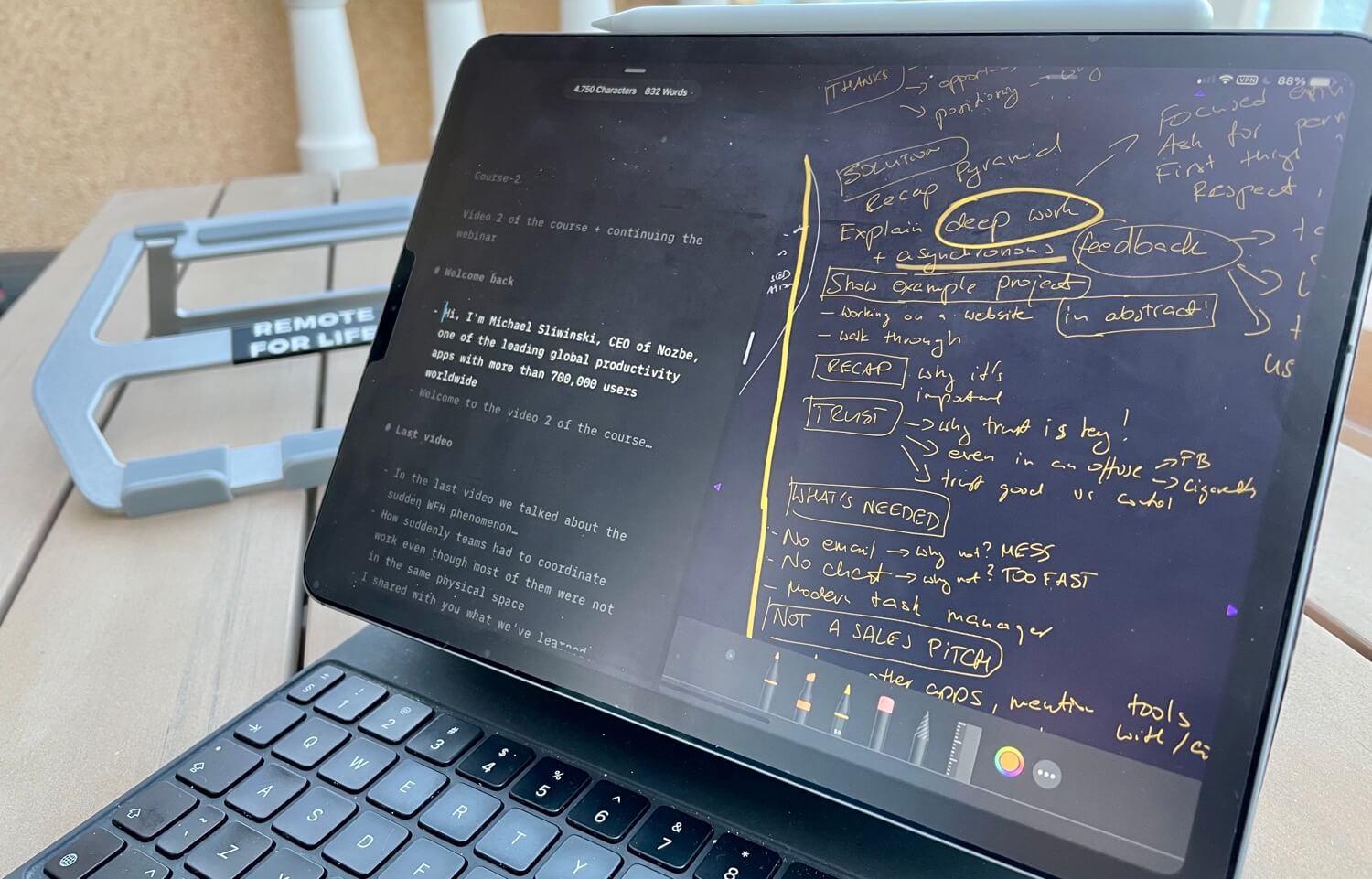 You can also use it in slide-over mode which is very useful in meetings. Here’s me having a Zoom meeting, a document in Dropbox Paper open and the sketchbook in slide-over view which I can pull up whenever I want to jot anything down: 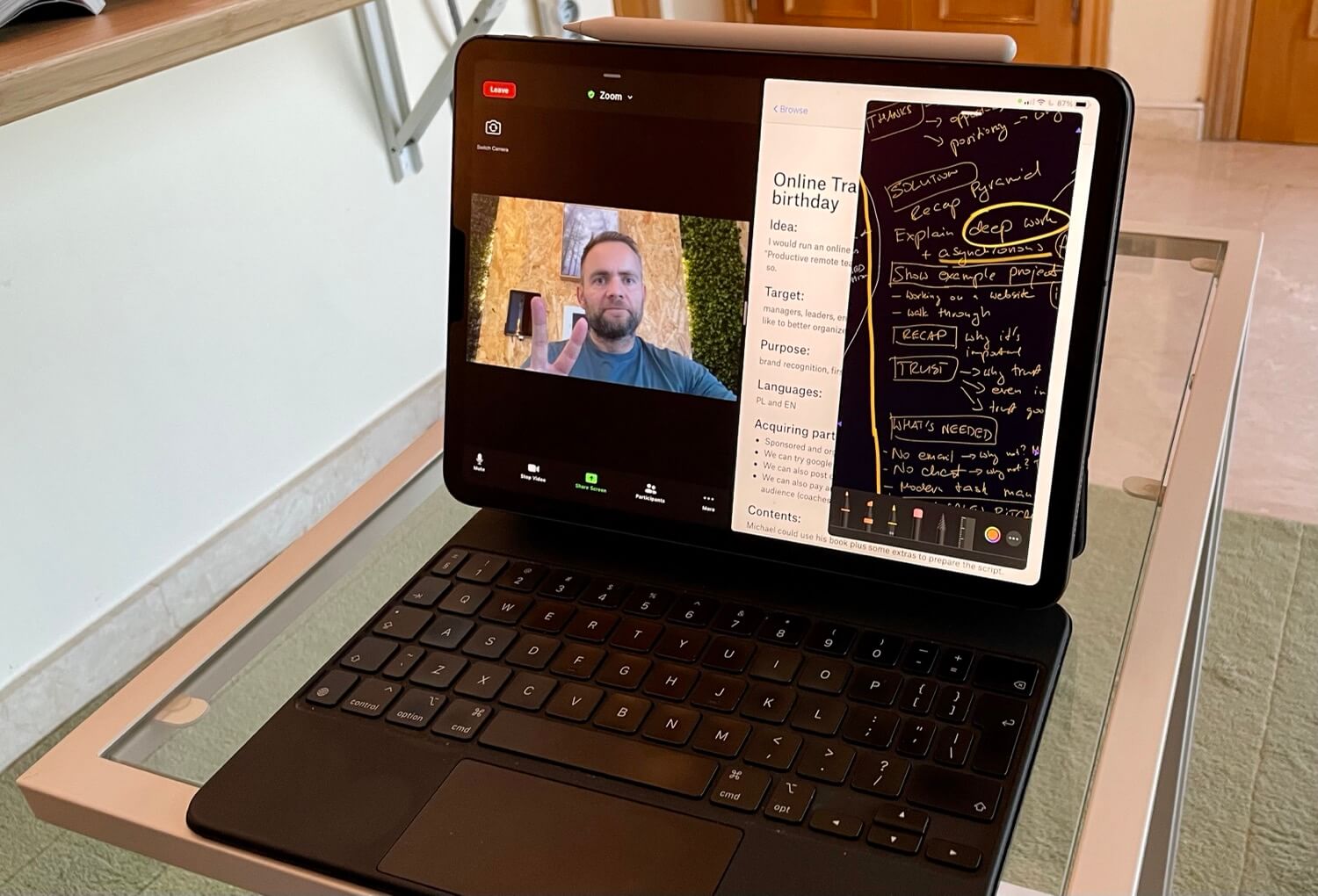 Feature requests for the future?

I love the app as is and even if it doesn’t change much after it’s shipped, I’ll be happily using it. However if Simon needed some ideas for future versions, here are some loose nice-to-haves:

Over the month I’ve been testing it I haven’t come up with anything major, just two things:

Other than that, the app has worked flawlessly for me.

I’m so happy Simon built this app and shared it with me. Now I’m hoping he’ll release it for other iPad users and that other note takers will enjoy it as much as I do:

Simon, the app is definitely “good enough” to be released to the world. Ship it! 🛳

P.S. Just because I started note-taking so much now since I’ve installed this app, I also decided to re-apply the Paperlike screen protector on it so that I can write with the Apple Pencil better! 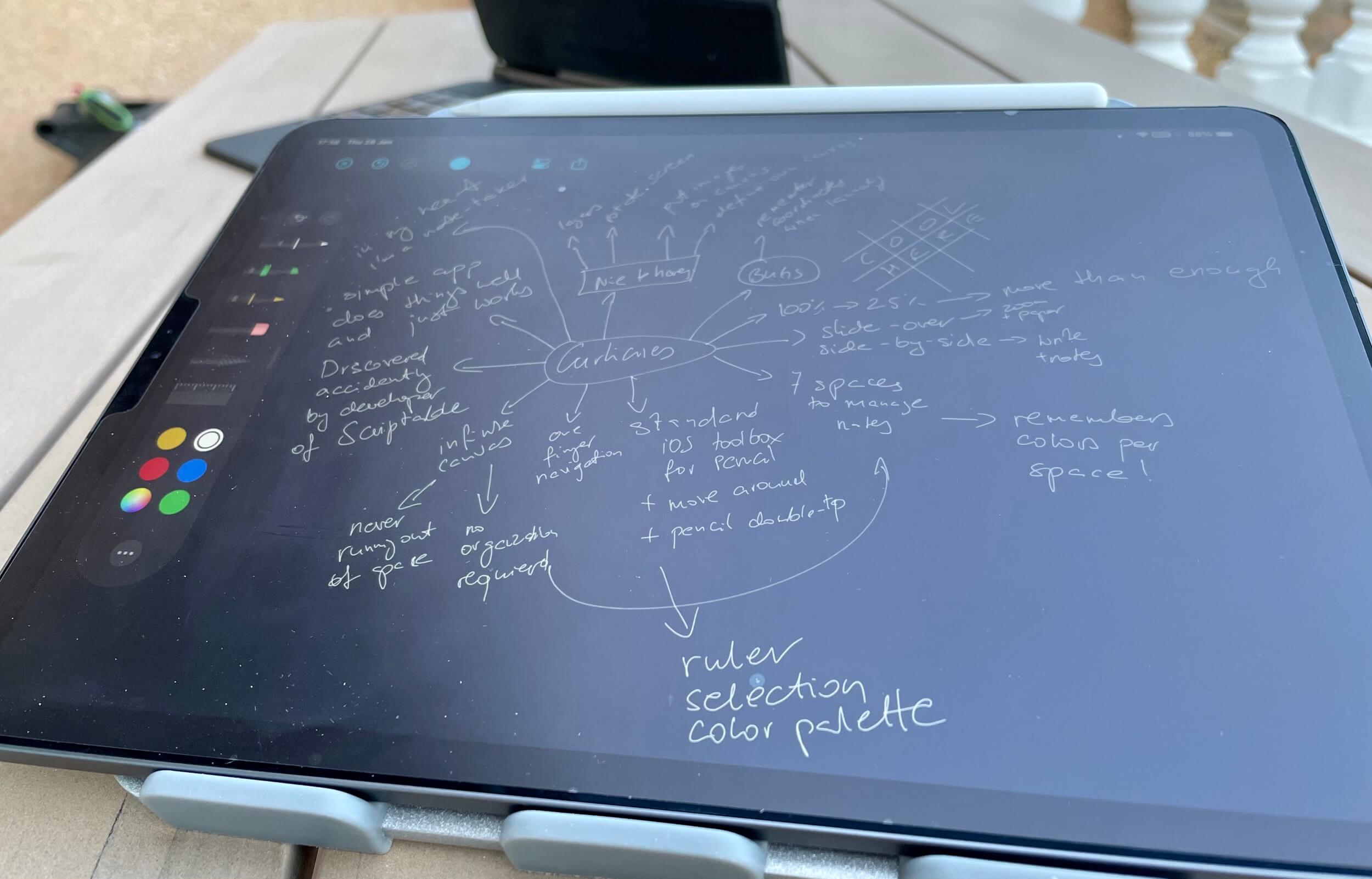