This is a story of a small Windows application I made back in college (in 2000-2002). Back then I was a Windows user and I wrote this application to help me launch programs/files/bookmarks faster on my computer. I gave it away for free and I reached a total of around 100,000 downloads of the app, I think. It was my first “major” and “global” success. It wasn’t a business success, but I learned a lot building and distributing it. In this post I’d like to share QTbar’s story. You’ll also find links to download the app, if you dare want to try it. Here goes: 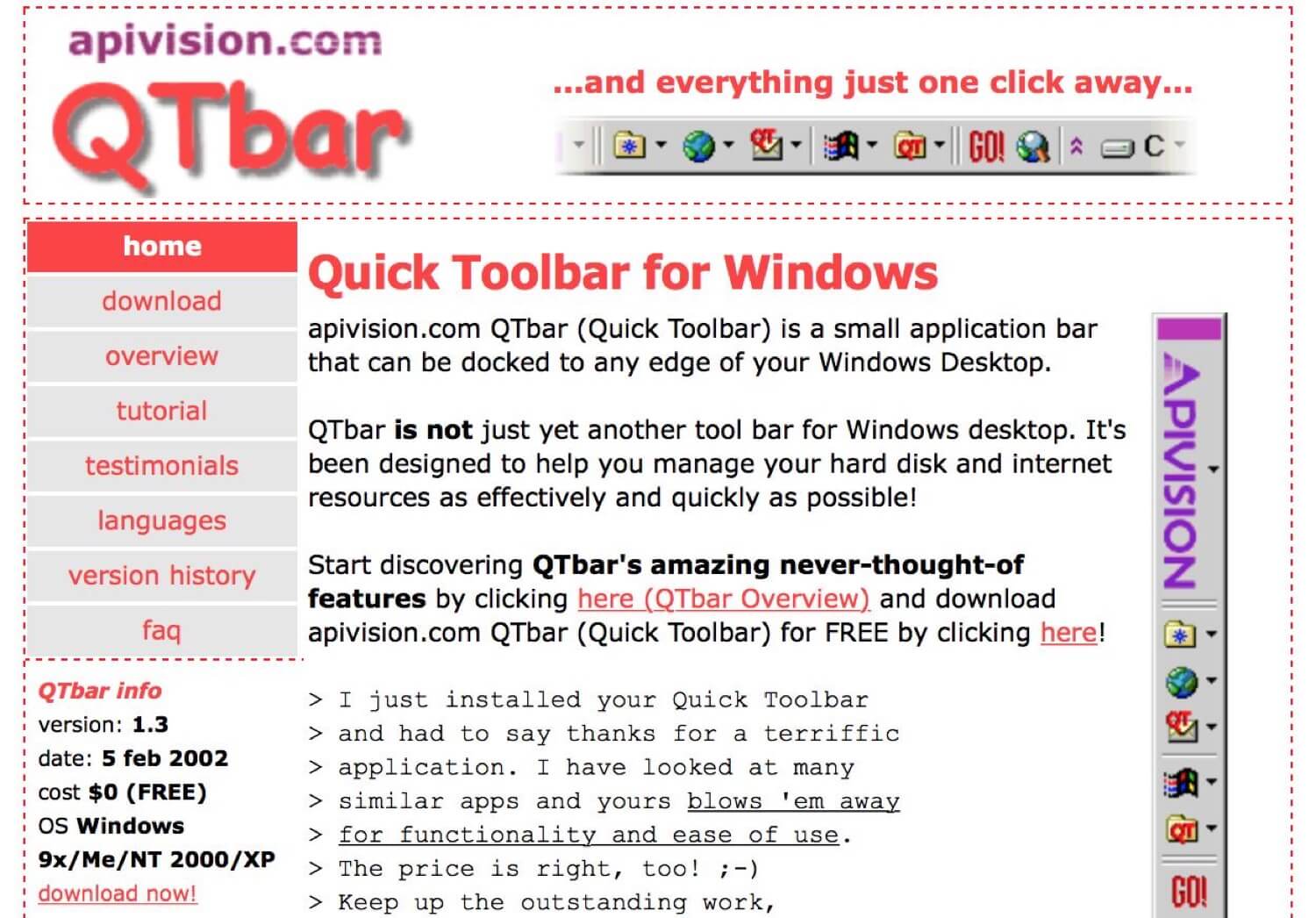 I didn’t like it, that in Windows getting to files, links and apps was so difficult. Unless you dumped everything on the desktop. That’s why I built this app. So I could quickly visit my favorite web sites, open files on my hard drive and launch my most-used programs. At that time I was really happy with Borland Delphi programming environment. I was using Turbo Pascal which I knew from high school and was applying visual objects from Windows on top of it. It was like building LEGO in a computer. And I love Lego.

As my application was really a tool bar, I called it Quick Tool bar and got the QTbar.com domain. I didn’t know if anyone would use the software, so I decided to give it away for free (freeware) and this is how my adventure started. In this post you’ll learn all about it from the beginning to the end:

Just a shortcut to your most used items

The program was very useful. It was a very cool shortcut bar to your most used things - and you could dock it to any side of the screen on Windows:

I remember I spent sleepless nights coding the program, updating it, doing customer support… it was lots of fun.

I always knew localizing the app was crucial so I eventually released 9 language versions of QTbar, translated by me, my friends and my app’s fans. Links below are active download links to the app - it was designed for Windows 95/98/2000/XP:

Praise from some major publications

Back in the day, Tucows was a place to be, and my app got awarded 4/5 cows which was like a silver medal for a Windows application. I was so proud!

I remember when Nonags directory of programs featured QTbar I thought my servers would break down. I got 6/6 stars there!

Anyway, I got praise from many places and from my users. I was really happy that my idea resonated with so many people. Eventually I counted more than 100,000 downloads of my free little app.

My 2K idea for a business model

When you download the app, you’ll see a pretty large logo of my “company”: “Apivision”. It was there for a reason. I wanted my app to stay free but I wanted to sell it to some major Dotcom startups as a freebie they could give away to their users. I would charge them licensing fees and they’d give it away to their users as a value-added product.

Well, the dotcom era was gone quicker than I expected and nobody paid my licensing fees. I didn’t earn a dime, but I earned lots of valuable lessons. I was really happy with the traction I got. And most of all, that an idea to “scratch my own itch” resonated with so many people. 5 years after I’d published the last version of QTbar (version 1.3 in February 2002), I launched my current business: Nozbe, which was based on the same idea - build something I’d want and showing it to the world to see if other people wanted it. 8 years later I know I’m on to something.

Suffice to say, I learned a lot from my QTbar experience and I’m happy I built it and had the guts to share it with the world. This paved my way to doing what I’m doing now, which is running Nozbe and loving it.

Question: Any pet project you did in college you’re proud of?