I started Productive! Magazine back in the Autumn of 2008 with the first issue with David Allen. Why did I do it? I was close to celebrating my 2 years of running Nozbe and wanted to contribute something more than just a great time and project management tool to the community. I wanted to also inspire my Nozbe users. I wanted to inspire everyone around me and myself to be better, be more productive and live a happier life. This is what the magazine is standing for. 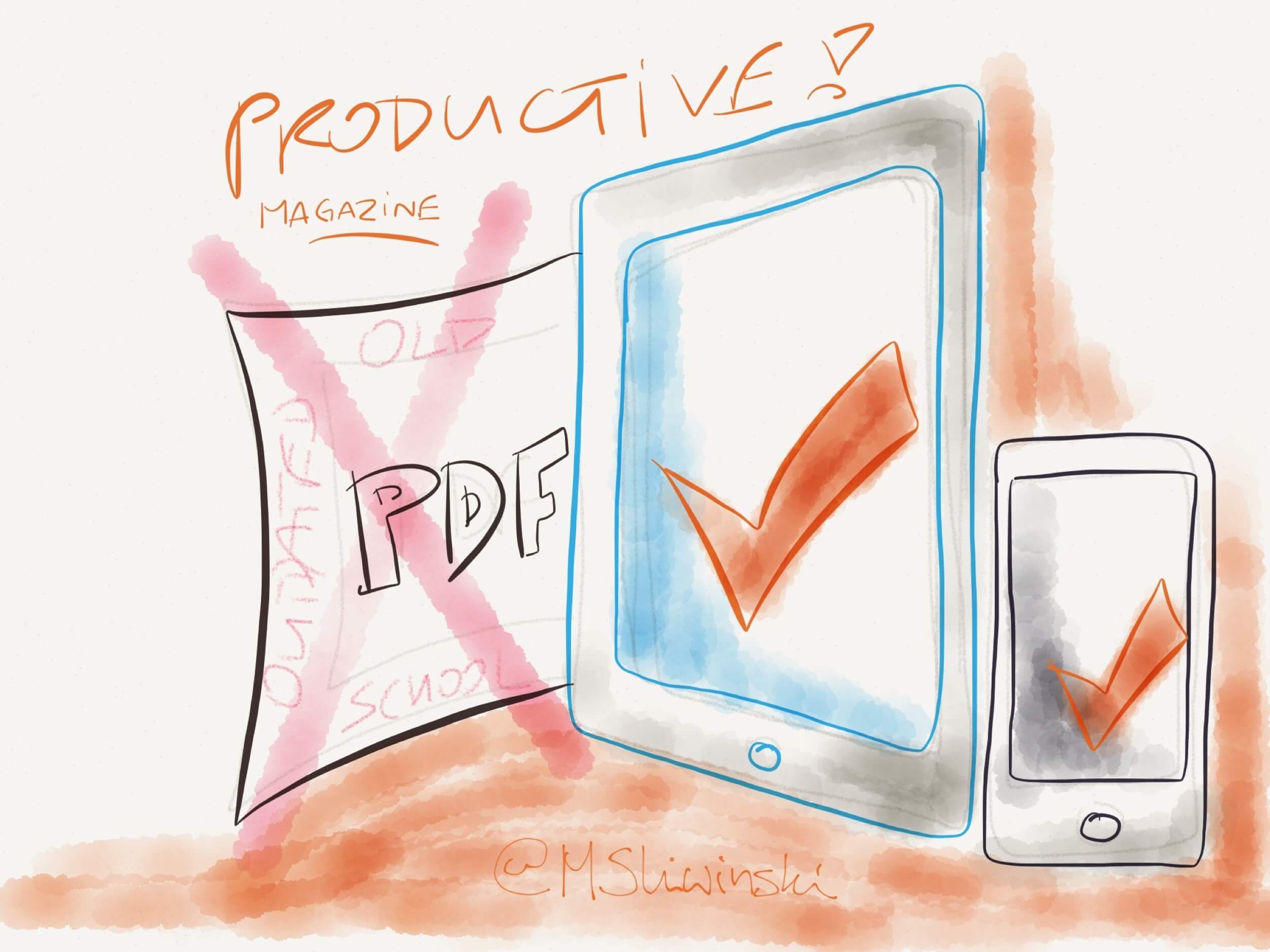 I love doing the magazine. I get to hang out with great people like David, Seth, Jason and others and I get to connect with fantastic contributors - all ueber-productive people. However, my day job is to run Nozbe and as a CEO of a growing company in a very competitive environment I don’t get to have as much time as I’d want for the magazine… and that’s why it took me 5 years to create 14 issues… and this year there was none. Until now. I decided to re-launch it and make it bigger, better and more regular. And different… and still free. Here’s why:

I still love doing the magazine

Every week I get emails, tweets or messages via LinkedIn, Facebook or other mediums from people saying how they love the magazine. People like the content, interviews and they really need the inspiration to get better and more organized. I love doing the interviews, I love being in touch with our contributors, I love all that and didn’t want to give it up. That’s why this year I decided to finally do something about it and invest more into the venture:

With each issue of the magazine I saw the PDF downloads decline and iPad magazine downloads increase. I read more about it and studied my habits and knew that going mobile-friendlier is going to be the key. And then The Magazine launched and I realized that I want this kind of mobile-friendly magazine. Something that can be read on the iPad, iPhone and an Android phone… and where each issue download is not 80MB but something around 5MB. So I teamed up with a very talented developer Radek P. and got my Nozbe designer involved (another Radek) and my CTO (Tomasz) and together we created a beautiful magazine app. You’ll love it. We just submitted it to the AppStore for review…

The app will initially be available on iOS and with version 1.1 it’ll also show up on the Android platform - scheduled for November.

2. Issue 15 with Marten Mickos and beyond

To help me contact the contributors and make the magazine a reality I hired a very talented executive editor - Magda - and her focus is to bring you a new issue of the Productive! Magazine every month. She’ll coordinate the contributors, interviews (which I’ll still be doing) and everything else. She also did an amazing job with Radek P. of porting all the past issues of the magazine to the new app. As most of the articles and interviews in the magazine are timeless, you’ll enjoy reading them now even more!

As you can see on our updated Nozbe about page, I’m dead serious about Productive! Magazine’s future as I built an entire team around it. With each issue we’ll want to bring you really fantastic, timeless content. Magda and the team will make sure you’ll love it.

(We also have a great team of proof-readers with Lori, Emily and James - kudos to you guys!)

Issue 15 is ready (and will show up a few days after the app) and we’re working on issue 16 already.

To have a sneak peek at what we’re up to, you can already visit our redesigned ProductiveMag.com site.

In the future we’ll want to introduce the magazine to our international readers by preparing local versions with articles from local contributors. Productive! Magazine in Japanese is scheduled for December this year. The next countries will follow next year.

4. Want to help out and contribute?

The magazine doesn’t accept sponsored articles or ads. The only “sponsored piece” comes from Nozbe as my company is paying all the bills. The rest of the articles are timeless articles by our contributors and interviews. Under each article there is a bio of each contributor with links to their sites and social media.

If you’re writing about productivity and want to send your message across to more than 10K active magazine readers, don’t be a stranger and get in touch with Magda - our executive editor.

I think you’ll love the result. Stay tuned - our Productive! Magazine app 2.0 will show up on your iPad and iPhone anytime soon and I’ll announce it on this blog as soon as it’s up on the App Store.

From now on, the magazine will be available as an app and not as a PDF but it’s a switch that’s necessary for today’s world. This will make reading the magazine a pleasure to you - our readers - and hopefully the articles will inspire you to be more productive, organized… and just support you in taming your everyday chaos. Stay tuned!

Question: Which articles did you like in the past issues of the magazine? What are your expectations for the new magazine? Do you read more on your iPad, or iPhone? Which Android device do you use?