I just wrote my first book with my friend, Augusto Pinaud. It’s called “#iPadOnly - how to only use your iPad to work, play and do everything in between” and it’s going to hit virtual bookshelves in a little over a week. This post is a quick summary of how the book came to be, how we both wrote it (living on different continents) and why we had so much fun in the process. Here we go! 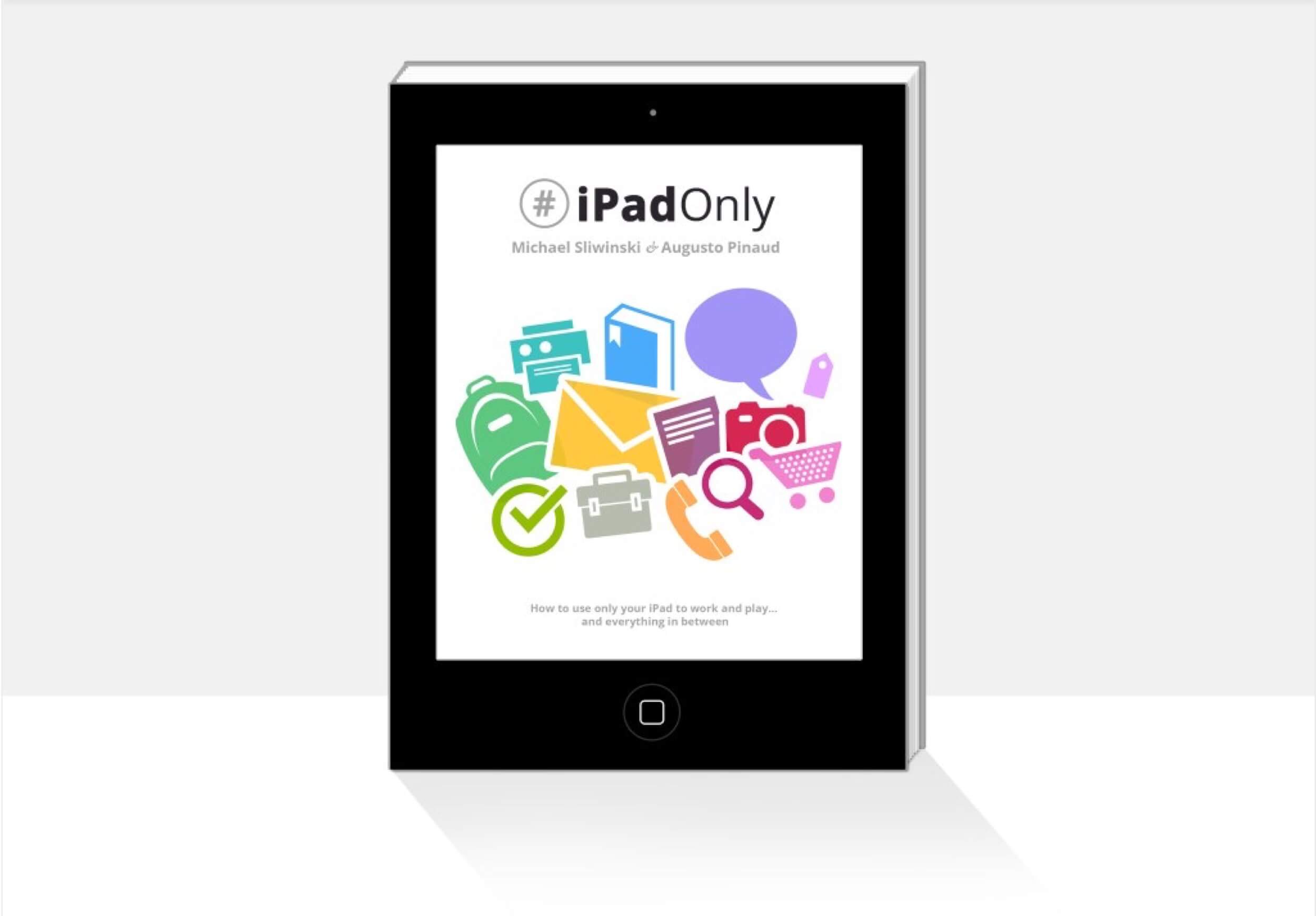 I wrote a few blog posts on #iPadOnly

It all started when I decided to use my iPad as my main computer last April and blogged about it - I liked the process so much that I started blogging more and over the last year wrote ~20 blog posts on the topic. I thought this topic deserved a book. A first post-PC book that will show everyone that yes, you can use only your iPad to work and yes, after a few annoyances that come with a migration, you’ll love it as much as I still do.

However, I knew I wouldn’t be able to write the book myself. I have a successful company to run and don’t have the time to write books, right? Then I saw the series of blog posts from Augusto on the same #iPadOnly topic. After a little thinking (like, 5 minutes) and a little analysis I realized that:

Well, after another 5 minutes I fired up an email his way that went like this:

“Hello Augusto, I’m not sure if you already realize this, but we’re writing an #iPadOnly book togheter. What do you think?”

And he said yes. We got together on FaceTime and nailed the details and the rest, as they say, is history. Here’s how we wrote this book:

1. The communication and weekly reviews

I live in Europe and Augusto in the USA. We “met” on FaceTime and we decided to do regular, GTD-style weekly reviews together every Friday at 6 am EST (he’s the author of the “4am Productivity book”, so for him 6 am is not a big deal :-)

I convinced Augusto to use Nozbe and share and “#iPadOnly” project together there (and as OmniFocus has no collaboration built-in, Augusto didn’t oppose).

We sometimes used email (very rarely) and mostly iMessage to send messages with both the iPhones and the iPads.

We almost always talked via FaceTime… sometimes Skype voice when one of us was on a move with a 3G connection.

2. We wrote in Byword using a shared folder in Dropbox

Augusto came up with the first outline of the book and we decided to fill it up. Initially we tried to use Google Docs - actually Google Drive app on the iPad to write as it allows real-time collaboration… but the app is slow, clunky and just feels wrong for writing.

We’d write in Byword and copy and paste text to Google Drive. After a week we moved everything to Dropbox. To make sure nobody would override each other’s files, we’d just write in different files about the same topic. Later we glued the text together and started editing.

3. Editing with Nozbe and Byword

For editing we wanted to go back to Google Docs again, to be able to edit the same files in real time… after 2 days we realized our mistake and went back to simple text files in Dropbox.

We’d set up tasks in Nozbe - if someone was editing chapter one, they’d add a task to Nozbe and comment on their progress there. Once the task was done, the chapter was “free” for the other person to dive in.

The editing part was really tough. Augusto had the first run and I had the second and even though each of us did a great job, there was still a lot to edit but now we believe the book “flows well” :-)

Now the book is with Lori, my Productive! Magazine editor as she’s the only native English-speaking person in the bunch and she’s doing the real heavy-lifting editing. That’s why the book will be available in a bit… almost there :-)

4. Having a co-author rocks

I would never have written this book alone. I even didn’t know I had an entire #iPadOnly book in me. We’ve got 50,000 words so yes, we wrote a full-blown book on this subject, and we think you’ll love it. We say it’s the first ever post-PC book as it really shows you can use the iPad as your only and the main machine.

Thanks to co-writing it we motivated each other, kept each other going, and pushed each other to greatness. We really felt we were doing this together and we believe we’ve got a better book because we co-wrote it.

We usually spoke English to each other… but when we were stressed, we’d switch to Spanish sometimes… Augusto felt more “relaxed” then :-)

5. Writing a book is hard

I had to wake up earlier to write, I had to make sure I had something to show at our weekly Friday Weekly Review meeting… and this was a very busy time for me at Nozbe… so it was hard… but I think it was worth it. Tomasz and Delfina and the rest of my Nozbe team did a great job supporting me with writing the book and helping me run the company at the same time.

We think you’ll love it. It’s full with practical advice, our experiences and the whole definition of the #iPadOnly concept and new paradigm shift we’re experiencing nowadays with the whole “mobile first” movement.

We work on our iPads. You’ll learn how we do it, how you can do it, how anyone can do it. Just have a look at the table of contents :-)

So there it is. I wrote my first book. Feels great. Check it out.

Question: Have you tried working mainly on your iPad? What has been your experience so far?