In my iPad-only series I highlighted time and time over that one of the main apps I use (besides Nozbe) is Evernote. This is true - I love this app (and Nozbe syncs with it because of a this love) and I can confirm what they say is true: “Evernote should be your extended brain”. Here’s why: 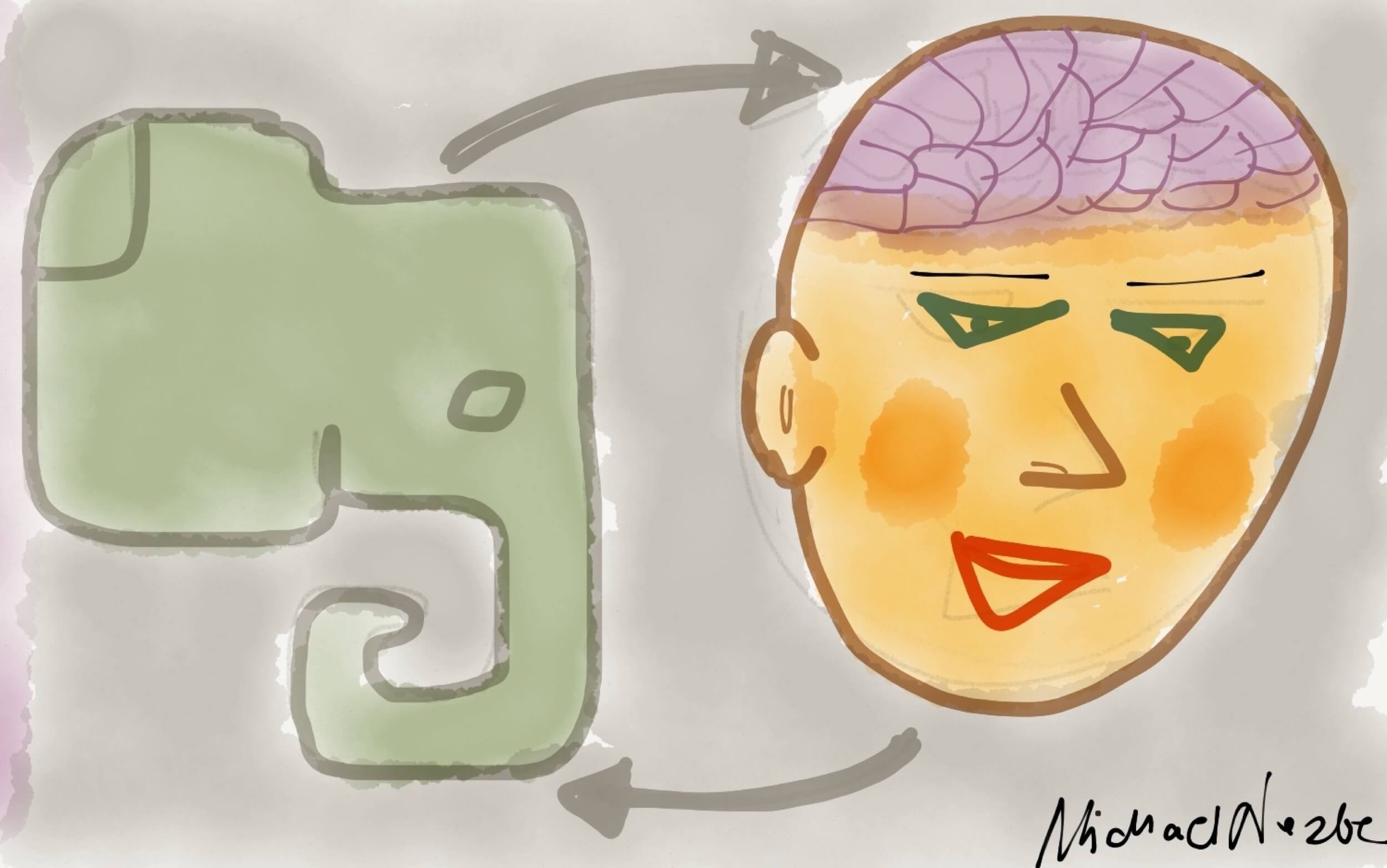 Well, I do create files because the world seems to still like them and I have to use Dropbox to sync the files… but I don’t generate as many files as I used to. Instead, I create “Evernotes”, meaning, I create notes in Evernote.

The beauty of Evernote is that the size of things I store there is limitless and I can access my data not only on all of my Macs but also on my iPhone and (yay!) iPad.

Whenever I need to prepare a spec for my great Nozbe developers, need to put a mental note for myself, need to comment on some design or some inspiration I got… anyway, need to make a note - I create a new note in Evernote. The cool thing is that notes there are “rich” meaning I can mix text and images.

So where I used to create “Word documents” I now just write in Evernote. The images I put there between the text are usually “Skitched” screen captures - meaning I use an app called Skitch on my Mac and iPad to annotate on a screenshot (add arrows and stuff) and paste it later to the note.

When I want to share these notes with my team, I either send it to them directly from Evernote or print to PDF and mail them like this. The original note always stays in Evernote.

Now that I’m working a lot more on my iPad I use Skitch for iPad and Evernote here as well. I store my all handwritten notes in one Evernote Notebook called “AllNotes” and that I’m an Evernote premium user (costs only $45 per year) I marked this notebook at an “offline” notebook so I have access to it on my iPad even when I’m on a plane without an Internet connection.

2. I scan business cards to Evernote

I have special Notebooks: “Contacts” and “ContactsJP” (for my Japanese friends) where I scan all the business cards. Here’s a video showing you how I do it.

3. I scan documents to Evernote

I have a scanner on my desk which directly scans to Evernote - I put the scanned documents into their appropriate Notebooks:

Why do I scan all these things to Evernote? Because they have this OCR technology so when I want to search for a phrase that was on the scanned document or business card, Evernote most of the times will find it. Brilliant.

As mentioned above, I can share a notebook with someone which can come in handy.

4. I send travel info there and boarding passes

All the travel info, apart from going to Tripit is also going being sent to a notebook in Evernote called (you guessed it) “Travel”. This way should I fail to print something, I can always show my boarding pass to a lady at the gate on my iPad or iPhone.

Note: Evernote, as many other apps nowadays has a fantastic “email gateway” which is very useful. Now that I’m on my iPad most of the time when I process my email I just forward stuff to Evernote.

5. I clip shopping ideas there… and web pages in general

Evernote has a great clipper for the Mac on Safari and Chrome so I “clip” web sites to Evernote. When there is an item I’m thinking of buying (like a cool accessory for my iPad or something) I clip it to Evernote to my “shopping” notebook.

6. I send interesting articles to Evernote

I read blog articles with my Google Reader account on the Reeder app on my iPhone or iPad or Mac (totally recommend this app) and later I’ve set up two IFTTT actions - when I mark an article as “starred” it sends the article to my Pocket account so that I can read it calmly later and sends the URL of the article to Evernote to a special “Read” notebook - just so that I never miss it.

Once I’ve read the article in Pocket, I decide if it’s worth keeping for later and when I do want to “memorize it” then I send the entire article to Evernote to my other special notebook called “Articles”.

7. All the rest of the stuff I want to remember…

Loose thoughts, quotes, numbers, IDs, coupon codes, emails with interesting info… you name it - stuff that I’m not sure I want to keep but want to keep it “just in case” is being sent directly to my “Stuff” notebook.

8. Other drafts and writing goes to Evernote, too

I’ve also set up my Mac mini this way that when it detects I’ve added a new note to Simplenote, it gets sent directly to Evernote just in case, too (notebook: “Writing”). The same applies to my Dropbox folder where I keep blog posts and essays (just like this one) that I write using Nebulous Writer. All goes to Evernote automatically.

I have it running on my Mac mini and Macbook Air all of the time, as well as on my iPhone and iPad… and even on my Google Nexus S phone. This way I have access to my “external” brain anywhere I like.

I try not to store paper anymore. I scan and later shred all the receipts (I wish I could do that with the invoices but I need to keep them for the next 5 years), documents sent from different institutions or companies. I still keep originals which I really believe I need “on paper” but most of the stuff goes to Evernote and then straight to my shredder. Now I’m in the process of revising all of my past documents and scanning them folder by folder to reduce the amount of paper to minimum.

The magic is also in the fact that Nozbe syncs with Evernote so when I start a new project, I very often “magically” discover all the notes that are related to this project. Sweet.

How do you use Evernote? Did I miss something? Or maybe you use something different as your “external brain”?