It’s this time of the year that tech’s most popular weblog called “Techcrunch” is organizing their gala of startup awards called “Crunchies”, by some “industry experts” called the Oscars of the tech. I think it’s a great idea that folks are organizing these kind of award ceremonies - some startups will receive recognition (others like Facebook or Twitter yet again) and some CEOs will receive a nice vanity boost. I don’t have anything against these kind of initiatives. I just don’t understand why startup founders actually stress about these. They shouldn’t even care. Here’s why: 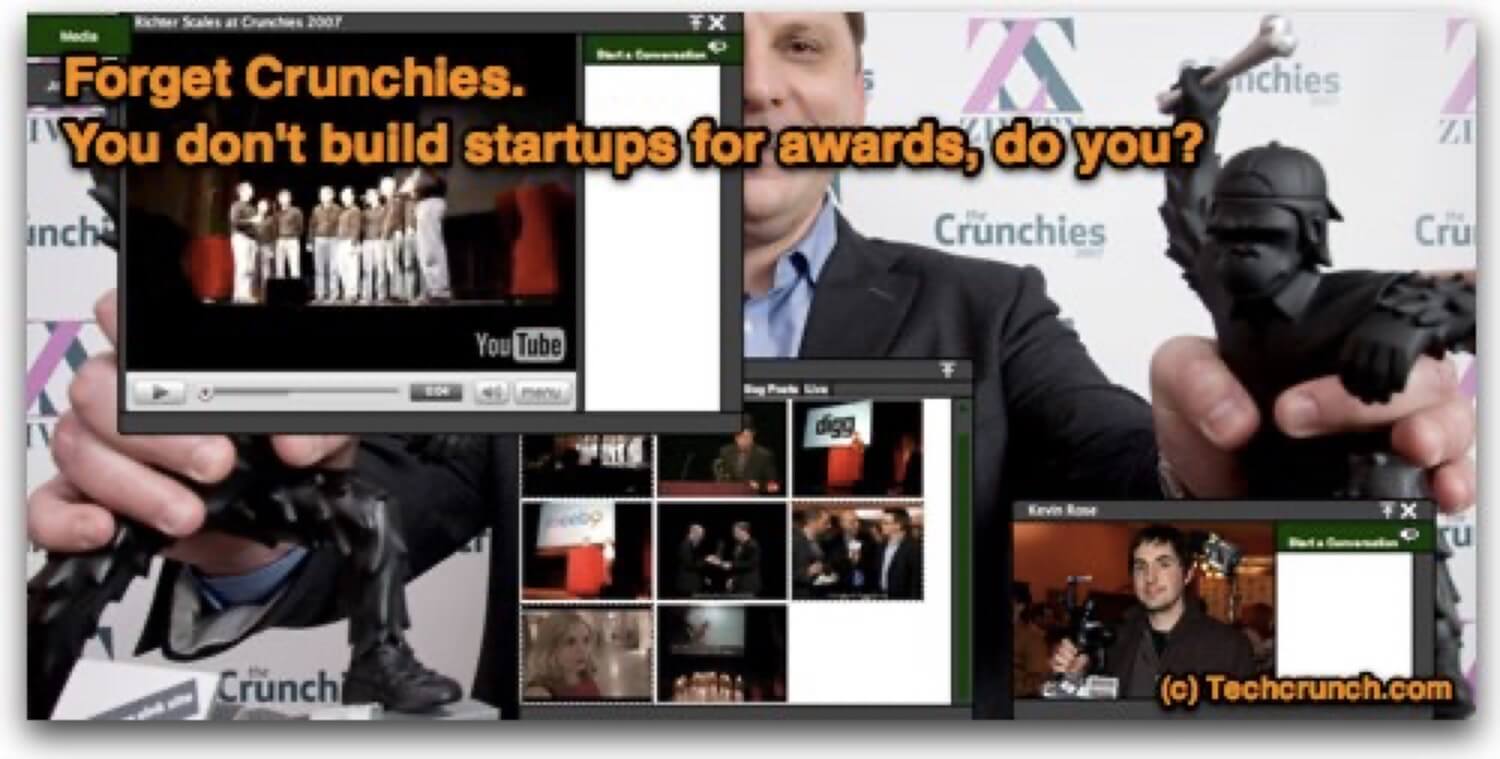 Awards are not real.

Awards are just that - awards - given by a few people who voted for your idea/startup/business and given the fact that most of the press and especially tech press is all about just a few companies like Facebook, Twitter, etc. than you even don’t have a fighting chance. Their crowd is bigger. Like 500-million bigger. So what do these awards really mean? Nothing. They don’t tell if the business that wins is really great or useful. It means there are a lot of people that voted for it. And nothing more.

Awards don’t tell if your startup business is great or not. They tell if it’s “hot or not”.

Does winning an award give you more customers? Does it bring value to your company? Nope. It may give you a little more press than usual and a little more users than usual in short term… but it doesn’t say if your business is really good. A vote for someone/something costs the voter nothing. They just decide what’s hot and vote for it. It’s free and that’s why it doesn’t mean anything. At least it shouldn’t mean anything to you.

Voting for awards costs nothing. Paying for a great service costs real money. And means a lot.

Vote for awards are like thousands of users of a free service. It means that there is a crowd that’s interested in something… but it doesn’t say about that something’s real worth. That’s why I know my web application Nozbe is worth a lot more to tens of thousands of happy people. Because they didn’t only show up on my web site and say: “Michael, your app is great”. They actually confirmed it with their hard-earned cash by paying for a Nozbe account. This award means a lot to me.

When people award you with money - they mean confidence and trust.

This is the major difference. When people become your paying customers, they vote for your startup business with their own money. And that’s not only a materialistic vote of dollars… it’s also a vote of confidence and trust. They trust you and by giving you their money they hope you’ll not fail them and make everything in your power to offer the best possible service to them. This is a special relationship that means a lot more than a “vanity boost” of an award. And it’s something I experience every day and I love it. I know my stuff works because people use it and keep paying for it. I don’t need any award to tell me that.

Here’s one of the emails that really made my day. I received it recently from one of our customers:

“I signed up for Nozbe Sunday night at 11:15pm. By 11:45pm I was pulling out my credit card. By 3am I had accomplished all the actions I intended to accomplish all weekend and didn’t. That was the best ROI on ten dollars I’ve ever received.”

If you’re in tech business you should care about changing the world.

That’s really all you should care about. About making a dent in the universe and about building something great and beyond useful. That’s all that matters. If you do build something great, make sure to let people vote with their money so that you know for sure if people are willing to part with their hard-earned cash in order to give you their vote of trust and confidence. And see for yourself if it doesn’t give you a “vanity boost” many times better than winning an industry award… and the best part of it is this: it will not happen once a year (like most award ceremonies do)… it’ll keep on happening to you every single day.