Recently there was quite a controversy around the tech company Basecamp. Their CEO announced a new policy forbidding employees talk politics and societal issues in the company. As a result 30% of their workforce left. In this post I’ll unpack why this wasn’t really just about politics. Why it was a much bigger deal than it sounds. And ultimately why I took it very personally and this whole situation makes me really sad and disappointed in them. 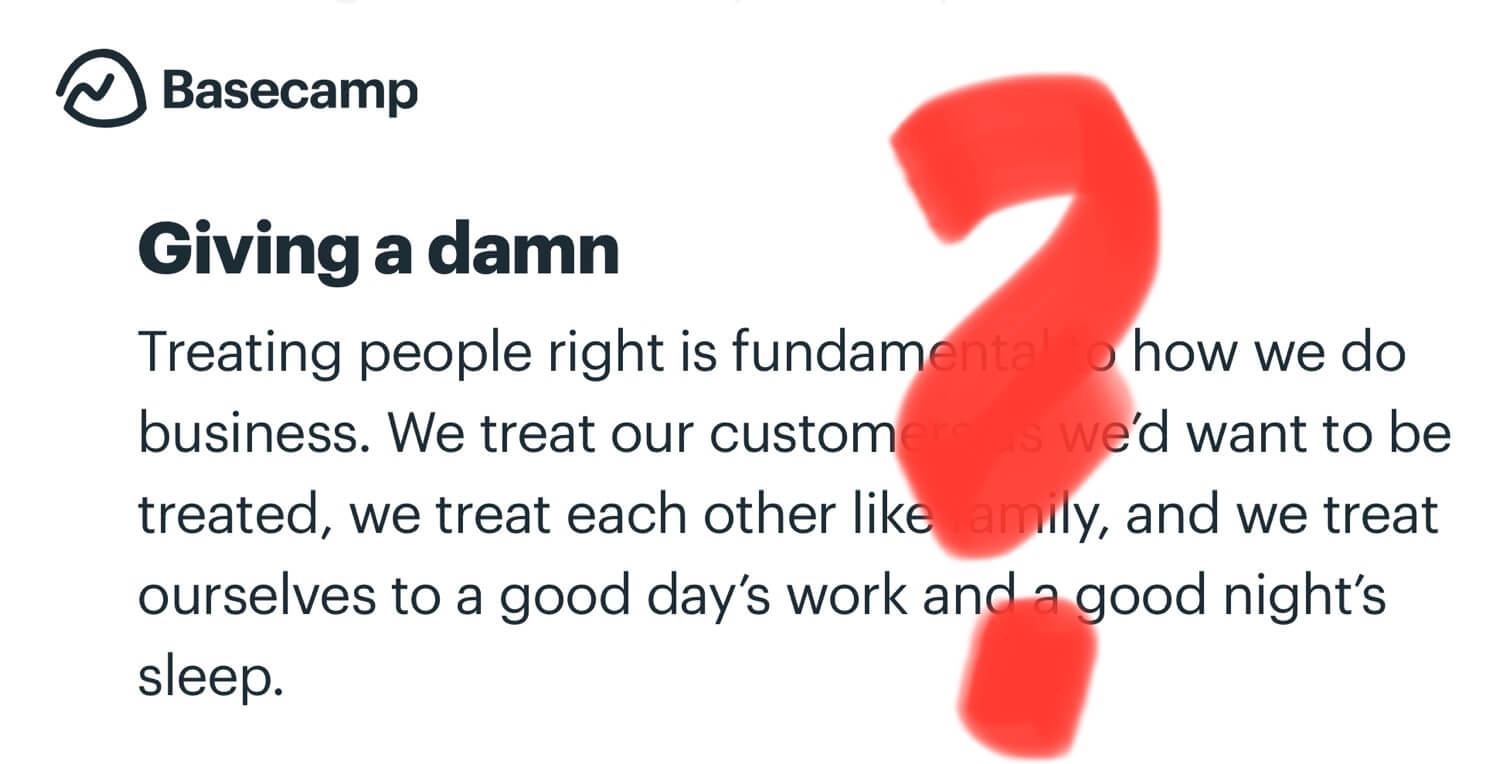 I’ve been following them from 2006 when I discovered their now-retired service called Backpack. As I was using this service and getting to know the company, I felt inspired. I learned from them everything - the code (JavaScript, MVC style of programming and much more), the way of running an online business, basically everything. They pushed me to start my own “Backpack for GTD” which I launched in 2007 as Nozbe and I’m running it successfully to this day.

I kept following them online and ultimately decided to visit them in Chicago personally for their “How we work” master class back in 2010, where I interviewed Jason for my Productive Magazine and also had a chance to chat with DHH, as well as Ryan Singer (who I admired for product design) and Sam Stephenson (who inspired me to learn JavaScript).

Basecamp has been promoting a better way to run a business

I like the fact that their software is very opinionated. You either like it or you don’t. You can see it clearly as they market their new email service “Hey” which is very different from Gmail. What I’ve always admired about them is the way they mastered communicating and selling their being different.

They’ve been always promoting a profitable and bootstrapped way of running business. It’s something I took to heart. Nozbe is completely self-founded and I’ve been running it profitably for the last 14 years. They lead by example, showing that you don’t need to swing for the fences or crush your competition. I loved David’s Startup School 2008 talk about it.

They were fighting the good fight against Apple’s policies last year with Hey. They took on Facebook. They were very vocal and I felt they were fighting it on behalf of all of us - small indie software developers.

Their way to build software through a free book “Shape Up: Stop Running in Circles and Ship Work that Matters” is brilliant. We’ve adopted the same way of working at Nozbe, especially for Nozbe Teams and it’s great.

Basecamp has always been showing how they’re giving a damn about their team and employees.

They published their handbook openly where they shared their generous vacation policy, sabbaticals and support for activities outside of work. I loved it and I introduced many similar perks in my company. They promoted 4-day workweeks which directly inspired our “Mighty Fridays” policy. They were offering a very generous San Francisco - based salaries openly calculated. This directly inspired our Salary Formula.

They all wrote it down in great books - first Getting Real, later Rework and most recently It doesn’t have to be crazy at work.

As for remote work, which I’ve been doing for the last 14 years, they were also trailblazers with their book Remote - office not required.

With all this, I’m VERY DISSAPOINTED with their recent decisions and actions (and inactions, too!).

It’s a classic example of cognitive dissonance. How can people, who have been doing things so well for so many years, who even last year were addressing #BlackLivesMatter movement, who have inspired me to be a better leader, a better entrepreneur, a better software maker… screw up so badly this time?

How is this really happening?

Basecamp’s strike one - new policies that silence people and stop treating them as… people.

First Jason announced a new policy of no-politics then David added his point of view. I was confused. Later Jason wrote about making decisions and David about diverse points of view - all in order to explain themselves and stick by their policy.

What struck me the most first was not so much the policy change, but their attitude shift:

No forgetting what we do here. We make project management, team communication, and email software. We are not a social impact company.

Really? After all these years standing for things? Giving a damn? Teaching us to stand up for what we believe in?

No more caring about people you work with? Seriously?

Again, with all due respect, but Jason and David know it all? As two white males at roughly the same age they have all the points of view? Really?

I couldn’t believe what my two gurus/mentors were doing. I wasn’t alone. Not really. I was in disbelief and I thought there had to be more to this. Turns out there was.

Casey Newton of the Verge uncovered the true story behind the change. Turns out the political discussion Basecamp was having internally was about a list of “funny customer names” that their employees were cultivating over the years. Some people pushed back on it, saying things like that start the Pyramid of hate.

Even one of their employees, Jane Yang, wrote an open letter to David and Jason, but internally David insisted on downplaying the situation while also attacking some of the team members that were pushing back.

Instead of calming everyone down and taking the time to re-evaluate their controversial decisions, they stuck to it. They didn’t want to take the L. They let their egos get better of them.

20+ people out of 58 left the company. I couldn’t believe it. Basecamp owners let 30% of their talented workforce just walk. And who left?

I couldn’t comprehend what had just happened.

First, how can Jason and David let these people leave so easily? Second, don’t both Jason and David have enough benefit of a doubt to deserve a second chance by their employees?

Turns out that to calm things down, David and Jason organized a Friday all-hands meeting with the employees but that meeting went very badly.

Two quotes stand out for me:

“My honest sense of why everybody is leaving because they’re tired of Jason and David’s behavior — the suppression of voices, of any dissent,” one employee told me. “They really don’t care what employees have to say. If they don’t think it’s an issue, it’s not an issue. If they don’t experience it, then it’s not real. And this was the final straw for a lot of employees.”

And when reading the reporting on that meeting, I can honestly say that Jason really didn’t know what to do, but also didn’t want to try to improve the situation. Didn’t even give it an honest shot.

“They just want to build cool shit all day,” the employee said. “They don’t want to deal with people, which is something you have to do as a manager … Jason and David just threw us away.”

This pains me the most. This is not how my role model business people should behave. They should fight for their team, for their employees.

A boss, after all, is supposed to be a servant!

Jason didn’t know what to do, but didn’t want to back down. David just completely ignored the situation. And they lost 30% of their workforce overnight.

And they lost my respect.

I can only speak for myself, but I’m sure that many other young CEOs and technology leaders were affected by this.

For Basecamp as business, they’ve got so many paying customers that I’m sure they’ll be just fine. For Jason and David, I hope they’ll learn from this and recognize their mistakes and own them.

I sincerely hope so.

For me, I’m still grateful for everything I learned from them. For all these years I’ve been following them. And I’ll keep appreciating their advice when it was just.

I’ll just need to remember yet again that everyone has their flaws, not everyone is perfect and many very smart and brilliant people are also capable of doing something really truly stupid.

And that a carefully built image over many years can be destroyed virtually overnight.

I have some ideas and I’ll blog about them soon, but please reach out to me on Twitter and let me know how as a leader you’re not tempted or pushed to do something really truly stupid.

I like my Nozbe team and I wouldn’t want to lose 30% of them overnight just because some discussions made me uncomfortable 🥵. How do you keep yourself in check?