We’re already 1 month in 2018 but I haven’t still posted my yearly review… and yesterday we were celebrating 11 years of Nozbe so I decided to finally post my yearly review - again, I’m writing this more for myself as a way reflect on last year and to be able to get back to it, but if it serves you as an inspiration, be my guest! Here goes: 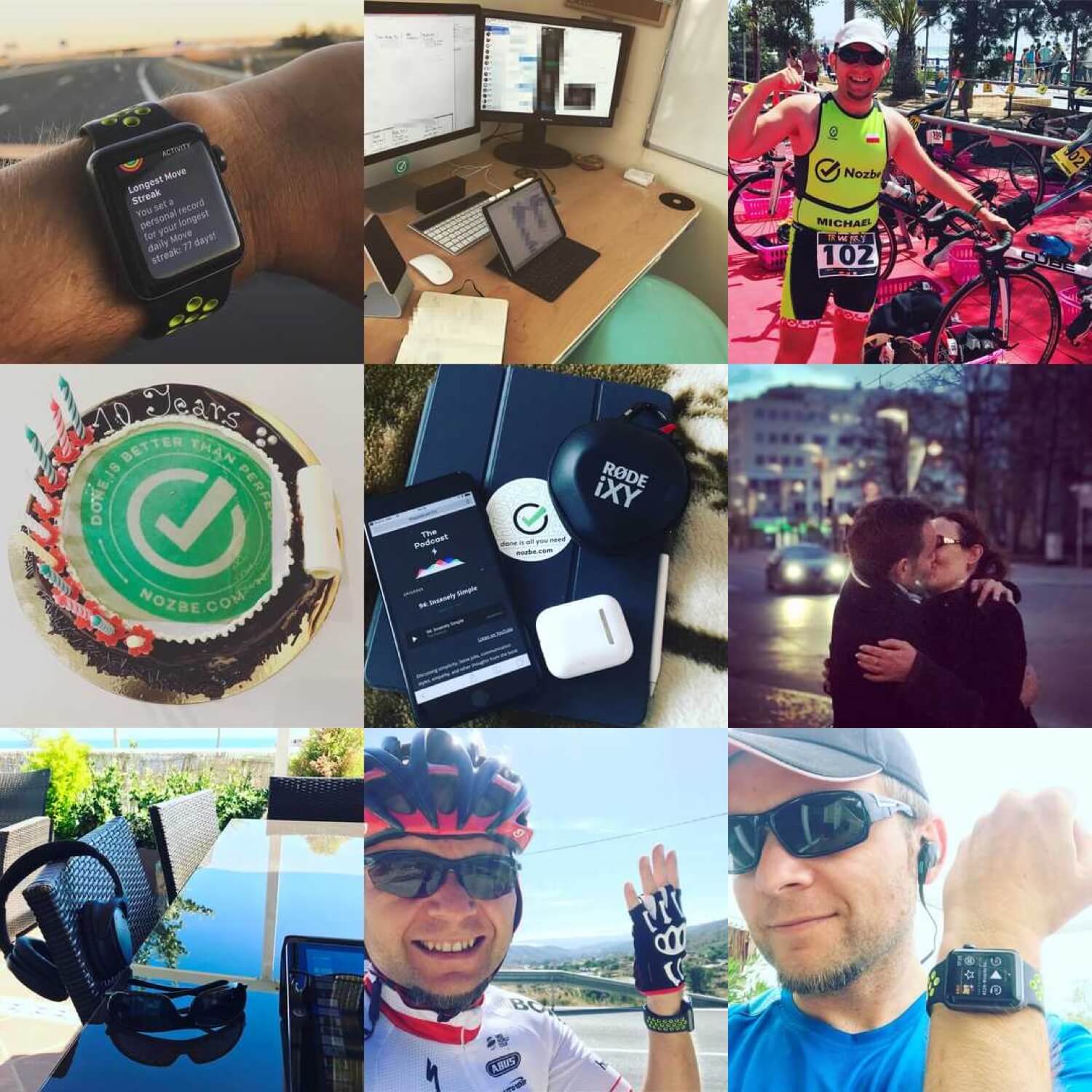 It was a tough year. On one hand business-wise it was a learning curve for me and the revenue growth wasn’t as I expected… but on the other hand I learned a lot and I’m putting these learnings to work this year. Privately it was a very good year. Here are some highlights:

It was a challenging but rewarding year. My wife had a significant success at her work - she’s been been working a few years for this… and in 2017 she really had to pull it all together and make it happen… and she did! I’m so proud of her. I was trying to be as supportive as I could and hope that I helped, but she really pulled it through. Now going forward she’ll be able to reap the rewards of all this. Again, wasn’t easy but it’s done and it’s good!

We finished setting up our small apartment in my home town. It’s so cool to have a second home close to my parents and my wife’s parents. Last Christmas was especially magical because we no longer “visited” our home town (both my wife and me come from Gdynia, Poland), we went there to live in our apartment and we got to spend a lot of quality time with our parents (and my children’s grandparents) because they’re all living very close to us now. It really feels like we have two homes now!

I set out to do 4 triathlon races in 2017 and did only half of that - one in May and one in October… so only half of what I set out to do… but both were “perfect races”. Because I started the year completely focused on new habits - running and swimming training, already the May triathlon went really good - very good pace in the water, strong bike ride and a decent run. I enjoyed every minute of it.

The October race was even better. After a summer of training I went out with much more power and finally beat my personal best - I did the whole course of an Olympic distance triathlon race (1.5km swim, 40km bike and 10km run) in 2hours and 35 minutes. The swim was smooth, the bike was fun and I felt I had lots of power there… and the run was really good - there were four 2.5km laps and with each lap I felt stronger and stronger… and eventually reached the finish line only 2.5 minutes after my triathlon buddy - Nick… where normally he’d be 10 or more minutes ahead of me. My goal for this year is to beat him in one of the races… but I know he’s also training really hard… so it won’t be easy.

I’m planning to do 2-3 triathlons this year, the first one mid-April, the second in June… and we’ll see about the third - probably some time in September / October. 2-3 races per year is a reasonable amount of racing for me - enough to keep me motivated doing training and staying in shape.

Overall I did a decent amount of training last year:

In 2014 I dramatically reinvented my body, by losing more than 10% of my body weight from 74kg (163 lbs) to 66kg (145 lbs) in a span of three months, and over the last years I managed to keep my weight in check around 68kg (150 lbs) but in the last few months I kinda let myself slide a little and after Christmas went up to a dangerous level of 72kg (159 lbs) so on Jan 8 I decided to get serious and start the year right and I’m back on the slow carb diet and I’m happy to report that I’m already at 69kg (152 lbs) and I’m planning to keep the diet until the end of March and get back to 66kg (145 lbs) and make 65-66kg my new default weight level. For good.

How was business? How was Nozbe?

Well, it was a mixed bag for me - a learning curve as I mentioned in the very beginning. I think I spread myself too thin and got involved into too many marketing ideas. This year I’m rethinking my job as the VP of Marketing at Nozbe and hopefully by the end of this year I’m going to fire myself from this role and have someone step into it permanently.

The good thing is that we’ve been learning from this and one of the biggest projects last year was to finally re-invent the pricing of Nozbe and guide people towards the new Small Business and Business accounts. We first introduced the plans at the end of November and over the last two months we’ve been monitoring the situation and analyzing customer feedback.

Pricing changes can be hard… and very stressful but in the end I think it was a success and we’ve just closed our best January ever with significant year-over-year growth, so I think we’re on a good path there. You’ll find more details on the new pricing in my celebratory Nozbe blog post.

New pricing is not just about getting more revenue, it’s about much more than this - it’s about showing people our new shift at Nozbe to team accounts, team productivity and most of all - that a business can be easily managed in Nozbe, by using shared projects and communicating everything through tasks. Without using email.

Many productivity apps focus on personal productivity, and we used to do that, too… but now we realized that we’re all more connected than ever. We’re not alone… and we should use a tool like Nozbe to not only get our stuff done… but also get stuff done with others! Now we’re saying: Nozbe. Simply Get Everythind Done… together!

Last year as a self-publishing experiment we shipped a book based on my video course: 10 Steps to Ultiamte Productivty in Polish and it was a success. Not only we’re selling it separately but most of all, we’re sending it for free to all of Nozbe customers who either buy Nozbe plan for a full year… or buy any of our business plans.

Now we’re finishing the English version of the book: 10 Steps to Ultimate Producitvity and I can’t wait to ship it to the customers and sell it on Amazon and everywhere else. I hope this becomes the new standard for personal and business productivity.

Last year we hired two new developers as we’re working hard on the foundations for the next decade of Nozbe… and this year, based on the lessons learned from 2017 I’m re-structuring the marketing team. All in all, 2017 meant lots of long-term investments in the product and in the team… but thanks to the fact that we’re a very frugal company and keep our finances in check, even despite the -3% revenue slowdown last year, we’re in a good position to think long term and reap the benefits of these investments later.

Speaking of investments, on the Nozbe blog I wrote how happy I am that we have the freedom to decide how we run our company, having no outside investors and ignoring VC and takeover requests. This freedom of running our show the way we want… and learning along the way… is the fundament of my happiness running Nozbe… and the feeling that we’re just getting started - although we’ve been in business more than 11 years now!

Get back to basics and continue the process of re-invention of the marketing team. One of the biggest shifts for me is to have NO BUSINESS GOALS for myself - but set out business goals for my team members and assisting them at getting these done. My role as the CEO is to help my team members succeed and when they do, our common goals for Nozbe will be met. Let’s see how this goes - it’s pretty exciting and most of all, it’s way out of my comfort zone, which is good!